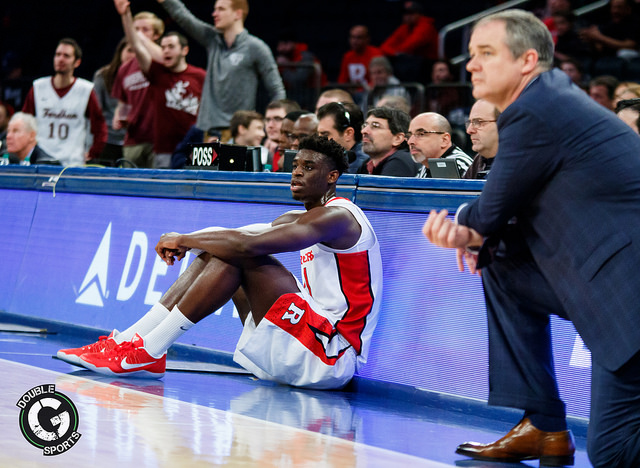 Rutgers did something that they couldn’t do all season, find a way to close out a game. 14th-seeded Rutgers overcame a rough shooting performance to beat 11th-seeded Ohio State, 66-57, Wednesday night in the first round of the Big Ten Tournament.  This was Rutgers first Big Ten Tournament win, after being bounced out the last two seasons, as the 14th seed.

Nigel Johnson was the hero on offense, scoring a game high 21 points, including a stellar 8 of 8 performance from the free throw line. He was also 3 of 6 from three-point range. After getting benched with about 14 minutes left in the Illinois game, never to see the court again, he responded like a winner tonight. To do so within miles of where he grew up in his return to Washington D.C., makes it that much more enjoyable.

Despite trailing 32-29 at the break, there was reason to be optimistic. Rutgers shot just 34% from the field, while the Buckeyes made 54%. Corey Sanders was held scoreless. However, he came out of the locker room at the half and made a point to get his team going, as he immediately made a three-pointer at the top of the key. Rutgers built a six point lead just three minutes into the second half, behind a 10-1 run from the unlikeliest of places, perimeter shooting. Issa Thiam, who had his best game in weeks, made his second three, while Mike Williams hit a long two.

Rutgers had a stunning +16 rebounding margin and +12 on the offensive glass. Rutgers was crashing the boards at every turn and were relentless throughout the game. It was like watching the underdog fighter continue to take punches from the bigger boxer, but they kept coming and the Buckeyes broke down in the second half.

It was a true team effort and Rutgers simply wanted it more than the Buckeyes. They outworked them the rest of the game after the slow start and they got key contributions from their bench. To see their passion and togetherness was truly special after the apathy and devisiveness displayed last season. They broke the will of Ohio State and it was a sight to see. In the end, it came back to what started their resurgence this season, defense and rebounding.

Rutgers: Faces sixth-seeded Northwestern in the late game Thursday night for the chance to play Maryland in the quarterfinals Friday. Rutgers lost both meetings this season with Northwestern, which is NCAA Tournament-bound for the first time in school history.

“They have very good players, it’s a really difficult game, especially on half a day prep,” Coach Pikiell said after the Ohio State game. “Northwestern is on a mission, but so are we.”

St. John’s Downs Georgetown to Advance to Next Round in the BIG EAST Tourney
CBI to Utilize Experimental Men’s Basketball Rules Including Use of Quarters
Posting....