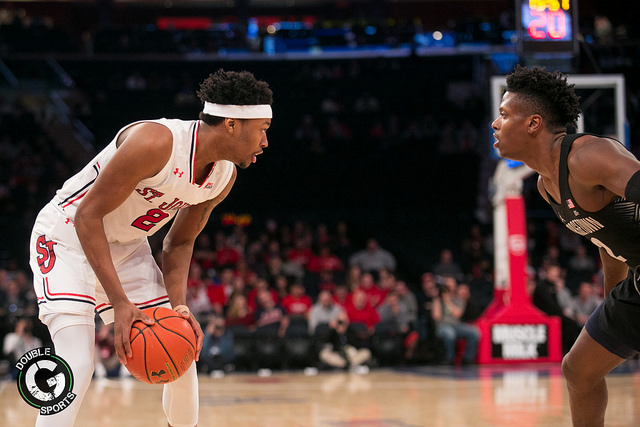 Shamorie Ponds, who has also been named the BIG EAST’s top freshman in terms of both scoring and steals, had a total of 17 points and five rebounds.  The rookie shot three of his seven attempts from beyond the arc, which gave him 73 for the season and the sole possession of second place on the St. John’s single-season record list, moving past Willie Shaw (71- 2000-01) and Avery Patterson (72- 2006-07).

Bashir Ahmed tallied 14 points, five rebounds and two assists with zero turnovers in the 29 minutes of play he had. Malik Ellison had one of the best performances of his college career with 11 points, eight rebounds, six assists and three steals. Darien Williams  was able to add 10 points in his 22 minutes of action. He also grabbed four rebounds and contributed a pair of blocks.  Federico Mussini and Tariq Owens each had seven points for the Red Storm.

St. John’s closed the first half with a 6-2 run that gave the team a 38-34 lead before heading into the locker room.

Georgetown, up 42-41, following a layup by the Hoya’s own L.J. Peak with less than two minutes into the second half, the Johnnies unleashed a 9-2. St. John’s was able to move ahead by eight, 51-43, with 14:42 left in the stanza. Mussini contributed a 3-pointer and a layup, with Ahmed and Ellison adding shots of their own which gave St. John’s its largest lead of the contest.

The Hoyas fought back hard by tying the game at 54 near the midway mark of the period. The Red Storm was then able to build its lead back to five, 64-59. Georgetown was able to trim their deficit down to one, 66-65, with five minutes left to play. The Johnnies were able to get their lead back by scoring six of the game’s next seven points. Ponds and Williams each made two free throws with Owens throwing down and putting the Red Storm up 72-66 with 3:38 to go in the second half.

Georgetown scored five shots in a row to make it a one-point game, 74-73, with only 42 seconds left. After a layup by Ponds was not able to follow through, Georgetown had possession of the ball with only 15 seconds. After a timeout, the Hoyas attempted two shots to win the game, but were unable to do so and the Johnnies won with a 74-73 victory.

The Red Storm has faced off against Villanova more than any other team in program history, with the Wildcats holding a 62-53 advantage in 115 all-time meetings.

The defending national champions won both of the contests between the two squads this season, topping the Johnnies, 70-57, at “The Mecca” on Jan. 14 before calming the Red Storm in Philadelphia, 92-79, on Feb. 4.