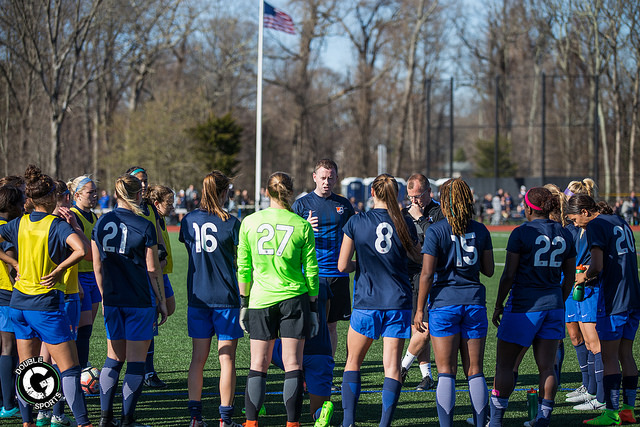 On Sunday, the Boston Breakers earned a 1-0 victory for the 2017 home opener at Jordan Field.  British striker Natasha Dowie scored the lone goal in the 37th minute.  Dowie beat SBFC keeper Kailen Sheridan  on a service from rookie Rose Lavelle. With the win, Boston break an 0-4-2 skid against New Jersey. The Breakers dominated possession and challenged Sheridan twice in the opening 8 minutes of the match.

Keeper Abby Smith made four saves for her side and earned her first clean sheet of the season. Her team maintained possession for 55.3% of the match, while clearing the ball 23 times in front of net.  With the win, the Breakers have already earned as many points (3) as they did through May 22nd last season.

Boston off to a good start

“We wanted to put in a big performance in front of our home crowd here,” said Dowie post-game. “Beautiful day, and [there was] a great crowd, and it just felt good. I was pleased to, obviously, get the goal.”

On the whole, head coach Matt Beard was pleased with the performance “mentally, they’re tough, we got a lot of different players that bring a lot of different skills sets.” Moving forward, Beard and the Breakers will look to refine their game, “now, for us it’s [about] working on that end product, that final pass.”

The Breakers benefitted from the return of veteran defender Julie King to the lineup.  The defense looked solid, and worked well with the midfielders to fuel the attack. The strong showing on Sunday will only benefit the Breakers heading into a match with the Seattle Reign (4 points) on Saturday, April 29th.

Nowhere but up for New Jersey

Meanwhile, head coach Christy Holly and his team have yet to put it all together.  Veteran Christie Pearce used the term “flat” to describe Sunday’s start.  More often than not, Sky Blue appeared content to have the Breakers control the tempo. With the speed of the attack, it was surprising see Holly’s side sit back.

The discipline to stick to the game plan was a folly of the New Jersey squad, leaving Holly very frustrated. “That was the worst performance we’ve had in my time here – and I mean going back to the first year I was involved as an assistant coach (2013 season).”

Only adding to the frustration was the tolerated aggressive attack from Boston from behind. Eighteen fouls were given in the game, 11 were called against Sky Blue FC.  Angela Salem was the only player booked after a collision with Kelley O’Hara in the 86th minute. When asked directly about the officiating of the game, including a potential missed penalty in the box, Holly remarked, “I’m not going to comment about it … if you’re asking, you know it was a penalty, right?”

However, despite the frustrations, Sky Blue FC offered no excuses for their level of play. Holly was firm that he and his team would review the game and make immediate improvements heading into week 3, “Certainly, that will be the worst performance this season.”

Unfortunately, Sky Blue may be without Leah Galton.  The second year striker went down after a hard tackle. “Leah is out for at least for the early part of this week, and potentially the weekend.”  When asked about Galton, Holly called her injury unfortunate, “It’s a shame. It was something that was mentioned to the referees five times in the first half, and it takes a player getting injured for anything to be addressed.”