The day is finally here. Super Bowl Sunday. We’ve done solid this season despite a rough mid-season stretch. The Kansas City Chiefs travel to Tampa, Florida to face the Buccaneers, hosting a Super Bowl in their own home stadium for the first time in NFL history. Only fitting that a player like Tom Brady is there to set that record as well.

Apologies on the now show Championship Sunday Weekly Taste a couple weeks ago, I did write one (both winners with Chiefs -3 and Bucs +3), but we were having some technical difficulties with the site. Focusing on the big game, I’ve known where I’m going since March. For those of you that were not aware, back in mid-March (17th to be exact) I decided to toss a future bet on the Tampa Bay Buccaneers to win the whole thing. While their opponent was supposed to be the Tennessee Titans, the Bucs still lived up to the billing just by getting here.

With so much personally invested in this game, I felt it necessary to mention the crystal ball I’ve been keeping in my back pocket this whole time. Regardless my eyes have been glued to this line the past two weeks, as well as the injury reports.

Kansas City Chiefs @ Tampa Bay Buccaneers (+3) | Will this be the symbolic passing of the torch from Tom Brady to Patrick Mahomes?

The Tampa Bay Buccaneers have had an up and down season. At times, they looked like a legit Super Bowl contender, while other weeks we questioned if they would even make the playoffs. I’ve mentioned this a couple times in the past month or so; the turning point in their season was after that October 27-24 loss to these same Chiefs. Yes, the competition softened up, but these Bucs found their groove behind Tom Brady.

For most of the season, it felt like there was an identity crisis on this offense, but since Week 14, that’s a thing of the past. Offensively, it’s important for them to stick to what got them here; have a consistent enough ground threat, while Brady works his magic.

Luckily, it looks like Antonio Brown should be returning to action. With Brown likely back in the fold, it should dictate more favorable matchups for this Tampa Bay offense. However, the important part, aside from no turnovers and solid protection, is the magic number of rushing attempts; 25. 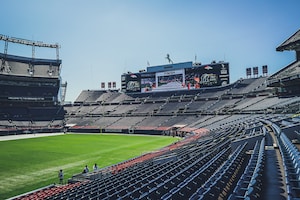 Photo by Free To Use Sounds on Unsplash

Switching sides, Kansas City has been the best team in the league all season. They’re nearly impossible to beat; it’s just that simple. Despite their level of skill, it’s so difficult to repeat as Super Bowl champs. Against one of, if not the best, run defenses the past two seasons, they may find it difficult to turn out consistent and efficient carries on the ground, which leads to more pass attempts.

While I predict Bucs DC Todd Bowles will not let Tyreek Hill go for over 200 yards in the first quarter like last time, he will force somebody else to beat them. That somebody, most likely, is stud Tight End Travis Kelce. Kelce had another phenomenal season amassing 1,416 receiving yards, which was good for second in the NFL to only Bills WR Stefon Diggs.

Oh, by the way, that also set an NFL record for most yards by a Tight End in a single season. Point being, he will probably get 10-15 looks and eat up underneath real estate, therefore it will fall on Bucs X Factor LB Duo Devin White/Lavonte David to have the best games of their lives. If the Chiefs are going to pull this out though, their defense will have to smother Brady forcing off timed throws, otherwise it could be a long night for them.

The line ends here. Tom Brady has pissed on Father Time riding to a record 10th Super Bowl Appearance. He is viewed as the best Quarterback to ever play the game by most. The guy who likely succeeds him and takes up his mantle is on the other side. Will this be the night we see Brady pass the symbolic torch to Patrick Mahomes, or will he keep proving age is just a number?

Fun Fact: Teams that wear white in the Super Bowl are 8-3 since 2010. Tampa Bay will be wearing white.