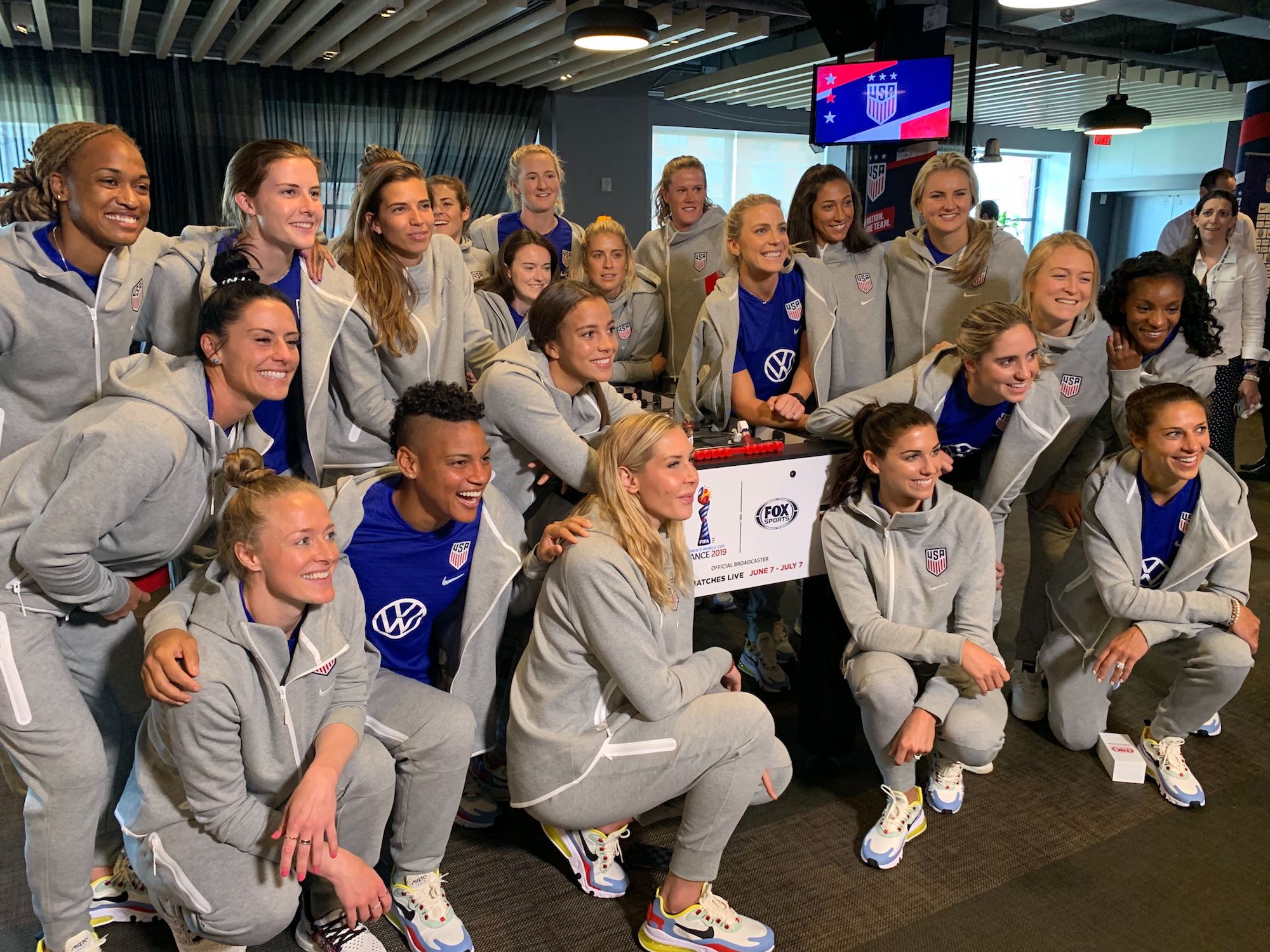 NEW YORK – How does one go about selecting 23 of the best soccer player in the country onto one roster? Just ask U.S. Women’s National Team head coach Jill Ellis, who said there are 23 X-factors on the 2019 World Cup team.

“Ultimately as a coach, you’re picking the best players who you think can help you win,” Ellis said during her media day press conference. “It doesn’t matter whether they’ve been on this train for two and half years, 10 years or the last three weeks. It’s about making sure we have the most talented players and the most cohesive group we think we can win with,”

Forward Tobin Heath has been one of the most consistent members to the squad.  The Basking Ridge, NJ native has scored 29 goals and assisted on 37 in 149 career appearances. Heath, 30, is no stranger to the World Cup stage as she prepares for her third stint. Known for her zany personality she touched on just how much that is carried onto the pitch.

Tobin Heath on where her free spirited personality and attitude comes from and how she brings that to the pitch. #USWNT #WorldCup2019 pic.twitter.com/uFFEYLZAJ2

“I think there is a very strong duality to my game,” Heath said. “Obviously I’m very creative, intuitive and I like to entertain and see entertaining football but there’s an intense desire to win and be effective.”

Forward Carli Lloyd is the most senior member of the group and will be participating in her fourth World Cup in June. While she said she feels the sharpest she’s ever felt before, she admitted this might be her final go-round. Most importantly, she’s purely excited for the opportunity to play.

“I’m not look at it as if this is the end,” Lloyd said. “There’s definitely a few years left in me to continue to play wherever that may be. Physically this is the fittest I’ve ever felt. I feel calm, hungry, motivated and excited. This has kind of been a different feel for me going into this event than all other events I’ve gone through. Just savoring every moment I think is the biggest thing for me to focus on.”

Ellis selected a total of 11 players who will be competing in their first World Cup tournament like defender Abby Dahlkemper and midfielder Sam Mewis. Dahlkemper mentioned that she found out she made the roster in early May when she received a call from her head coach.

Abby Dahlkemper on playing in her first World Cup pic.twitter.com/mF76jOY1fP

Dahlkemper said that many of the senior members of the team encouraged her to live in the present moment and just enjoy the whole experience with the national team.

For Sam Mewis, the helpful hand came from someone she’s known longer than any of her National Team teammates; her older sister Kristie.

“One thing she has always said was to keep the one thing that makes you special,” Sam said. “Sometimes it can be my personality or my dribbling and speed or my aerial presence. Just making sure I have a couple things I know I’m good at and keeping those things sharp are important for me. Having my family’s support is so important.”

Throughout this entire experience comparisons have been made to the World Cup championship team in 1999. With this year being the 20th anniversary of the team’s amazing run, those similarities are more prominent than ever.

Alex Morgan talking about the championship team in 1999. pic.twitter.com/WqL1hypvAo

“The 99ers had a huge impact on me growing my passion to want to play,” captain Alex Morgan said. “I really enjoy spending time with them and they’re great people who shaped the history of this program and I will be forever grateful for that and now it’s our turn to make our mark.”

Team USA will play its last international friendly match on May 26 against Mexico in Harrison, New Jersey at Red Bull Arena. The team begins its quest for the 2019 World Cup in France on June 11 against Thailand.