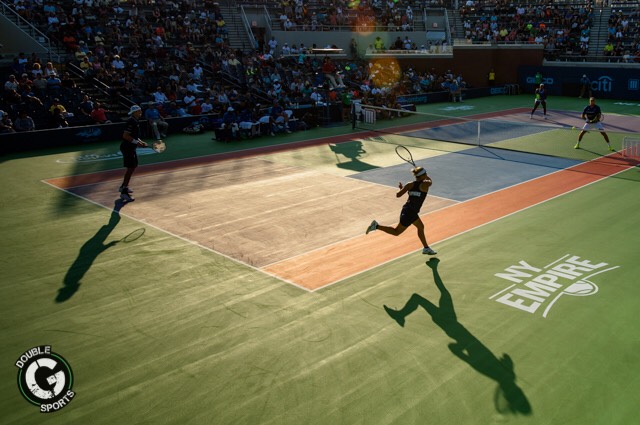 Will Americans Continue their Success in 2018?

There were many good stories in the 2017 tennis season. The year saw Roger and Rafa regain their elite status on the men’s tour, with both winning two grand slams a piece. The 2017 tennis season also saw next generation players such as Alexander Zverev and Denis Shapovalov introduce the world to their talents and potential.  One major standout however, was the excellent play seen from American players.

On the women’s side, the years first and last major featured an all-American final.
At the Aussie Open, it was a scene many tennis fans are familiar with (although it hadn’t happened since 2009), an all Williams final. Venus and Serena met in their eighth grand slam final. Serena, as she tends to often do, won and surpassed Steffi Graff with the most grand slam wins in the Open era.

In New York there was another all-American grand slam final, but this one featured neither of the Williams sisters, something that hadn’t been done since 2002. Instead, it featured players, whom many believe are in succession to take over for the Williams Sisters’ spots; Sloane Stephens and Madison Keys. Even before the finals, the semifinals had featured nothing but American women, a feat that hadn’t been seen since the ’80s (Coco Vandeweghe and Venus Williams were the other ladies). Though the final wasn’t very entertaining, Keys managed to win three games. It showed that all will not be lost when the Williams sisters decide to hang it up. The American women also won the Fed Cup. A feat that hadn’t been done in 17 years.

Though the emergence of American women was somewhat of a surprise, the key wins of some American males was even a bigger shock. Sam Querrey once again shined at Wimbledon taking out world number one, at the time, in the quarterfinals. With the win Querrey became the first American male since Andy Roddick to make it to a grand slam semi, where he would lose.

Wanting to get in on all the success, Jack Sock begin to make due to all the potential seeping in his bones. Jack won the Paris Masters, something that hadn’t been since Agassi in over five years, and with the win moved into the top ten and qualified for the World Tour Finals, an accomplishment that hadn’t been done since Andy Roddick.

Now many Americans fans would like to know if the Americans can carry this momentum into 2018. With Serena coming back and probably reestablishing her dominance in the sport, tennis fans are questioning whether the other American women will keep up their successful run. Will Sloane be able to build on her success? After winning the US Open Sloane didn’t win a match for the rest of the year. Will Sloane be able to regain her footing in the new season? That is something fans will be looking to see.

Also, can Madison Keys win a major after having a taste of a grand slam final. Keys certainly has all the weapons to win a grand slam. The question remains will she be able to play seven complete matches, instead of six, in a span of two weeks. What about Coco Vandeweghe? She made it to two grand slam semifinals in 2017. Can Coco make it to a grand slam final in 2018? Can she win it all? Coco was instrumental in the US winning Fed Cup, as to whether she can bring that confidence into her singles in 2018 will remain to be seen.

Venus Williams also deserves a mention. She made it to two grand slam finals and the year end championships. Will her sister presence cause Venus to fall back or can she continue her solid play? Another storyline the tennis community will be paying attention to.

On the men’s side many are question whether Sock can keep up his good play now that he has broken into the top ten. Sock has had a reputation for being a little shaky mentally, but with his recent success it will be interest to see if Jack has truly turned a corner. Jack’s forehand and athleticism are world class and if he finally has gotten it together between the ears, he will be a force in 2018.

Then there is Querrey. Besides making to the semifinals of Wimbledon, Sam made it to the quarterfinals of the US Open, where many believed he had real chances to make it to the finals, had he gotten pass Kevin Anderson. Will Sam be able to make good on his opportunities if he is given another chance to go that deep in a major? Can he become a contender all the other tournaments beside the majors? 2018 will be a critical year, if Sam wants to build on his recent successes.

Finally, what about the young guns, Tiafoe, Donaldson and Fritz? Can they have a breakout like some of their other Next Gen peers of different countries? There are a lot of young talented Americans but at some point, that potential has to make due on its promises. Will 2018 be the year that happens?

2018 stands to be an exciting year and if Americans play just as well as they did in 2017 then it will be a successful year for the red, white and blue.