Now with the Guardians, Antoniello previous worked for the Golden State Warriors and Brooklyn Sports & Entertainment.

Gina Antoniello is the Head of Communications for the New York Guardians of the XFL. In this role, she is the primary architect of the communications strategy, overseeing both business and football communications.

Prior to joining the XFL, Gina supervised both venue and team strategic communications for two of Brooklyn Sports & Entertainment (BSE) properties: NYCB LIVE’s Nassau Veterans Memorial Coliseum and the Long Island Nets from 2017-19. In that role, she spearheaded communications for Nassau Coliseum’s franchises, including concerts, boxing, college basketball and family shows, while additionally supporting Barclays Center, the Brooklyn Nets and the New York Islanders.

Prior to her role with BSE, Gina spent three years with the NBA Champion Golden State Warriors as Director of Public and Community Relations. During that time with the Warriors, Gina assisted with media operations for two Playoff and NBA Finals runs as well as led media operations and strategic communications for two NBA G-League Showcases as the host team.

Gina has appeared on national and regional network television as a courtside reporter for G-League basketball games where she earned the sideline spot on broadcasts for ESPN, NBA TV, YES Network, and MSG. 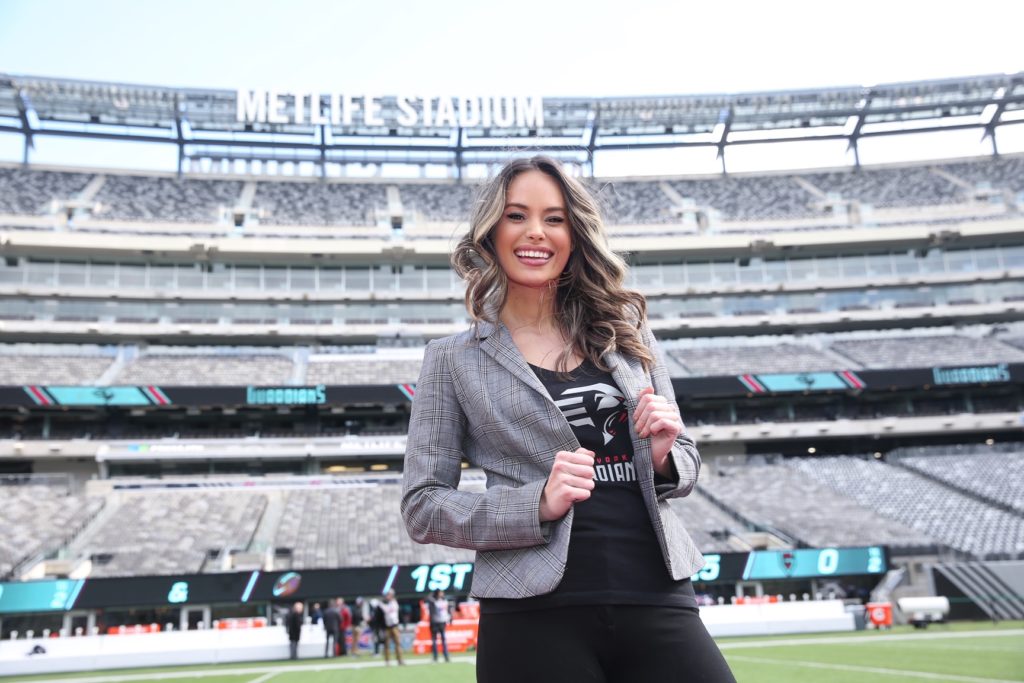 Nick Durst, Double G Sports (DGS): Where did you grow up and what was your childhood like, did you play any sports?

Gina Antoniello (Antoniello): I am a first generation American, my family came from Italy. I was born in Brooklyn and that is what I identify with. Even when I moved to New Jersey, we went back every weekend, all of our family was there we’d bring back a pie from L&B Spumoni Gardens. I am from this area, I love this area, my soul is here.

DGS: Where did you go to college and what did you study?

Antoniello: I ended up going to Wake Forest where I majored in Communications. That is where I got exposed to the business administration side of sports. I was also in the dance company there. I then went and got my Masters from Columbia University.

DGS: What is your first sports memory?

Antoniello: Growing up in the early 90s, my Dad had a work project out in San Francisco and I lived in a Jerry Rice jersey. I would even wear it to church. Being with my Dad and wearing the jersey while being around a winning team was very exciting. I was around 6 years old at the time.

DGS: Was there a particular moment when you realized you wanted to work in sports?

Antoniello: Watching the Syracuse Orangemen’s National Title win in 2003. I thought to myself how cool would it be to be working with the players? I think I was in middle school.

DGS: How did you get your first internship and where was it?

Antoniello: It was the IMG Sony Ericsson Tennis tournament and I was working in ticket sales. I think I was 18. It was in Florida, I went and worked the whole thing. It was my first life experience working in sports.

DGS: How did you end up landing your first job and where was it?

Antoniello: I was networking like crazy on LinkedIn and sent notes to folks at the Nets in the entertainment and events space. Paul Kamras, who is still there today as the head of event presentation with the Brooklyn Nets said they were holding an open audition for in game hosts. There were maybe 500 people there and I actually got the job, how crazy? Paul has been a great mentor.

DGS: What was the most memorable game you covered as a sideline reporter?

Antoniello: It was an NBA TV game and it was the Long Island Nets vs Maine Red Claws. It was a sideline/analyst role. What ended up happening was exactly what I predicted in the pre-game. You spend hours of preparation and everything I predicted came together and it felt awesome.

DGS: Do you have an NBA Championship ring from your time working with the Golden State Warriors?

Antoniello: It has been a few years, I rarely take those things out. I had some young NBA fans over my house and I let them wear it.

DGS: What was the atmosphere like in Golden State with everyone knowing the Warriors would be in the finals?

Antoniello: It was just a winning mentality throughout the whole organization. We knew we were going somewhere special and to see the fans catch on and support the team was unquestionably something I will tell my grandchildren about.

DGS: Have you ever had a moment where you had to pinch yourself and say I cannot believe I am working in sports?

Antoniello: Every game. Going from three employees at the Guardians to where we are today and the overwhelming embrace from a new fan base has been special. 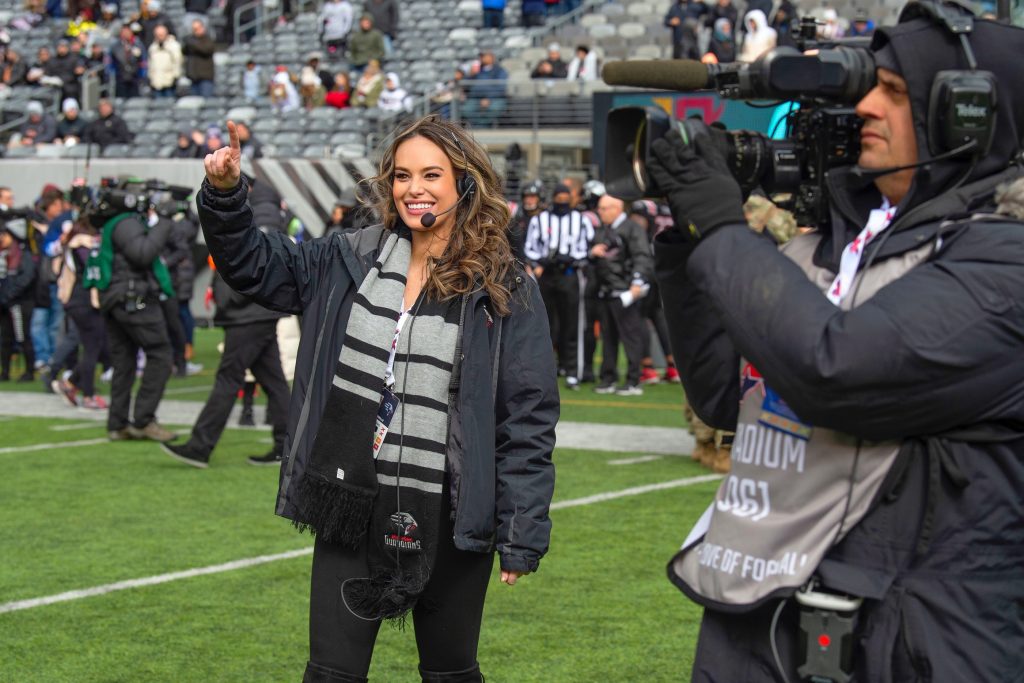 DGS: How did you get approached by the XFL to become the director of communications and media relations for the Guardians?

Antoniello: I never imagined leaving basketball but the XFL recruited me. I wanted to know what I would be turning down. I had the benefit of what ended up being like a 6 to 7 week interview process and I met all of these people involved who came from iconic brands like the NBA and NFL. By the end of the process I was like I am going to be so sad if I don’t get the offer. It was 100% the right career move and I am really enjoying myself.

DGS: How did your time as Senior Manager of Communications with Brooklyn Sports Entertainment Global prepare you for the XFL?

Antoniello: The rate at which they moved and expanded since 2012 made it a dynamic work environment. It made me very flexible, patient and tougher.

DGS: What excites you most about the XFL?

Antoniello: The story of our players. The hunger and desire in which they are trying to prove themselves is incredible.

DGS: How has it been working with Coach Kevin Gilbride?

Antoniello: I have to pinch myself everyday when working with him. It is not just about winning for him, this is his return to football. To see him build a team from the ground up has been a gift. He is a real life person, he does interviews and then asks me what I thought, he has four decades of experience and respects me. That’s who he is.

DGS: Have you met Shane McMahon and was he intimidating?

Antoniello: I have met Shane a few times. When we were going over the rules of engagement for our broadcasters, he was there. He has been very visible and available. He was in the locker room with us at the first game. This is something the McMahons are excited for and it gives us the ultimate confidence. He’s such a great guy.

DGS: If the Guardians win the championship, will there be a ticker-tape parade down the Canyon of Heroes?

Antoniello: Haha, I feel like there should definitely be something. People don’t know what to expect, recognition and fandom is something that is earned. If we are lucky enough to take home a championship, we will find a way to celebrate with our community around here.

DGS: Who are some of your favorite athletes to watch play?

DGS: Outside of sports, what are your hobbies?

DGS: You are an adjunct professor at Columbia and are now going for your PhD in sports management from Troy University, how important has education been to you?

Antoniello: It has been the most important thing. It is central to my identity. Long term I see myself as a professor or researcher. It is my biggest passion.

DGS: What would you say to someone who asked you for the blueprint to get a job working in sports as either an on camera talent or behind the scenes?

Antoniello: Show you are willing to do anything and be great at it. Network, building relationships and showing anyone who gives you responsibility that you can hustle and put all of your effort into it to be noticed.