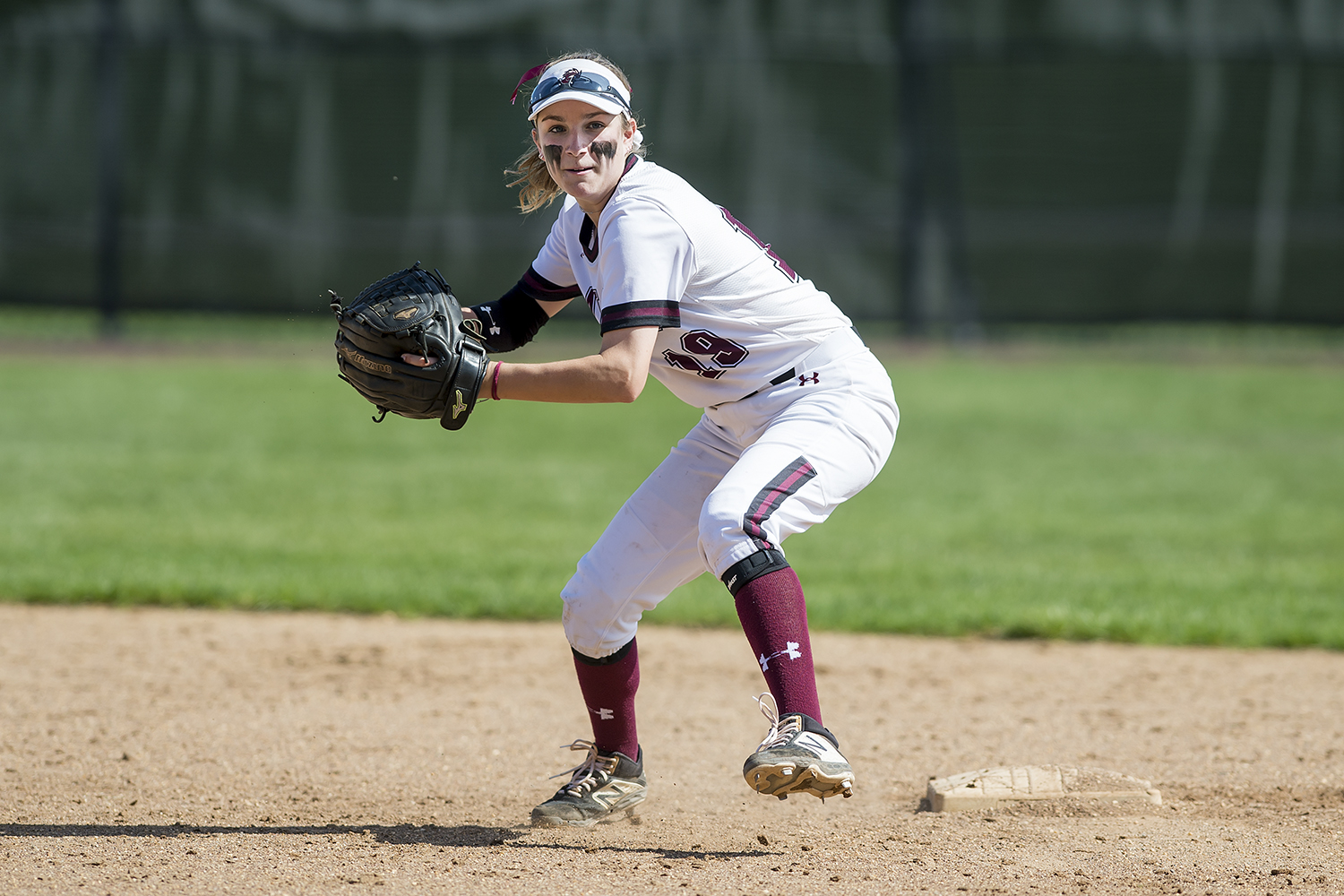 Ramapo College junior, Carli Egan, excels in classroom and on the softball field

While growing up, Carli Egan played basketball, soccer and softball but in the back of her mind, softball would be the sport she continued with at the collegiate level. Coming from a family that was big on athletics with both of her brothers playing baseball and basketball, Carli received tremendous support from her parents.

At Washington Township High School in Gloucester County, New Jersey, Eagan earned First-Team All-Conference and Second-Team All-Conference Honors. In 2015, Egan and the Minutemen won a state championship. Aiding in her rapid development on the softball field, Egan played for the South Jersey Mystics. Not only enjoying success on the field, Egan excelled in the classroom as a member of the National Honor Society and Business Honor Society.

“In high school I played softball, had a great experience and got to play with all of my friends,” Egan told Double G Sports. “To win a state championship was amazing and one of my favorite memories. Coach Tracy Burkhart was one of the first coaches that showed me not only how to balance school but softball as well. Bouncing back while picking up the pieces, balancing out failure, how to rebuild and fight through the struggles. The first time I achieved something and I wanted to do it again and made it more fulfilling to myself.”

When it came to deciding on a college to attend, class sizes and knowing people were important to Egan. “Early on I visited WPU (William Paterson University) but when I visited Ramapo College, I knew that I wanted to go to Ramapo and how small the classes are with only 20 people and I wanted to know my professors and talk with them 1 on 1 compared to going to a bigger school with 50 kids in a class and never being able to make a connection with a professor,” Egan explained. “You walk around campus and see people you know and not a huge school where I barely know five people.”

In her freshman year, Egan started in 34 out of 39 games play, hitting .298 with 15 RBI, 28 hits, 16 runs scored and defensively registered 20 putouts. “When I first came in with four or five other girls, there were mostly returners and in that type of scenario it’s easy just to follow everybody else and do whatever they are doing,” Egan remarked. “I always looked up to the juniors and seniors. They taught me so much and explained to me every part of the game. My freshman year, Harper Patsko taught me how to play third base. Just watching how they carried themselves and held themselves accountable for the things they were doing.”

“I played second base and right field my freshman year,” she continued. “The first game I ever played was so nerve-wracking because you are competing at a different level. You have no idea what you are going to walk into but remember how nervous I was and felt like I was going throw up every day and once the first pitch occurred it went away. The NJAC (New Jersey Athletic Conference) is a whole different monster in itself and you have to be focused on every single play and if for that one second if you are not absolutely competing and locked in you are going to mess up and make a mistake.”

“You have to step out of yourself and take care of your body,” said Egan. “I’m one that doesn’t like to take reps or sit out of practice. Going to the trainer every day is important, staying hydrate and eating right. It’s the basic things that will help you physically but mentally because the season is mentally draining. Staying on top of your health and making sure before you put your body out there every single day. It all starts with my teammates who give me that drive, motivation and help me through the personal process.”

“In the winter, I’m going to the gym five times a week so I’m conditioned for practices that are really draining and hard. Hitting is my favorite part of the game and I do that three times a week. Fielding is really hard in the winter but you do what you can and it’s kind of second nature at this point and I don’t really think about it. My teammates push me every day to give it 100 percent.”

Egan gives credit to the coaching staff, led by Head Coach Bridgette Quimpo, Assistant Coach Ashely O’Beirne-Stever and Volunteer Susie Matsutani. “Bridgette Quimpo is one of the best coaches I ever had, she not only cares about athletics, the way we perform but academics and your personal life,” Egan said. “It’s easy to follow her and do the right thing for Ramapo. Coach Susie is fantastic coach and has helped me out defensively. She will explain something to you a thousand times. Coach Ashley is our pitching coach and pushes everyone to do their best.”

Last month, Egan earned a very prestigious honor by being named Ramapo College 2020 NJAIAW (New Jersey Association of Intercollegiate Athletics for Woman) of the Year at the 28th Annual Girls and Women In Sports Day Celebration that was held at Seton Hall University.

“Honestly it was really nice to be recognized and appreciated by the school,” said Egan. “Nice going to the banquet and seeing all the different athletes and women being recognized. I think it’s huge for women in sports, where we started and now where we are. At Seton Hall it was really cool to see all the people representing their schools and knew some of them and played softball with them. To see us playing softball since we were six years old and now walking across the stage and getting award for the so much work we put into. It’s incredible how we have achieved not only in sports but academically and in the community. People don’t realize how much work you have to put in things.”

“To be recognized by Ramapo College as Woman of the Year is really nice. There are women here every day doing the same exact things as I do. The first time I found out, my coach (Bridgette Quimpo) texted me, and I was really excited and told my parents and all my friends.”

Majoring in Accounting, Egan has continued to flourish in the classroom. In her sophomore year, she was named an NFCA All-America Scholar-Athlete and All-ECAC (Eastern College Athletic Conference). “It’s all about time management and saying I can’t watch TV tonight because I have to study or practice in the morning and be responsible,” Egan commented. “We have to give our professors a schedule of our games, when we have to miss class and have an away game.”

Entering her junior year at Ramapo, Egan is reflecting on how time has been passing by so quickly, the importance of being an upperclassmen and part of a winning culture. The past two years, the Roadrunners have won 48 games, 25 NJAC regular season games and reached the NJAC Tournament twice along with one NCAA Tournament appearance.

“It’s really cool to see it from both sides, honestly when I was freshman I thought when you were a junior and senior all you have to do is help people where to go and what to do,” said Egan.” “There is so much more to understand and where everyone is coming from and trying to get everyone on the same exact page. To be a part of a winning tradition with Ramapo softball is great, and it’s important to uphold the legacy that people have left before.”

“Putting in the work, going through the best and worst with the 20 same girls is incredible. In 2018 we advanced to the NCAA Regionals, you get there and realize what you have done with 20 other girls the past two or three months and worked every single day to get better and reaching this point is exciting and surreal. I was thinking the past 10 years of my life has gone by so fast and I have two years left of what I love to do.”