Hey there, it’s Michelle.  This is my very first column that will be done in a manner wherein I share my thoughts and perspectives, in a manner that’s a bit different than the everyday sports articles I otherwise share on this site.  Before I begin, I would like to thank the founder of this site, Gregg Snyder, for having faith in me and trusting me to use this column in a manner that will allow me to maximize my potential.  It means the world to me.

This is going to be very short and simple, as I have been writing for much of the day, and assuming you’re reading this at the end of the day, I realize you may also be winding down.  So I promise nothing too heavy, tonight.

What I wanted to share  has to do with my weekend wherein I covered the boat race that took place down at the Jersey Shore.  Can you even imagine the amazing blessing it was for me to be asked to cover this race, wherein DoubleGSports was being asked to root for a boat named Hurricane Force?  You see, I was one of those people, who did not heed the warnings, and almost died the night Hurricane Sandy struck the coast of New Jersey.  Most people who follow me, at that time, thought I lived in Las Vegas, but I was actually working in a remote capacity, for a radio program that is broadcast live in Las Vegas.  At that time, I actually lived a block away from the beach in a small coastal town in New Jersey.

The night the hurricane came, I was unaware the storm would be so horrid.  You see, I do not watch television much, and the previous year, I had been evacuated.  I had brought my two dogs to my friend’s home, and then a tree fell on my truck.  Ironically, I could not get back to the island I live on, for almost a week.  Her electricity had gone, and I felt horrible being there for so long.  When I did arrive back home, there was hardly any damage, so I suppose I thought that the storm warnings that came about Sandy, were just exaggerated.  Never again, would I make such a terrible mistake.

The night the hurricane came, my son was with friends, and I was home in my condo, with my two golden retrievers.  My son ended up coming back because he did not want to leave me alone.  We both trusted our intuition and felt we should stay.  We just did not want to inconvenience anyone with our dogs, and the folks at the local hardware store, told us they thought we’d be okay because we were on the second floor.  Oh my God, we almost died.  It was the scariest night of my life.

As the water raged through the street, I recall going outside, to move my truck to higher ground.  Of course, that did not matter, in the end there was no higher ground.  The waters came slowly, but eventually the water was coming into my stairwell.  We could not leave, and we just prayed.  We eventually went up to the attic, and we did our best to keep our mind off of the water that kept rising. We listened to the songs by Creed over and over again, and called everyone we knew and loved to say, “Good-Bye.” I got on my knees and prayed for forgiveness for not having taken my son off of the island.

My son, did not cry.  He just said, “Mom, now I know what it was like for those people in Katrina.” and then eventually he punched his fist in the air, and said, “Mom, I don’t want to die.” Thankfully, we did not die.  My dogs made a mess, as they were so scared, and of course I could not take them out and walk them.  They sensed our fear, and they knew danger was near.  The moon was full, and I sat on the balcony of my condo and watched the water come down the street.  I prayed, prayed, and prayed again.  I know so many people do not believe in God, and that’s their prerogative.  Yet, for me nothing need be explained for me to find peace in prayer.  I was at peace with dying, but I just wanted my son, to live.  He had yet, to truly live.

I was so sorry for not listening to the weather reports.  So if I may, use this column to say, that it was such a blessing for me to be asked to cover an event that was to help those who live at the Jersey Shore.  In addition, to be rooting for a boat, named Hurricane Force. 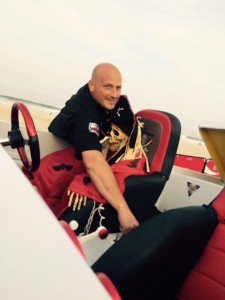 Throughout the upcoming weeks I will be learning more about this sport, and share more about the awesome guys who race this boat.  In the photo above, you’ll find Joe Wnek.  He’s working to share about the sport, and help to bring awareness about the devastation that the hurricane caused so many in the State of New Jersey.  It was my pleasure to meet him and his crew.  I am so looking forward to the next race, as I have an affinity for those who ride.  The reasons why, will be shared in an upcoming article, when I talk more about my idea for my site, www.rideinsane.com, which is just a crazy idea I have to build this amazing site for those who love to ride.