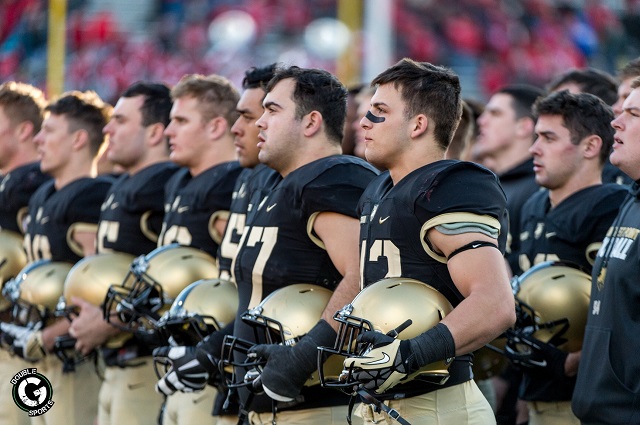 At a press conference Tuesday, Governor Chris Christie took the podium to announce that on December 11, 2021, Army and Navy will take the field.  This will be the teams’ fifth time meeting in New Jersey.  Joining the Governor was John Mara (President, CEO, and Co-owner of the New York Giants, Neil Glat (President of the New York Jets), Wayne Hasenbalg (NJ Sports & Exposition Authority), Jim Kirkos (Meadowlands Regional Chamber) and Ron VanDeVeen (President and CEO of Metlife Stadium).

The Governor (a longtime Cowboys fan) poked fun at Giants co-owner, Mara. He spoke about a phone call he received from Roger Staubach.  The former Navy and Cowboy quarterback is co-chair of the host committee that brought the Army-Navy game to New Jersey.  He phoned Christie several months ago to talk about securing the game for the Garden State.

Like the Superbowl, which Metlife hosted in 2014, this will bring an economic surge to Bergen County and Northern NJ.  The Army-Navy game brings a projected 50,000 people and $30 million dollars into the state.  The Army-Navy game is a celebration that lasts for a week. It will feature many events including a gala at Ellis Island.  The gala serves as a “pep rally” for both teams before ending with the storied match-up.

Significance of Metlife Stadium to the 122nd Game

So why NJ? The selection holds special significance as it will honor the 20th Anniversary of September 11.  The Army-Navy Game will be played with the altered NYC skyline as its backdrop, providing extra emotion to a historic rivalry.  Chet Gladchuk, the U.S. Naval Academy Athletic Director talked about the selection of East Rutherford for the 2021 game.  “It was a factor in our thinking. Trying to find a way to make it work here in the shadow of ground zero.”

Gladchuk then went on to speak about the significance of the game.

“Something so revered and so important and so much a part of our lives that happened 20 years ago.  That will make this a moment of reverence, a moment of unity, an opportunity for a nation to come together and rally around something where we can display our freedom and can display the next generation of leadership those being our cadets…”

He then turned it over to his counterpart at the U.S. Military Academy, Boo Corrigan.  He spoke about the gala and Ellis Island.  He spoke with emotion about how for most Ellis Island ties back to their roots and how it that plays with the theme of the anniversary of 9/11. Following Corrigan Rollie Stichweh, co-chair of the host committee, and USAA Senior Vice President for Military Affairs and Retired Navy Vice Admiral John Bird gave their sentiments about the selection of Metlife and what this game will mean to the Army and Navy communities.

The Army-Navy Game presented by USAA will take place on Saturday, December 11, 2021 at Metlife Stadium in East Rutherford, NJ.