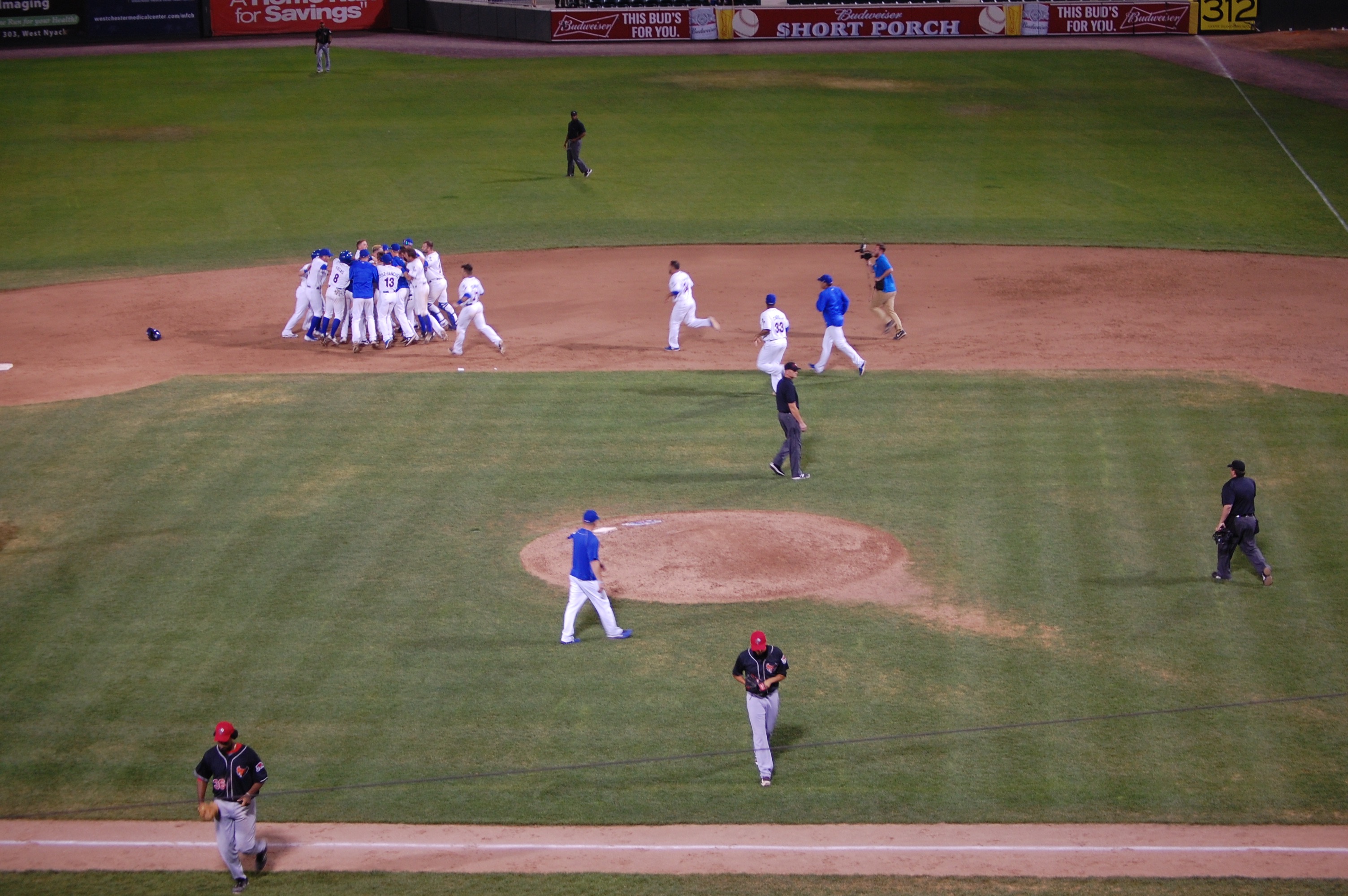 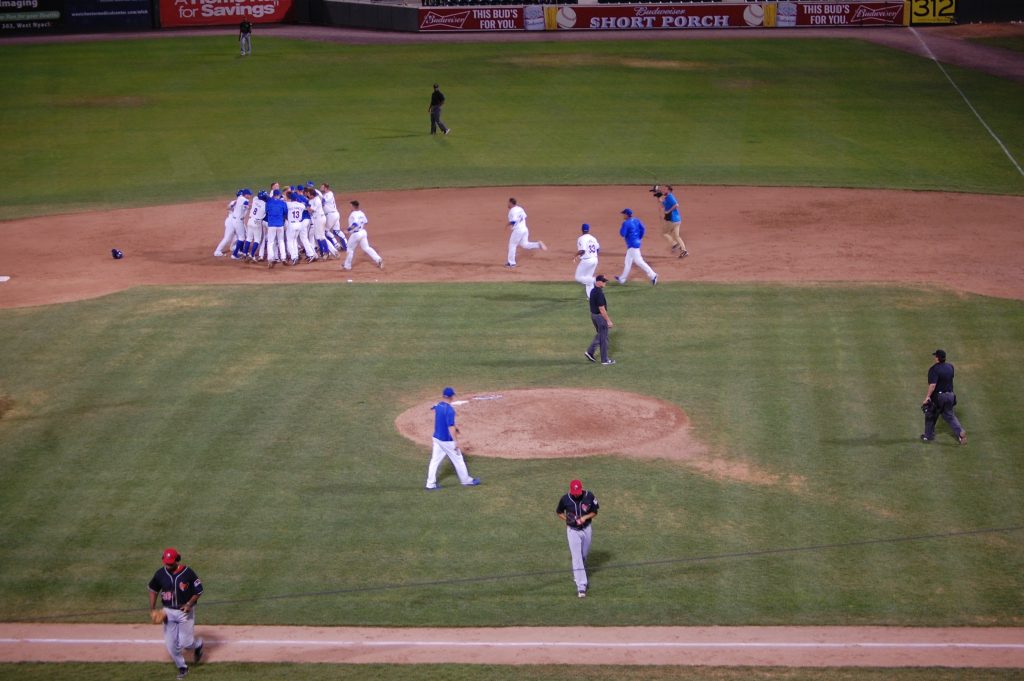 “We’re a little under the weather in here and four guys sick on the team but no excuses we need to bring out nine tonight and we’re putting nine position players out there with pitcher Jarret Martin an extra man coming off the bench,” Keefe said.

In game one of the series, Rockland fell behind early 1-0 but roared back behind home runs from Jared McDonald in the first inning and Mike Montville clubbing a two-run blast that just cleared the top of the right field wall. Alex DeBellis added an RBI single in the sixth extending the margin to 4-1.

New Jersey made it a one run game with one swing of the bat in the seventh as Adam Martin socked a two-run shot to right field. Boulders starter Markus Solbach aiming for his fifth victory of the season departed after seven innings surrendering three runs on seven hits while walking one and fanning four. Solbach gave way to Pat Butler who was unable to hold the lead. Cory Vaughn drove in his 2nd run of the game ripping a drive to left that tied the game up at 4-4.

D’Vontrey Richardson followed smacking a two-run triple to the right center gap. Martin knocked in his third run of the game with a flare single into right scoring Richardson. There was no quit in the Boulders as they drew three walks against Jackals reliever Robert Stock. The red-hot Mike Schwartz emptied the bases drilling a double into the left field corner knotting the contest at 7-7. Schwartz has produced 10 RBI’s in his last five games. Jared McDonald capped the furious comeback in the ninth delivering a walk-off bases loaded single off New Jersey reliever Justin Brantley to right field giving Rockland an 8-7 victory. Daniel Carela recovered from a rough outing on Saturday to register his first win of the season.

“Always a dogfight with New Jersey and going to be 10-0 games like a couple of weeks ago, 2-0 games and back and forth like tonight,” Keefe said.

“Having a day off yesterday and we’re banged up right now but we found a way to win which is huge,” McDonald said. “We love playing at home and New Jersey is tough to play and to get that first win in the series gives us some momentum.”

“I wanted to be aggressive in that situation and drive the pitch,” Mike Schwartz said. “They threw a couple of fastballs and left one out over the plate and I went with it and luckily it dropped in. From top to bottom this has been one of the best lineups I have been a part of in professional baseball.”

Game two of the series was no different with the Boulders in a 3-1 hole through five innings of play. In the sixth, Marcus Nidiffer led off reaching on an error. Swinging the bat extremely well at the plate, Pat McKenna roped a drive into the left center gap scoring Nidiffer. Newcomer Ed Charlton got into the act lacing a single into right bringing in McKenna tying the game up at 3-3.

The bullpen woes for Rockland continued after starter David Fischer exited after five innings. Daniel Carela came into pitch and immediately ran into trouble serving up an RBI double to Adam Martin. Carela plunked Johnny Bladel loading up the bases. The next batter Michael O”Neill walked forcing in the third run of the inning. Carela’s wildness persisted as he hit Rylan Sandoval plating Eddie Newton making it 7-3. Jamie Keefe called upon Donnie Joseph and with Art Charles at the plate Joseph uncorked a wild pitch with the bases loaded as Bladel trotted across home plate. Johnny Mitchell capped the scoring in the inning chopping a grounder through the hole into right extending the Jackals lead to 8-3.

Once again, the Boulders quickly flipped the switch in the eighth inning loading up the bases and with one Alex DeBellis belted an RBI single to center. The bases were still loaded when Ray Frias drew a walk off Jackals reliever John Sheehan bringing in Ed Charlton. Jared McDonald followed lashing a single to left scoring Mike Montville. Mike Schwartz continued his torrid stretch with a two-run bad hop single over third base cutting the deficit down to 9-8. Schwartz upped his totals to 12 runs driven in last six games.

Rockland had one last chance to tie the game up in the ninth with McKenna stroking his fourth hit of the game, a lead off double down the right field line. New Jersey closer Fernando Cruz buckled down and ended up striking out the side to close the game.

“We didn’t lie down but middle relief failed us again and we have some issues right now and have to figure it out,” Keefe said. “We need performances and numbers speak.”

New Jersey wasted no time getting on the board in the final game of the series scoring three times off Boulders started Bo Budkevics. It would get no better in the third as the Jackals sprayed the ball all over the field tacking on three additional runs. Budkevics was finished after four innings charged with nine runs on eights hits walking three and striking out four.

Marcus Nidiffer jump-started the offense in the fourth launching his fourth home run of the season. New Jersey responded in the bottom of the frame in big fashion as Rylan Sandoval swatted a three-run missile over the left field wall. The Boulders displayed tenacity in the following inning with the sizzling Mike Schwartz pelting a two-run into the right-center gap giving Schwartz 14 RBI’s in the last seven games.

Nidiffer went yard for a second, a two-run shot and 8th of the season trimming the lead to 9-5. Pat McKenna nine hits in his last three games, pelted his first home run in a Boulders uniform in the 8th making it 9-6 but that is as close Rockland would get with Art Charles crushing a moon shot over the right field wall for his Can-Am League leading 11th home run.

“They had runners on early and took care of business,” Keefe said. “We needed Bo to give us four or five innings the way the bullpen is and he is coming off a toe injury. He was able to throw 95 or 100 pitches but didn’t have any push off and everything was up in the zone. We lost this series, they outhit and outpitched us but at the end of the day we have to look at what happened.”

Rockland returns to Palisades Credit Union Park on Friday where they face off against the Cuban National Team in a three-game set.