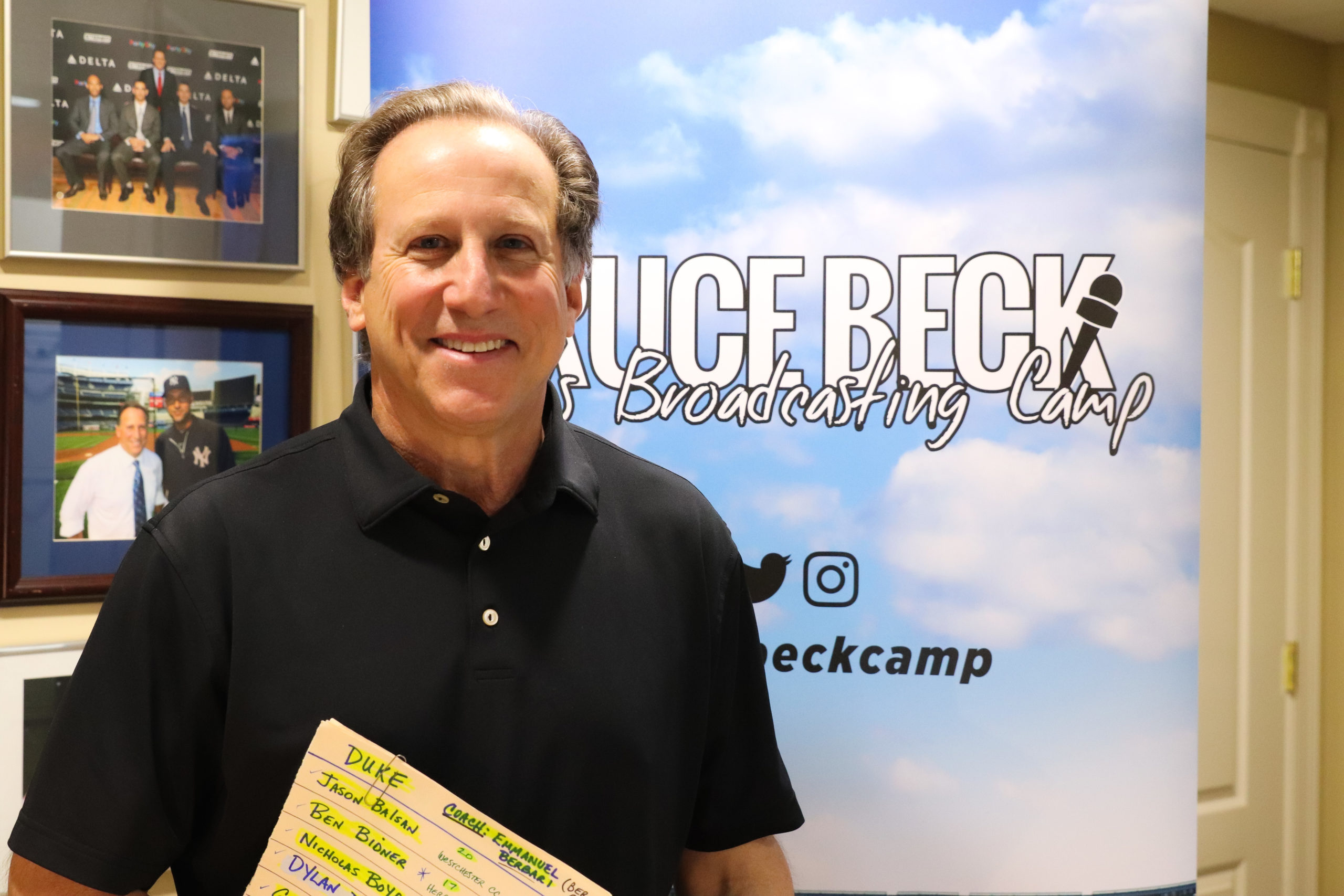 “I love mentoring kids. I have been fortunate to have learned from Marty Glickman, Marv Albert, Jim Gordon and Sam Rosen. Now I can help develop the next generation of Sports Broadcasters.”

For the past 23 years, Bruce Beck has been the Lead Sports Anchor for NBC4 New York. In his career, Beck has received eight New York Sports Emmy Awards and covered a multitude of events including five Super Bowls and eight Olympic Games.

When Eagle left as a lead instructor in 2017, Beck grabbed the reigns.

The Bruce Beck Sports Broadcasting Camp was set to take place at Iona College in New Rochelle, New York this year. Then, the global health crisis made it impossible for campers and instructors to get together in-person.

Unfortunately for the campers who attend this year, there will be no practicing their home run calls at a live New York Yankees baseball game. There won’t be an opportunity to meet the New York Yankees general manager, either. However, Bruce and his team have made sure 2020’s camp has maintained the same quality of instruction that keeps young broadcasters coming back year after year.

The biggest adjustment that Bruce and his team made was to hold all camp instruction virtually.

“It was a smart move, really the only move to make, because there was no venue that would take us,” Beck described.

The camp was five days where the campers attended two 90-minute sessions each day. As has been the case in every year, the overall camp is split into two groups: the veteran camp and the rookie camp. From there, the camps were split into teams.

Once camp instructors had finished teaching the entire group, the campers move on to the next part, called their “breakout sessions.” Beck labeled these breakout sessions as “fantastic,” because they allow them to specialize the camp.

In addition to Quick and DeFord, Beck had seven interns facilitate individualized instruction. The interns came from esteemed schools such as McGill University, Quinnipiac University, Fordham University, and the University of Notre Dame.

“I know it’s virtual, but we put a lot of effort into conceptualizing the program. In my 18 years of doing a broadcasting camp, I think it’s the best curriculum we’ve ever established, the most interactive by far,” Beck said. “It takes some time to figure out what the campers want, but what they want is to be involved, they want interactive programs, they want to do homework, they want to do research—they want to talk and we’re giving them that opportunity, we really are.”

Braun attended the camp in the past, and Beck only had positive things to say: “He has vicarious thrill when he announces on the big stage.”

For these campers, Braun is living proof that if they work hard enough, they too can achieve success in the sports broadcasting industry.

Emmanuel Berbari was one of the seven interns who assisted Beck this year. Next year will be his senior year at Fordham University, where he is the lead play-by-play broadcaster for Fordham Football and Men’s Basketball. Berbari won the Marty Glickman award this year for the second consecutive year.

It just so happens that Marty Glickman, the radio voice of the New York Knicks and Giants during the 1960s, was one of Beck’s idols growing up. For Berbari, it’s even more special.

“Just hearing about some of Bruce’s inspirations, like Marty Glickman has been inspirational for me and it gives extra significance [for me to win] an award like that, because Marty means so much around Fordham,” Berbari said. “He was a broadcast coach there in the late 1990s and has mentored many broadcasters.”

When it comes to his role in the camp, Berbari described why he thinks the Sports Broadcasting Camp has hit the right notes this year.

Berbari made it clear that going virtual has not stopped Beck and his team from offering the campers quality insights into the sports broadcasting profession.

Gabriel Gutierrez told me about a time two years ago when Bruce Beck visited All Hallows High School in the South Bronx, New York. Gutierrez says he got up in front of the class to give a 45-second oral presentation and that impressed Beck, who then approached him about attending his broadcasting camp later that summer.

Gutierrez still remembers the thoughts that ran through his head after he went home that day.

“When I eventually learned what the camp was about and went home that day, I was blown away. Having an opportunity like that doesn’t come across every day.”

Since that moment, Gutierrez has graduated from All Hallows High School and plans to attend college at SUNY Oneonta in the fall.

For Gutierrez, this year’s camp has a different feel, but he was still able to take away an important lesson.

“Perseverance is key. You continuously have to make sure that you don’t stop, even if you stutter or if you say the wrong name. Just correct yourself and continue on,” Gutierrez said. “Mike Quick always says ‘just keep going, keep pushing through because if you make a big deal out of it, it will become a big deal.’ Out of everything that’s my favorite piece of advice.”

Because this camp was held virtually, Beck accepted one camper from China and three from Texas, Virginia, and Maryland.

Hayley Galindo of San Antonio, Texas attended her first camp this year. She expressed her gratitude to Bruce Beck and his team for holding camp this year.

“Bruce and his team [are] all really humble people. They’re incredibly prepared. Despite the current outbreak with COVID-19 they still managed to keep the show on the road. That really shows their dedication to make a difference in people’s lives.”

Galindo described what she has learned from Beck during the “short days” she spent at camp.

“He’s brought out a version of myself that I never even knew was there. Not only have I learned so much about broadcasting, but also just about myself,” Galindo said. “Bruce is such an encouraging and inspirational man. What he’s doing is life changing. It really is.”

Teaching the Next Generation

I remember when I attended the “Bruce Beck and Ian Eagle Sports Broadcasting Camp” six years ago.

On the final day of camp that year, Bruce, Ian, and instructor Dave Popkin gave me the opportunity to call one half-inning of a Somerset Patriots’ minor-league baseball inside the broadcasting booth. I grew up imitating the radio voice of the New York Yankees, John Sterling, and always wanted to call a game for real. So, ending the camp on this note was a dream come true. I told my parents afterwards it was one of the best moments of my life.

“It’s all about giving back and developing young people and supporting them as they pursue their dreams.”