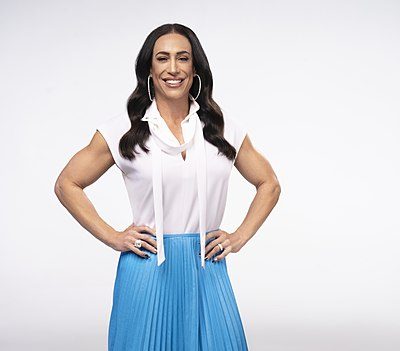 Dany Garcia is a powerful force to behold.

The CEO, chairwoman and founder of The Garcia Companies and TGC Management made history in 2020 as the first woman to own a professional sports league with the XFL. On Wednesday, Garcia talked to ESPN’s Sage Steele during espnW’s Women + Sports Virtual Summit about her journey growing up in New Jersey as a child of Cuban immigrants to becoming a business leader.

During Steele and Garcia’s conversation, Garcia stated that one has to acknowledge her past and her upbringing in order to understand why she’s currently one of the leading figures in sports and entertainment.

In doing what she calls “service through capitalism” through her many successful business endeavors, Garcia teamed up with business partner and ex-husband Dwayne “The Rock” Johnson to acquire the XFL this year. The professional football league entered Chapter 11 bankruptcy in April. Garcia told Steele that she has a “passion for creating,” and that she views the XFL as “another major expression” of creativity in which she’s not only connecting with the fans, but also with the XFL athletes and business partners.

“I have a passion for working. My creation, enterprises and films, they connect with people. And that’s so important to me. That is so much fun,” said Dany Garcia.

She also mentioned not having any mentors to guide her along her career path and, despite that, built The Garcia Companies and Seven Bucks Productions around The Rock while breaking barriers as a Latina thought leader and business vanguard. “It was really a belief that I had,” Dany Garcia began.” “That I could build a corporate structure around an IP that happened to be a person. A very, very, very special person. And that’s Dwayne Johnson.”

“I had been working closely with him and he asked me to take the lead [in managing Johnson’s career]…that was in 2008, I began the process of looking at him as not just an actor. This is an incredible individual with a high EQ, high IQ, that has such an incredible reach that want to express in so many different ways. And I started to build that around that. So it was really in this idea and concept and this belief that you can build enterprise around an individual, very special individual.”