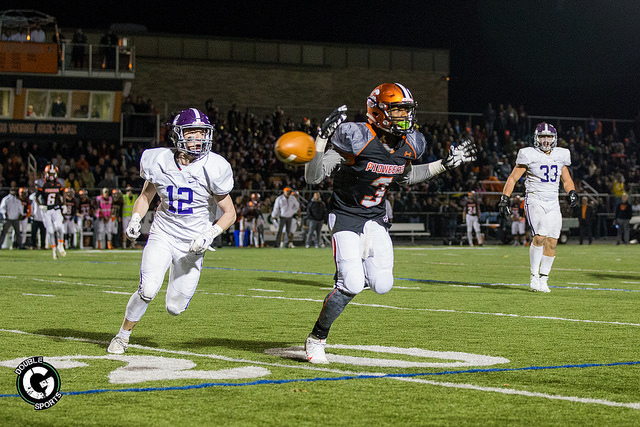 Entering the NJSIAA Central Jersey, Group 3 semifinals, the Somerville Pioneers sported a perfect 10-0 record while averaging over 50 points per game. The Rumson-Fair Haven Bulldogs travelled north on the Garden State Parkway knowing they could not get in a shoot-out with the Pioneers.

The Bulldogs had a size advantage and if they were to leave Somerville with a victory, they would have to slow the Pioneers speed and make this a game on strength.

Somerville got out to a quick start and had the crowd at Brooks Field at Gus Vanderbeek Athletic Complex feeling a sense of normalcy. The Pioneers controlled the first quarter. On their second drive of the game, Somerville quarterback Nick Couzzi lofted a beautiful pass that was caught in the corner of the end zone by Nasyr Petties-Jackson for a 14-yard score. The extra point clanked off the right post but Somerville led 6-0 early on.

After forcing a Rumson punt, the Pioneers took over. Facing a fourth-and-1 on their own 30-yard line, Somerville head coach Jeff Vanderbeek kept his offense on the field. Petties-Jackson lined up in the Wildcat formation and took off down the field, blowing by everyone for a 70-yard touchdown. Somerville led 13-0 after one quarter.

The game and momentum took a big turn after that. Rumson would score twice in the second quarter and took a 14-13 lead into the locker room at halftime.

The Bulldogs used a power running game that would eat up the clock and keep the Somerville offense off the field. Matt Veccharelli finished with 30 carries for 120 yards while Mike O’Connor added 81 yards of his own. O’Connor also completed six of seven pass attempts for 57 yards and a touchdown.

Rumen’s size advantage was evident on both sides of the ball. The Bulldogs offensive line paved the way for the rushing attack to control the game. On defense, the Bulldogs seemed to have pressure on Couzzi on almost every snap.

Couzzi and the Somerville offense was unable to get in a rhythm. He was unable to get the ball to Petties-Jackson in any sort of consistency. Rumson kept Somerville from completing any big plays. So many times, the Bulldogs forced Couzzi out of the pocket to his right. Unfortunately for him, his star receiver was lined up on the opposite side of the field most of the time.

Rumson added a 2-yard touchdown run by Veccharrelli late in the third quarter to extend their lead to 21-13.

Somerville’s defense held the Bulldogs and have themselves one last chance. Couzzi completed a few short passes and advanced on a nice scramble on a broken play. A defensive pass interference call pushed the Pioneers into Rumson territory and continued the drive.

Rumson’s Pat Russo intercepted a Couzzi pass in the end zone on Somerville’s final play and the Bulldogs ran the clock out from there for the victory.