Two days before Rutgers football kicks off their season on Saturday versus Norfolk State at noon at High Point Solutions Stadium, five current Scarlet Knights were arrested and charged with a variety of crimes as reported by NJ.com.

Stephenson’s brother and former defensive lineman for Rutgers, Daryl Stephenson, remain’s at large police said according to the same report.

A newer article regarding the situations on NJ.com reported former player Tejay Johnson was also in the mix.

“Former player Tejay Johnson was charged with robbery, criminal restraint, theft and possession of a weapon for an unlawful purpose stemming from a home invasion in New Brunswick on April 26, 2015.

Johnson and current cornerback Andre Boggs were charged with robbery, burglary while armed and conspiracy to commit an armed robbery for allegedly forcing their way into a home and, armed with a bat and a knife, robbed a student of approximately $900 and an undisclosed amount of marijuana.”

According to NJ.com, “They were arrested today on charges of robbery, burglary while armed, and conspiracy to commit an armed robbery.” 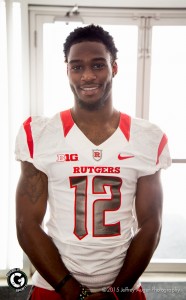 Johnson, cornerback Ruhann Peele, cornerback Nadir Barnwell, fullback Razohnn Gross, safety Delon Stephenson and former defensive tackle Daryl Stephenson were charged with aggravated assault, riot and conspiracy to commit a riot as the result of an attack that left a 19-year-old male student suffered a broken jaw during an unprovoked attack on April 25, 2015.

In a third home invasion, Johnson and Boggs were charged with robbery, conspiracy to commit armed robbery, and attempted burglary while armed for trying to force their way into another student’s dorm room at Livingston College in Piscataway on May 5, 2015.”

In addition, according to NJ.com, “The same charges also were filed against Mastriana, Jianan Chen, 19, of New Brunswick, and Kaylanna Ricks, 20, of Perth Amboy. The investigation showed that Mastriana and Chen planned the robbery, while Ricks drove Johnson and Boggs in a getaway vehicle.”

Boggs at cornerback and Delon Stephenson at free safety were set to start Saturday’s opener against the Spartans. Peele a converted cornerback, was originally suspended for the first half due to missing a curfew.

Anthony Cioffi will likely step in and start at free safety while redshirt freshman Isaiah Wharton or true freshman Jarius Adams will start at cornerback opposite of freshman Blessuan Austin. Either way you look at it, the secondary is young and inexperienced.

Barnwell was already in jeopardy for missing the season due to academic reasons, and reasons why head coach Kyle Flood may or may not be suspended due to an investigation going on to determine if he did in fact contact a professor of Barnwell’s about his status and grades.

In a statement from Athletic Director Julie Herman, the players will be suspended from the team.

“The students involved are currently suspended from our program,” Hermann said. “We continue to monitor the situation. We will have no further comment as this is a pending legal matter.”

Leadership has stayed behind Flood as he signed an extension last season. However, with all the turmoil, is it time for a change? Whatever it is, Rutgers needs some good news, and a win on Saturday could help. However, even if Norfolk State is a notch down in competition, the task won’t be easy with player suspensions, injuries, and distractions.

I don’t get the Flood should be fired or Flood should resign talk. Yes, he may or may not be in trouble for the on-going investigation regarding Barnwell, but he wasn’t around the kids when they did these acts. They weren’t under his control at the time. However, if some of you feel he should be let go, a possible replacement could be an old face. We’ll see what happens, but maybe, just maybe, having a “player’s coach” isn’t what Rutgers needs. Who knows?

You can find the full press release from the Middlesex County Prosecutor’s Office by clicking here.