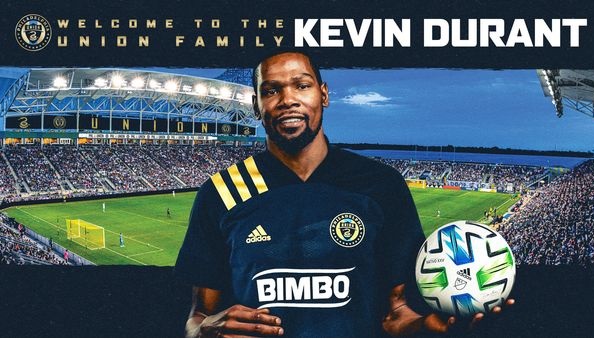 On Monday, the Philadelphia Union announced that Kevin Durant of the Brooklyn Nets joined the Union ownership group as an investor and community partner. Durant has purchased a five-percent ownership stake in the club. There is an option to purchase an additional five percent in the near future.

Part of the ownership will feature a partnership with Durant and sports business executive Rich Kleiman. The partnership with Kleiman’s group, Thirty Five Ventures, will focus on growing the Union’s footprint in the sports world. The group will work closely with the Union to expand its marketing opportunities, as well as expand the team’s community outreach in conjunction with the Kevin Durant Charity Foundation (KDCF).

On June 4, there was a report that Durant was joining the Union ownership group. This news came following reports that, Durant was seen in Chester, Pennsylvania with the Philadelphia Union ownership in December 2019. This sparked initial speculation.

“I’m excited to partner with the Philadelphia Union for years to come. My team and I connected instantly with the Union coaching staff and leadership, as well as the team’s story. . . I’m looking forward to working in the Chester and Philadelphia communities and making an impact in the same way that the KDCF has been able to in my hometown of Prince George’s County.”