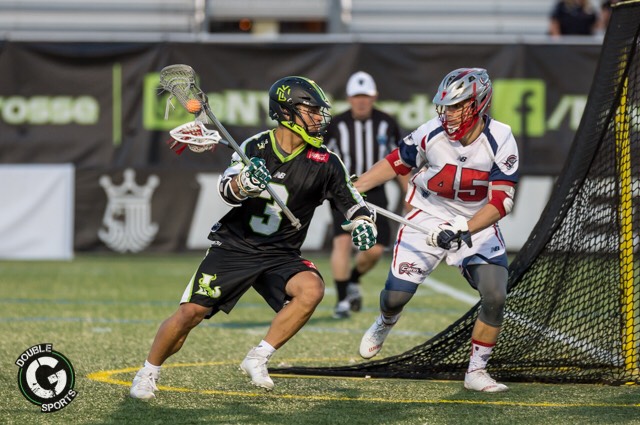 Lizards climb back to .500 after sloppy win

There are sometimes where getting a win is way more important than how you played.  Thursday night at Hofstra was one of those games for the New York Lizards.

With four of their top players missing due to the World Championships in Israel, the Lizards were able to overcome some sloppy play and penalties to defeat the Boston Cannons, 14-13.

The Lizards were led by stud Joe Walters, who was able to pot five goals, including the game winner.  Being that it was such a sloppy game, even the game winning goal came under much scrutiny.  Walters scored the final goal of the game with just over one minute to go and zero on the shot clock.  The Cannons challenged the play, stating that the ball was still in Walter’s stick when the buzzer went off.  After several minutes of deliberation, the goal stood.

The Cannons came back furiously every time the Lizards took the lead, but they were unable to tie the score up with just under a minute left.  The Lizards came away with both a moral and actual victory, and they’ll gladly put that one in the bank after what was realistically a poor performance for both teams.  The two standouts for the game were the aforementioned Walters and former Lizard James Pannell, brother of Lizards star Rob, who lit the Lizards up for six goals.

The Lizards have two games left, one in Dallas against the Rattlers, and a season finale at home against the Chesapeake Bayhawks.  It’s going to be a tough schedule, as the Rattlers and Bayhawks are numbers one and two in the standings.  If the Lizards are going to make the playoffs, they absolutely need to win both games.  It’ll be a hard stretch, but I’m confident they’ll get it done.