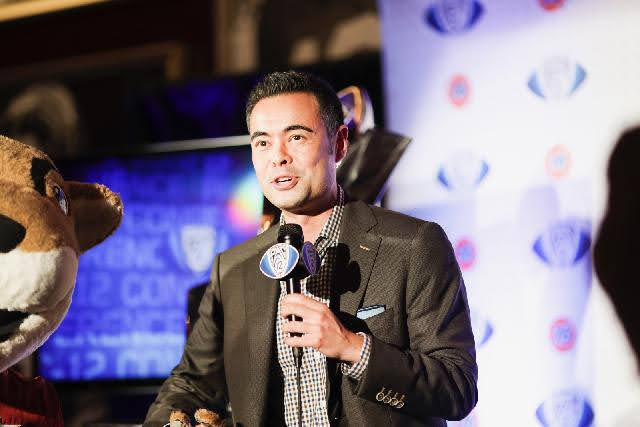 Born in the Bronx, Mike Yam and his family packed up and began planting roots in a new state. His family moved to Dumont, New Jersey, and after finishing eighth grade at St. Mary’s Catholic School, Yam moved to Oradell where he attended Bergen Catholic High School. It was at a school dinner where Father White mentioned to Yam about how impressed he was with voice and recommended Yam think about doing radio.

That conversation was all it took for Yam to ultimately wind up as a sports anchor for the NFL Network.

Once Yam graduated from Bergen Catholic, the next stop was attending Fordham University. At first contemplating a career as a doctor or pediatrician, Yam had a change of heart during his freshman year due to his love of sports.

“When I was at Fordham, I remember one time Keith Olbermann came to speak to us,” Mike Yam described. “Keith asked us who wants to be on the air and pretty much everyone in the room raised their hands, and he had statistics as to why we weren’t going to make it.”

“I’ll never forget the walk from Keating Hall where the meeting was to south where my freshman dorm was. I said to myself maybe this isn’t going to be for me and you have some doubts… And then all of a sudden you start getting some opportunities.”

Majoring in Communications, Yam got the opportunity to work on the WFUV Sports 90.7 FM sports talk show One on One as well as be a sports manager and president of the Fordham Club.

“You realize the amount of talented people that came before you,” Mike Yam explained. “Chris Carrino, Mike Breen, Tony Reali, Spero Dedes, Andrew Bogusch and Drew Casey. I remember the first radio meeting that I attended my freshman year and Tony comes up and says ‘Hey, I’m Tony Reali and I’m the sports manager and just wanted to say hello and welcome you to the team.'”

After graduating from Fordham University in 2003, Yam’s first job was with Sirius XM, where he worked for five years hosting a variety of shows from The Mike and Murray Show, Full Court Press and The Phil Jackson Show. In addition to Sirius XM, Yam also worked for NBA-TV.

“I would do updates that just morphed into getting to host shows,” Mike Yam stated. “At one point I was doing shows six days a week. I was doing an NBA show for Sirius XM at the time the Olympics were in Turin and this is before the NBA-TV was in Secaucus.”

This work set the foundation for a future role with ESPN. Leading up to earning an anchor position, Yam went through extensive interviews and auditions that lasted for eight hours.

“You have just have to put you head down and grind it out,” Mike Yam remarked. “I say working at ESPN was like going to public school. You got these huge class sizes with so many people and you got to be a little different to differentiate yourself.”

Yam did just that and landed the job. However, the celebration would be diminished with the sad news of Yam’s grandfather being diagnosed with Alzheimer’s.

“When I got the ESPN job I thought this is unbelievable, like I couldn’t wait to pinch myself,” said Mike Yam. “I remember going walking into my grandparents’ apartment and I was literally screaming. When I was working at NBA-TV, some of those shows were airing on the YES Network and I would record them and take my grandfather back home with me and throw the DVD on so he could watch.”

“I thought it was the coolest thing ever to happen that I was a sportscaster and I was talking about sports and wanted to share that with him…My grandfather was my best friend growing up, he is probably the biggest reason why I got into sports because he was a die-hard sports fan.”

“It’s heartbreaking to see someone that you love and care about and shared so many great moments over the course of your life to now to have that blank look and not recognize you… It’s soul-crushing. To be involved with those services was really meaningful.”

During his time at ESPN, Mike Yam hosted SportsCenter, College Football and Basketball Live and NBA Fastbreak. This represented a major change for Yam going from radio to TV.  “They are totally different mediums to be honest,” Mike Yam mentioned. “Especially from the host perspective, the radio stuff is a game changer on the team side.”

And another big part of “looking good” on camera is the behind the scenes production staff.

A great producer is a difference-maker on the set and there is no doubt a great director can change the game for the people that are on the set. Producers are still the leaders and directors are the leaders in the control room.”

After his stint with ESPN, Yam joined the PAC-12 Network in 2012 when it launched. There, he worked as a studio host on the pre-game, halftime and post-game shows for football and men’s basketball. Yam also anchored the network’s flagship show Sports Report.

“I was looking for a challenge and fortunate enough to get the job at the PAC-12 Network,” Mike Yam described. “From day one when you are invested in the project, wanting to do well and see it thrive.” I couldn’t be more proud of the work.”

Sadly, Yam’s run with the PAC-12 Network came to end after eight years in August, because of coronavirus-related job cuts.

But his resilience took center stage shortly after… A month later, Yam joined the NFL Network thanks to his circle of friends, colleagues, and relationships formed at Fordham University. These people includes WFUV Sports producer Bob Aherns who was his first mentor, and Mike Breen, who did an intro to his tape and demo reel. Spero Dedes, Bruce Beck, and Bob Papa.

“When my contract wasn’t renewed at the Pac-12 Network two months ago, I had this whiteboard in my bedroom and started writing names of networks and people that I might know. I just started going down the line and making calls,” said Mike Yam. “It was incredible to see the amount of people that were willing to help out, make an introduction for me and put in a good word for me at the NFL Network.”

Despite this career shift, Mike Yam is still able to maximize his opportunities with hosting radio shows on Sirius XM and PAC-12 Radio.

Yam understands the profound impact of diversity and representation in media. As an Asian-American, he’s breaking barriers to this day.

“I’m more aware in a lot of places there is not a huge amount of diversity, but one of the cool things is the amount of diversity on the various sets and hearing different voices at The NFL Network, said Mike Yam. “I remember seeing Michael Kim on ESPN News and he would become a really good mentor to me.”

Mike Yam himself hadn’t realized the impact of representation and diversity as a child, so it’s important for him to be that source of inspiration for the next generation. Plus, he hopes to remind them that their dream jobs will take time and patience.

“Young broadcasters are in a way better situation than I ever was…Get your own equipment and get started….Networking and relationships are everything.”

“I still remember playing baseball in town [Oradell] and had fun times doing that,” Mike Yam described. “Right down the street from Bergen Catholic were the basketball courts, a group of us would go down there to Memorial Field and shoot hoops.”

Where Yam draws the most inspiration from is his mother and father.

“My Dad came here when he was 16 and didn’t know much English. Over the years I have seen him work relentlessly and don’t think he will ever retire,” said Mike Yam. “He gets up at 4:30 every single morning and goes to the hospital in Manhattan.” Occasionally he goes back and forth between Baltimore, because my Mom is President Notre Dame of Maryland University.”

“Our family has worked hard and they were able to move up the ladder. I’m lucky to be in that spot and learn from them.”

For more features like this, find them on In The Zone.