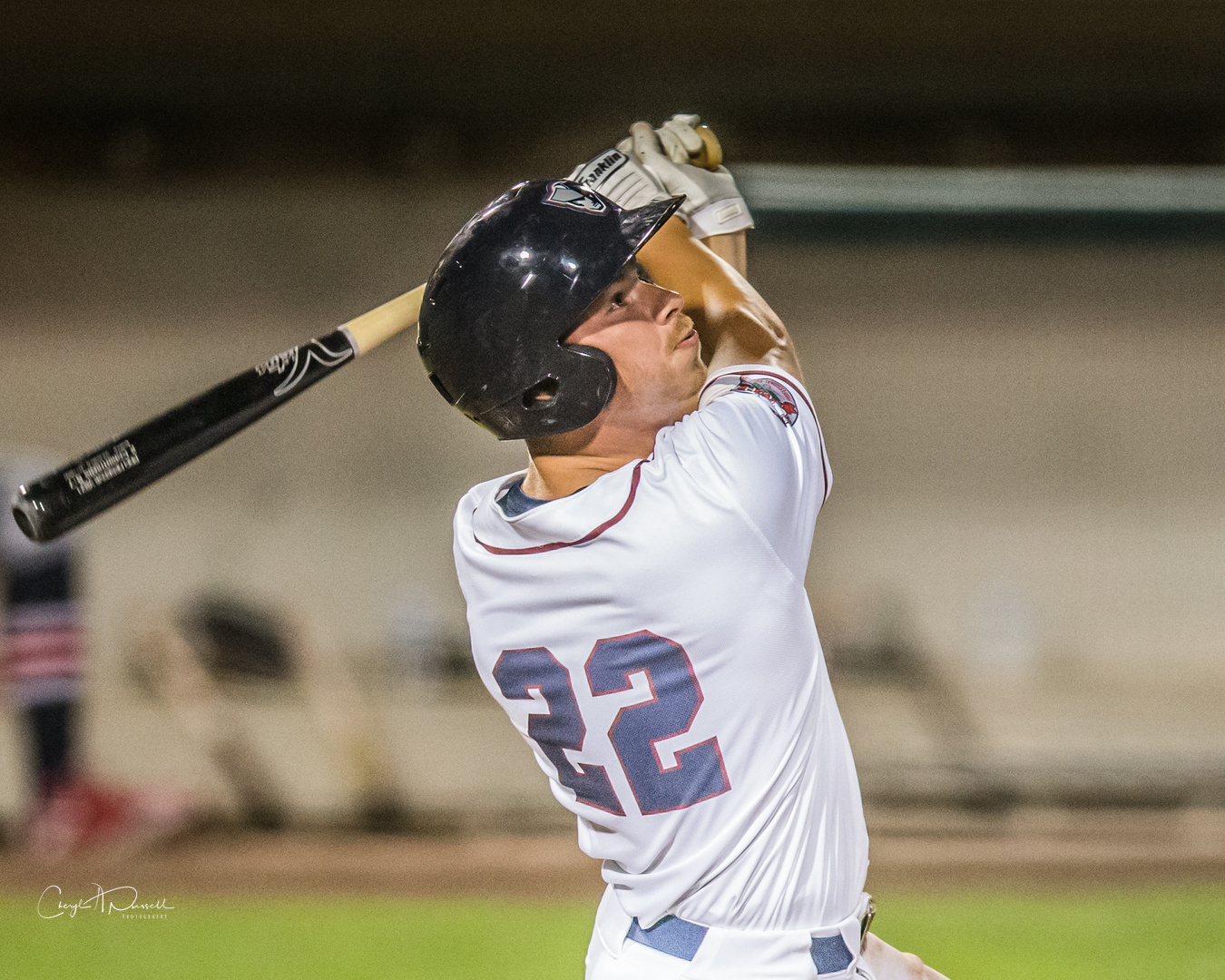 Last November I had the honor & privilege of sharing Dan Valerio’s story. Valerio, a Monmouth Regional High School graduate, touched me and others, as he spoke about moving from college-to-college while battling anxiety and depression. On top of that, Valerio’s father suffered a debilitating stroke. All during this, Valerio mustered the courage to return to college and the sport of baseball.

He flourished at Southeastern University in Lakeland, Florida by breaking a number of school records. He went on to play in the Cape Cod League and put up impressive numbers there, too.

Despite going undrafted for Major League Baseball, Valerio continued to play in the United Shores League until he decided to return home to New Jersey. While at home, he discovered a higher purpose outside of athletics by getting involved in a youth group at Well Spring Church in Toms River. There, Valerio spoke to students at his alma mater, all while completing his sports management degree online.

We all know 2020 has brought unexpected turns, and Dan Valerio experienced that first hand. He signed with the Windy City Thunderbolts in the Frontier earlier in the year. Valerio was looking forward to playing for a new team and league, but due to the COVID-19 pandemic, the season was scrapped at the end of June.

Before first pitch on Friday August 14, I had the opportunity to catch up with him and ask about what it’s like playing for the Patriots this summer.

Dan Valerio: It’s been incredible, I didn’t know if we were going to play baseball this season. Jon Hunton [of the Somerset Patriots] reached out to me. It’s been an amazing experience with first class players and organization. There is no travel, we’re playing the small ball club and the talent over there is some of the best competition I have faced, especially on the mound with Double- and Triple-A guys. It’s allowed me to really transition from an amateur player to a professional.

DGS: This is a short burst of games you are playing for a couple of weeks. Can you describe what it’s been like adjusting to that schedule and only playing in front of a maximum of 500 fans with safety protocols in place?

Dan Valerio: We only play on Friday and Saturday nights, and have a few practices during the week. It’s challenging because we’re not on the field every day, but the mindset is to just go out and compete. You have a limited opportunity but got to make the most out of it. You get three at-bats a game, I take it and try to help my ball club win.

The energy of the fans even though it’s capped at 500 has been great. The fans show up early and are cheering us on. Even the Blasters have created a fan base and have some gear flying around and feels like a baseball atmosphere. We’re getting tested, have to wear a mask and the organization has been doing a great job of keeping everyone safe.

From a baseball standpoint, the mentality is something I have been working with and through my career has been a struggle. I have always relied on the [physical aspect] whether it be hitting or working or playing good defense. At the age of 23 I have a better grasp of my mentality, the ability to handle failure and not to react in a bad way.

DGS: What was the experience like, stepping onto to the field at TD Bank Ballpark and meeting manager Brett Jodie and your teammates?

Dan Valerio: The walk from the locker room and coming out to the field…I felt like a kid in Disneyland. I never met Brett before now, but he is managing like it was a regular season. He is developing you, talking to each individual player. I haven’t really had any pro experience before, but he is accelerating my growth in the way he makes little adjustments. He is probably one of the best managers I have ever played for. He allows us to fail and keep working at it and getting better.

I talked to some of the guys on the team, and they have been at some of the highest levels [of the game], but this is one of the most beautiful ballparks they have played at. I have been to a few College World Series’ and this place surpasses it.

My teammates and I bonded right away from the workouts. Scott Kelly, in particular, has been here a long time and to see his work ethic is inspiring. I thought I worked hard until I met Scotty and it doesn’t matter if you go 4-for-4, he still shows up and puts in the same work.

Joey Rose lives close to my town. You also have older guys on the team, but no one treats you differently because of the experience you have. It’s a small world… In high school I faced Mark Leiter Jr. and now he is on my team.

DGS: You are listed as a utility player, can you talk about some of the positions you have played? Tell me about your first plate appearance and game you played with the Patriots.

Dan Valerio: Brett had me at third and first base. With my speed I could play any position but the fit at first base has been good. I’m just learning another position that I can get good at. Instead of nerves it’s something more of gratitude and I’m grateful to be here.

Early in my career I always put pressure on myself to perform, but now I fall in love with the process like the weightlifting and preparation work. It does pay off because you can’t be thinking when you are facing a pitch at 95MPH. I have just been playing the game, stealing some bases, taking my walks and trying to score the runner.

DGS: Any games that stand out? The celebrations are much different with the COVID-19 pandemic.

Dan Valerio: We had a walk-off win in the first week. There was a cool moment at the plate when the winning run scored and we touched feet. It’s different because there are no high fives and piles.

DGS: How special is this for your family to see you playing so close to home?

Dan Valerio: It’s awesome. They have been able to come a few games. My dad has been able to come. My mom has been through some stress, seeing her husband be the leader of the family going down like he did, but she stepped up and so did my brother and I.

We have become tighter as a family.

She comes to the game and her support has been awesome. My brother is playing at Cabrini University, he is in the sports medicine world and navigating his way through life.

For the past two years it’s been difficult and a huge change in the family setting and emotions. There is a different kind of joy. Like I said in the last article, my dad did so much to put me in front of people, [including the] best trainers and coaches. That allowed me to not only develop as a player but as a man.

He always provided for the family but just showed me what a great father is like and even through some adversity and something he can’t control with the stroke, he still is a great role model. He still has that smile on his face, and comes to the ballpark… sitting up there in the handicapped section. He gives me the fist. He always showed love. I’m grateful for him.

We’re just taking it one day at a time and hoping for a miracle that he can walk one day. But he is still breathing and the fact I can go home and have some dialogue with him and talk about the game [is incredible].

DGS: There are plenty of kids that attend the games, to see a local guy play for the minor league baseball team is very exciting. Can you describe having that type of impact?

Dan Valerio: I have transitioned to a lot more coaching. I’ve been coaching youth teams and kids 11 to 15 years old and sharing my experiences with them. I wish as a kid I had a coach that was willing to walk alongside with me and be like ‘this is how you handle yourself like a professional and deal with failure at a younger age.’ That really is my message to kids.

For the seniors and college players that started the season and had it end, I don’t know that feeling. I can’t put myself in their shoes, but my advice to them is even with adversity you have to keep going and doing you can to keep control and not worry about the stuff you can’t control.

DGS: 2020 has been a very difficult not only for high school/college/professional athletes but people in general. What is your message to everyone out there?

Dan Valerio: People are handling it differently but for me, I’m choosing to have faith over fear. Love people better than I did yesterday.

It’s been humbling some of the stuff I have been through. The Lord has allowed me to keep moving forward. Even from the coaching side there are lessons and adversity I have experienced and I can share with others.