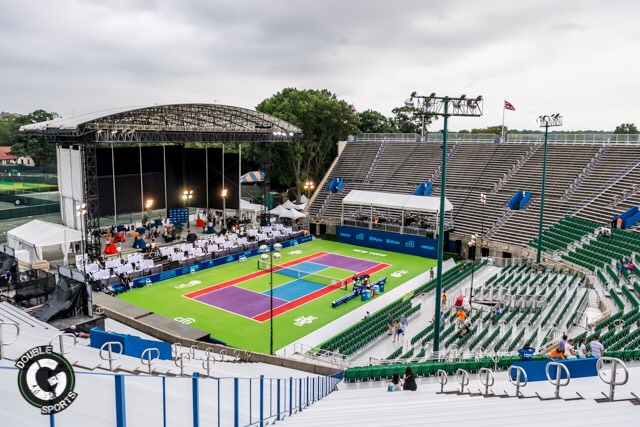 World Team Tennis (WTT) kicked off Sunday and New York Empire began the season with a close win over Philadelphia Freedom.  For those unaware, WTT is an exhibition league of six teams that composes of five events: men’s singles, women’s singles, men’s doubles, women’s doubles, and mixed doubles. In each event the player or team to get to five games win the set. The team with the most games, after the five events. There are also new features such as timeouts, a 25 second shot clock for serving, the playing of lets and the ability for a coach to make a player substitution.  NY Empire is coached by Hall of Famer Gigi Fernandez

NY Empire is headed by American John Isner and WTA player Kirsten Flipkens. Those two players would be crucial to their team’s victory.

Empire and Freedom split the ladies’ doubles and ladies’ singles. Sloane Stephens and Taylor Townsend got a break against Kirsten Flipkens and Maria Sanchez at 3-3 and then they served it out. Flipkens then return the favor against Stephens using her serve and craftiness to win a dominant set against the young American.

Proving her endurance, Kirsten played once again in the mixed doubles with John Isner to take on Taylor Townsend and French native Fabrice Martin. Early in the set both teams showed their ability to hold serve but eventually Empire was the first to blink, with Flipkens getting broken. Freedom was then able to win the set with their serve.

The next event was the men’s doubles, pitting John Isner and Neal Skupski against Donald Young and Fabrice Martin.  Early in the set Empire faced four break points but John, doing what he does best, served his way out of trouble. Freedom did the same when they faced three break points. Eventually aggressive retuning work for both teams as they traded breaks. The set would go down to a nine-point tiebreaker, where Freedom was able to take control and when the set.

The final event had Americans John Isner and Donald Young face off for the deciding set. If John could win the set by more than two games, he would be able to get the win for Empire. There wasn’t much suspense because at 1-2, John got the break. After that, John used that great serve to bring home the win for NY Empire.  Empire defeated Freedom 20 to 18.

After the match, John said to the crowd, “Tonight was lots of fun, the crowd was great,” I’m just glad I was able to help the team win.”