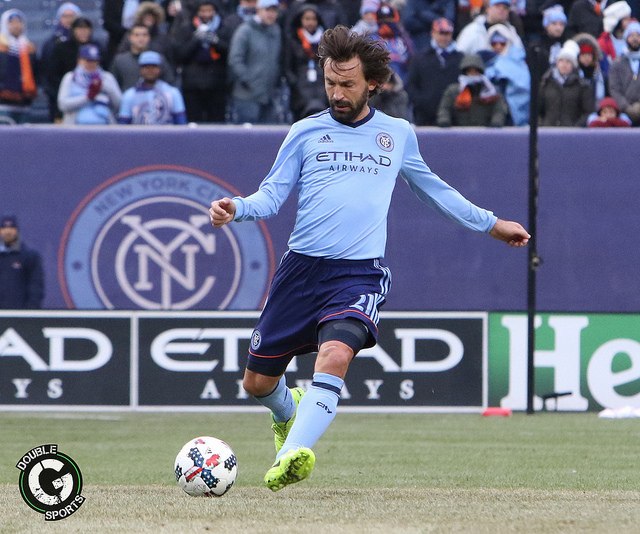 NEW YORK, NY — Andrea Pirlo is a 37-year old midfielder that needs to be moved by NYCFC.

Before I start an outrage, let me clarify what exactly I am saying.

Head coach Patrick Vieira needs to move Andrea Pirlo out of the CDM role and put him higher up into the midfield as Pirlo has proven to be a liability at CDM.

Throughout his career at AC Milan and Juventus, Andrea Pirlo has never been known for his defensive prowess. What defines the World Cup-winning Italian is that he orchestrates play beautifully across the field, finding attackers with a beautiful long ball or a backline splitting pass. In the MLS (and a small field at Yankee Stadium,) Pirlo has simply not been able to be himself in the MLS.

When initially coming over from Juventus on a free transfer in the summer of 2015, Pirlo was critical of the playstyle in the MLS, claiming that it is “more physicality than playing football.” It was evident during his first half season with NYCFC that Pirlo was struggling with the style as at 35-years old, he did not want to have a physical grudge match every time he came onto the field.

In an interview with Reuters, Pirlo stated “It’s a very hard league to play in. It’s very physical; there’s a lot of running. So there is a lot of physical work and to me, in my mind, too little play.”

Despite Pirlo later saying in an interview with Sky Italia that, “Football is on the ascendancy here and I decided to come and play a part of it. I love the style of sport in America,” Pirlo isn’t the ideal fit for a CDM in the MLS.

For Pirlo, playing in CDM, on a small field, against high pressure must not be enjoyable. Plus, the Italian is 37-years old and does not want to run up and down the field as he intends to sit in the midfield and disperse passes across the field to the likes of David Villa, Jack Harrison, and Rodney Wallace. When he is stuck in defense third of the field consistently, Pirlo doesn’t have the freedom to move the ball around as much and, his lack of speed and desire to play defense hurts NYCFC.

Because of the player, he is today; it would be best for NYCFC to move Pirlo further up in the midfield, thus making him less of a defensive liability and allowing him to have more chances to spread the ball out across the field.

As his replacement, Alexander Ring would fit perfectly at CDM as his high-attacking and high-defensive work-rates makes him the ideal CDM. Plus, the “Flying Finn” has similar tendencies to one of, if not the best, CDM’s in the world right now, N’Golo Kante of Chelsea.

Kante is known for his consistent engine-like presence in the midfield as whenever the opposing team has the ball; he is immediately running over to tackle them off the ball. Additionally, Kante will get forward and provide a key pass now and then to his forwards to spring an attack. These qualities are present in Ring, and Vieira needs to realize that he has the MLS-version of N’Golo Kante playing out of position right now.

To even strengthen the case for Ring, while as Kaiserslautern in the 2. Bundesliga, Ring was a mainstay in the Kaiserslautern line-up at CDM from 2013-2017 before moving over to the United States. Ring has a track record, he has the engine and fitness, and is determined to help out NYCFC in whatever way possible.

Without a doubt, Ring should be moved to CDM in place of Pirlo to solidify the CDM role for NYCFC and to allow “the Maestro” to orchestrate more attacking chances for the Boys in Blue. Time will tell if Vieira decides to move Pirlo, but a switch seems imminent, as Vieira has subbed Pirlo off early in the second half in each of the last two games.

Will Vieira move Ring to CDM in place of Pirlo? We shall see.

Not Good Enough As Union Lose Again
3 Things To Watch For as NYCFC Head to Philly To Face The Union
Posting....