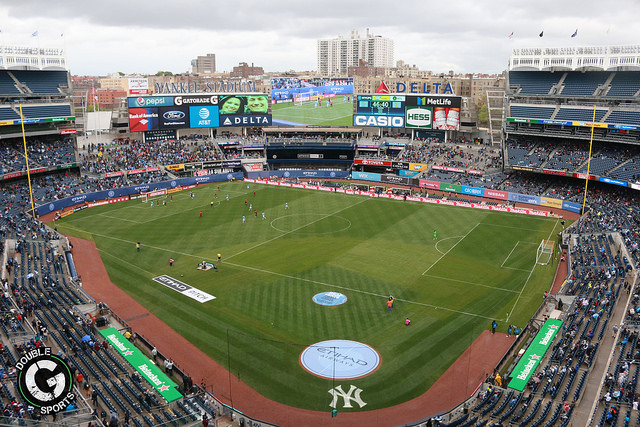 It looked like NYCFC would ride a Miguel Camargo game-winner to yet another home win. But Kelyn Rowe and Xavier Kouassi had other plans. Rowe sent a curling cross onto the far post, Kouassi finished the pass and the Revolution fought for a 2-2 draw. It was the first time this season New York City (6-6-2) has allowed a goal in the final 15 minutes.

NYCFC  coughed up an 86th-minute goal to flush two points, giving up a header to 5-foot-8 Xavier Kouassi that had coach Patrick Vieira in the locker room telling his team in no uncertain terms how disappointed he was.

“We’re a strong team,” midfielder Mikey Lopez said. “Unfortunately [Wednesday night] wasn’t the result we wanted, but we know that we can grind these games out.”

The Revolution (4-5-5, 17 points) started the game well. Coach Jay Heaps fielded a 4-3-3 in an attempt to pin NYCFC’s fullbacks deep and hamper their efforts to build up from back to front. It mostly worked except for when City found its way through the pressure and into gaps between New England’s midfield and defense. Maxi Moralez and David Villa turned this vacancy into a home.

Villa was able to float into that space on left wing and dribble past five Revolution players and surge into the area. He cut back to an open Jack Harrison who finished into the empty net in the 16th minute for his sixth goal of the season and second this week. The lead would last 10 minutes as City’s zonal marking scheme lost Kei Kamara allowing him to redirect a corner past Sean Johnson from a tight angle with no defender nearby.

“We are frustrated because we feel like we’ve thrown two points away,” said head coach Patrick Vieira. “I’m disappointed because when you lead at home twice, you expect to take the three points.”

NYCFC’s last home draw was against the Montreal Impact on March 18, when they squandered a one-goal lead in the second half. On Wednesday, Revs’ midfielder Xavier Kouassi’s goal stole what should’ve been an NYCFC win.

What’s Next For NYCFC?

Saturday’s home match against the ninth-place Philadelphia Union (1-3-2 away) becomes a must-win situation for third-place City (6-5-3).