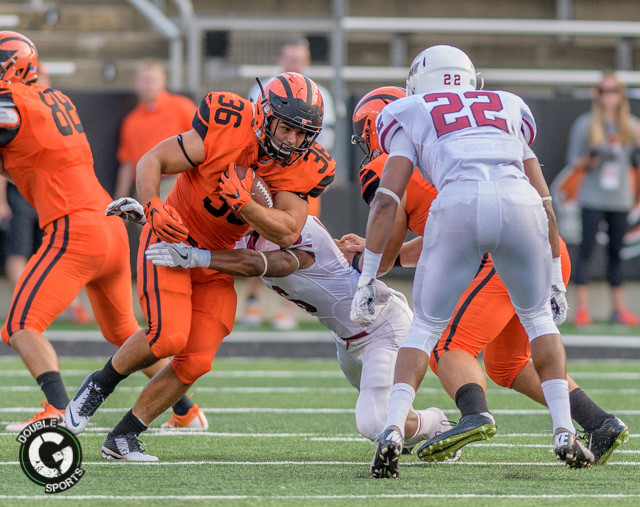 Princeton football did what it needed to do Saturday.

Now it has a shot for the Ivy League title.

Junior John Lovett rushed for three touchdowns, including two 1-yarders in the fourth quarter, and senior AJ Glass had a 46-yard TD run to power Princeton to a 31-3 victory over Yale at the Yale Bowl in New Haven, Connecticut.

Now in a three-way league tie with Harvard and Pennsylvania, Princeton (7-2, 5-1 Ivy), which has won three straight and six of its last seven games, prepares to host Dartmouth (4-5) at Powers Field at Princeton Stadium on Senior Day Saturday with kickoff slated for 1:30 p.m., setting up a title chance for the Tigers on the final day of the Ivy League season.

Lovett moved to within one TD of Keith Elias’ single-season record of 19.

Freshman Tavish Rice kicked a 40-yeard field goal in the second quarter to give Princeton a 10-3 halftime lead.

Ranked seventh nationally, the Tigers limited Yale to just 36 rushing yards, registered five sacks and did not give up a touchdown for the second straight week.

How good is the Tigers’ defense? They have allowed one TD and one field goal over its last 44 drives.

Senior inside linebackers Rohan Hylton and Luke Catarius combined for 16 tackles, two sacks and four for loss to pace the Tigers defense.

Glass had a team-high 64 yards on eight carries and sophomore Charlie Volker added 53 yards. Senior quarterback Chad Kanoff completed 14-of-25 passes for 128 yards, with a career-best 95 of those yards on six receptions for sophomore Jesper Horsted.

“I’m obviously disappointed with the outcome. Princeton is a really good football team and they’ve been really consistent throughout the league all year long. They haven’t let up a lot of points and they’ve been scoring at a record pace,” said Yale’s head coach Tony Reno.