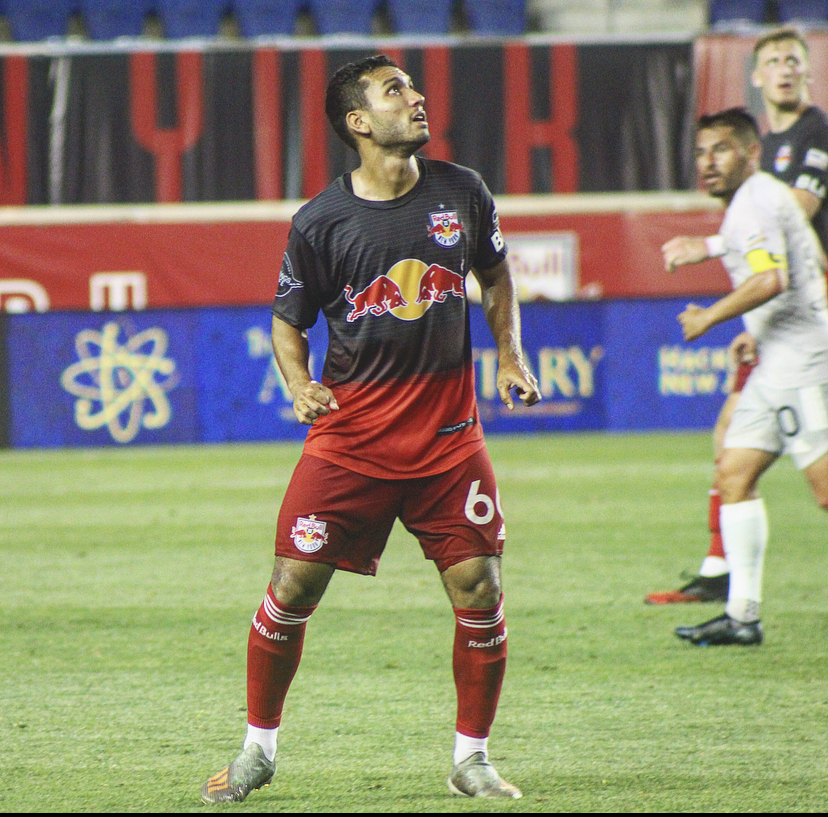 Barry Sharifi said his parents “kind of forced” him into starting soccer when he was four years old. Fast forward almost twenty years, and now the midfielder is playing soccer with the New York Red Bulls II.

The Red Bulls drafted Barry Sharifi in the third round of the 2020 Major League Soccer Super Draft. Most of the Red Bulls joined the team after great careers in college or high school, but Sharifi not only excelled as a college athlete, he became an offensive juggernaut for the Red Bulls U-23 team. The Long Island native impressively scored 17 goals in 25 matches for the Red Bulls’ U-23 academy team.

Sharifi signed his first professional contract with the Red Bulls II on Mar. 5, 2020.

Where It All Started

Sharifi was born and raised on Long Island in his hometown of Jericho, New York. Barry said he lived “very close to where Tim Parker grew up” in Hicksville.

Soccer wasn’t something he thought of trying until his parents put him in it when he was four. But his dreams to go pro weren’t just because he found himself enjoying the game. When he was 12, his parents made a decision that forced him to grow up rather quickly.

“When I was in middle school, I was really enjoying my soccer. My parents had left to work in the military as linguists, so both my parents were gone [and] I kind of had to grow up quick and that meant deciding what I wanted to do and how I wanted to live. That’s when I knew I wanted to play soccer professionally.”

Sharifi developed as a soccer player during his time at Albertson Soccer Academy. The Academy gives young players experience playing against the best competition in the United States.

Then, another accomplishment when he was 13 helped move his development along.

“I [was playing] with Albertson and I had not made the roster, so I was on the pre-academy team,” Sharifi recalled. “A couple of injuries came up in the academy team. When I was called up and four months later, I was the captain of the team. At that point, I really grew as a soccer player and a person.”

After gaining confidence at an elite youth soccer academy on Long Island, Sharifi went on to a legendary collegiate career, which culminated in being drafted by the New York Red Bulls. Sharifi had a fabulous college soccer career at Loyola University, where he became a three-time Patriot League Midfielder of the Year and three-time United Soccer Coaches of America All-Region Honoree.

Sharifi was a staple in the Loyola University Greyhound midfield during a 2017-19 run for the team that included winning three straight regular-season championships. When Barry and his teammate Josh Fawole were drafted in 2020, they became the first Loyola players selected in the MLS draft since 2009.

Barry described what he misses the most about his collegiate career:

Adjusting to the Professional Lifestyle

Sharifi made it clear to me that beginning his professional soccer career had its challenges.

For one, Barry has been trying to learn how to fit his playing-style into the Red Bulls’ philosophy. The Red Bulls coaches employ the “high press” tactic, which requires players who can expend a greater-than-usual amount of energy in order to pursue opponents deeper in their defensive-half. Like all players new to the Red Bulls system, this style of play demands a high-level of fitness, which is something that Sharifi wants to make an even bigger part of his game.

“I was in the academy, for one year, but it was not as intense as it is now,” Sharifi said. “The highlight is on the press and the energy and what you’re willing to bring to the field every day so it’s a lot, yeah. These guys were playing at such a high level and such a fast pace that I was not used to. It was a tough adjustment, but I’m learning.”

Since the United Soccer League Championship resumed its season in mid-July, the Red Bulls II have played ten games. Barry Sharifi made his professional debut on his team’s first game of the season on July 17 against Hartford Athletic. Thus far, he has appeared in eight of his team’s ten matches.

The 22-year-old has come a long way since he was 12 and his parents left home.