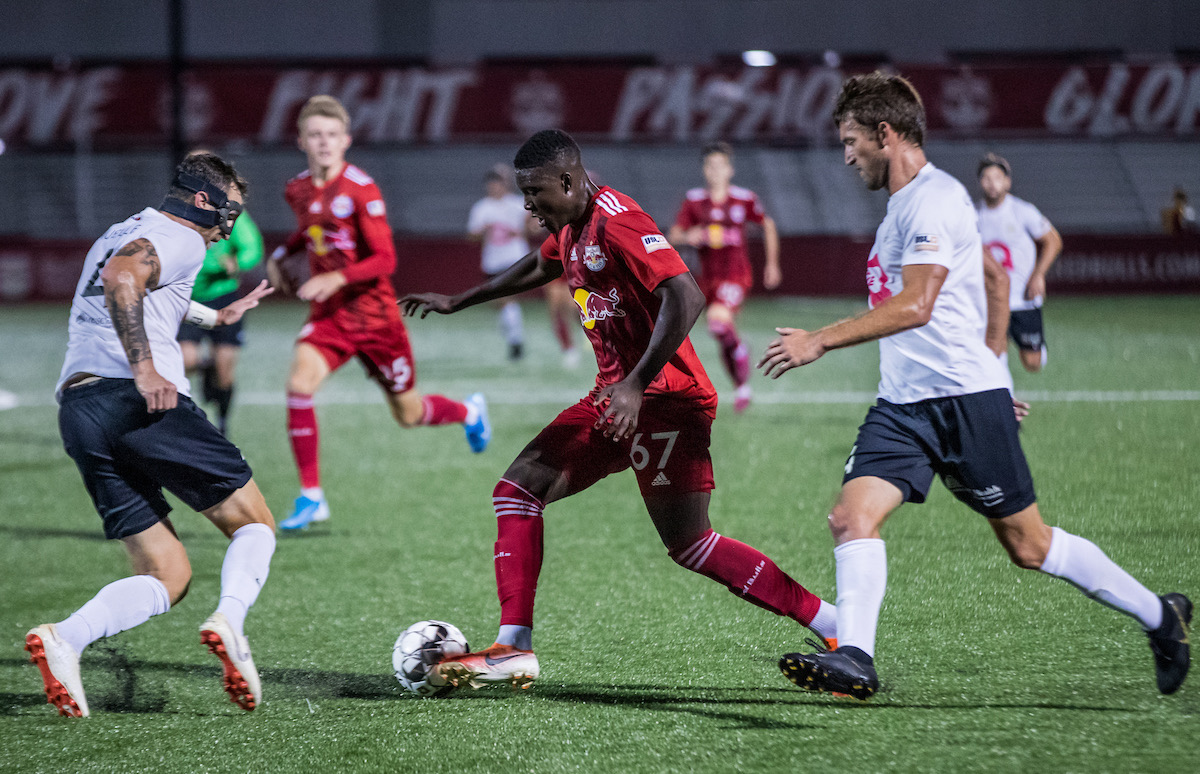 Running with the Red Bulls II: Get to Know Omar Sowe

There might not be many Major League Soccer (MLS) fans who know that Champions League hero, Tyler Adams was once a member of the New York Red Bulls Development Academy. Adams was on the Red Bulls II team that won the 2016 United Soccer League (USL) Cup, and the New York Red Bulls team that won the 2017 Supporter’s Shield. The homegrown Red Bull also helped the United States Men’s National Team win the 2017 CONCACAF U-20 Championship.

Most have heard by now that Adams scored the winning goal for Red Bulls Leipzig in the Champions League Quarterfinal on Aug. 13 that sent RB Leipzig to their first Champions League semi-final.

The success that a homegrown Red Bull like Tyler Adams has had both in the MLS and the Bundesliga, shows that the current Red Bulls academy players should be dreaming big.

Last week on Zoom, I had a conversation with Omar Sowe, a 20-year-old former Red Bulls Academy player, who was a senior at Harrison High School as recently as Dec. 2018. It’s been exactly one year since Sowe signed his first professional contract with the Red Bulls II on Aug. 16, 2019 and in the 13 appearances he has made for the Baby Red Bulls, Sowe has scored four goals.

Once A Red Bull, Always a Red Bull

Omar was born in Serekunda, Gambia. During our conversation, he described the country where he was born as a small coastal country in West Africa. He lived there up until 2009 when he moved to Harrison, New Jersey.

When Omar first arrived in Harrison, Red Bull Arena was still under construction in the area. But, he described the moment when he caught his first glimpse of the arena that would become the New York Red Bulls’ first soccer-specific stadium.

“When I first got here, the first day we were driving from the airport in Newark down the street to my house and we saw the field, and we we’re like, ‘Wow, we don’t even have to worry about anything in this town.’ So I guess my dad already had that planned out.”

When telling his story, soccer was always a part of his childhood. Sowe recalled that he used to play soccer “all day, every day after school.” He described how any travel he did to “other states” was for tournaments.

Sowe added that, even though he is now a professional soccer player, he has not let his success inflate his ego.

“For me, everywhere I’ve gone, everything I’ve done was soccer-related. Going to different places, doing different things, opportunities, it was all because of soccer. Now that I’m a pro it doesn’t really feel different, I feel like I’m just more grown, so like the passion and everything’s still there and I’m just learning every day and trying to become the best I can.”

Shortly after Sowe’s high school soccer season ended in Nov. 2018, he went in for his “first trial” with the Academy. Just a week later, he signed with the Red Bulls U-18 Academy team.

Sowe certainly came prepared to play that season, as he rattled off nine goals in 13 appearances for the Red Bulls’ U-18 club. He spent the summer of 2019 with the Red Bulls’ U-23 squad for whom he appeared in five matches.

Sowe shared that when he was around 11 or 12 years old he had an opportunity to practice with the Red Bulls U-19 academy team, because his older brother played for them. The Red Bulls’ Academy coach asked him which position he would like to play. Having that competitive attitude, Omar told him “anywhere,” so he was put at right-back.

That day, Sowe fondly recalled seeing former Red Bulls’ academy players such as Timothy Weah, Tyler Adams, and Chris Lema. Omar admitted he will never forget being on the wrong end of a Timothy Weah-bicycle kick:

“I was playing right-back and the first play, the keeper chips it to Timmy Weah and he just does a bike on me. I was like, ‘dude, what is going on, this isn’t fair!’ So, I was just like ‘Wow!’ and I still remember that to this day—I remember all those moments.”

Attacking the Next Step

One aspect of Sowe’s personality that stood out the most to me in our conversation was his humility.

Even though he has started out very strongly in his Red Bull II-career, he is not satisfied with his game and is always looking to improve. Sowe even has a good sense of humor, which he displayed by telling me what his academy teammates called him when he first arrived.

“[My teammates] used to call me ‘Chunks,’ [because] I was one of the biggest kids on the field. Obviously, I slimmed down a bit, but when I first came in it was very, very tough. [Until] today, I think that’s one of my biggest things—not being in shape, but staying healthy, I feel like I’m healthy but I know I can always do better every day, so that’s one thing that I like to keep on mind.”

During a post-game press conference after the Red Bulls II win over the Pittsburgh Riverhounds on July 26 head coach John Wolyniec described the aspects of Sowe’s game that he likes the most.

“He has a good mix of attacking qualities, one of his best qualities is he has good soft feet, but he can strike the ball well with both feet. As he learns, as he gets a little bit sharper with the tactics and starts putting himself in better positions to score, I think he’s going to have a lot of success.”

There’s already the coach’s praise and encouragement… Now it’s up to Sowe to produce results.

“My top goal every day is to be the best and for me, I learned that it only takes hard work. It’s the little things, for example, staying in shape, being in good health condition, they are big factors [in terms of] my number-one goal that I want to be the best. So, every day, day-in and day-out that goal is always in my head.”