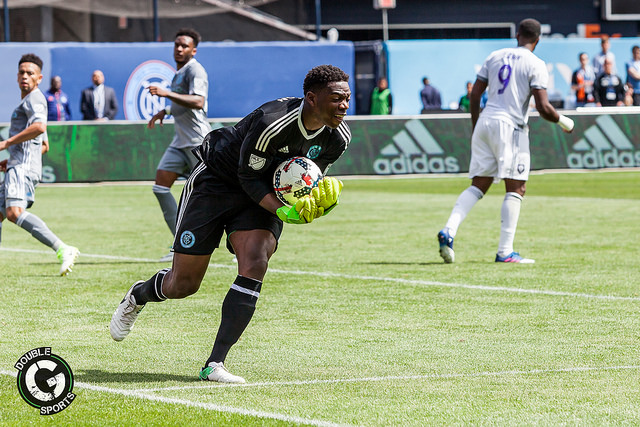 In what lived up to be an actual Texas-sized showdown, NYCFC fought hard against undefeated FC Dallas earn a point on the start of a month-long road trip.

Tommy McNamara made his return to the Starting XI to replace Yangel Herrera who is away on international duty. Andrea Pirlo was not in the squad as he did not make the trip down to Dallas.

As a writer, I try to give readers an answer to questions they may have about NYCFC. However, I do not have any explanation for why NYCFC are so inconsistent in the first half of matches.

Tonight match was another perfect example of that inconsistency.

From the start, NYCFC wasn’t able to establish possession in the attacking half of the field. FC Dallas pressed NYCFC high up the field, and the Boys in Blue couldn’t find an answer. After a nearly scoring early in the first half, FC Dallas opened the scoring in the 20th minute via a Kellyn Acosta bullet past Sean Johnson.

After earning their first goal of the match, FC Dallas kept applying the pressure all first half. However, that pressure did not translate into a second goal, and NYCFC laid one goal adrift at halftime.

During his halftime interview, head coach Patrick Vieira stated that the front three “need to hold more possession.” David Villa was almost invisible out there, as he barely made an impact in the first half of play.

After what was most likely a stern lecture at halftime from Vieira, NYCFC came out with new life in the second half, similarly to last week against Atlanta. After twenty minutes of dominating play, NYCFC got their goal via arguably their worst player in the first half, Tommy McNamara.

In the 68th minute, Villa smashed an NYCFC free kick off the crossbar. Following the rebound, McNamara disregarded his life and dove in to hit the ball into the back of the net to tie things up at a goal apiece.

Following the NYCFC goal, FC Dallas began to regain momentum and pushed for a winner. However, NYCFC held off the Bulls of Dallas and earned a point, a well-deserved point at that.

Man of the Match: Sean Johnson

During the second half, FC Dallas had multiple chances in front of goal, most of which should have found the back of the net. Unfortunately for FC Dallas, Atlanta native Sean Johnson’s tremendous performance tonight kept FC Dallas at one goal on the evening.

Instead of making extravagant metaphors to describe his performance, just watch this monster save.

After tonight’s match, NYCFC fans can say in unison that they are glad Johnson is in goal this year instead of mistake-prone Josh Saunders. Without Johnson tonight, NYCFC loses embarrassingly. Well done, Sean. You earned Man of the Match Sunday evening.

NYCFC has finally proven to rid one of its problems from a season ago. That problem? Grinding out results.

In the Texas heat, it was evident that NYCFC was not at their best tonight. McNamara was rusty and problematic in the midfield, Ben Sweat had his worst performance of the year, Villa was invisible throughout the entire match, and Moralez wasn’t clicking in the midfield as usual.

Despite the team being off, NYCFC found a way to scrape a point out against the toughest opponent they have faced all year. Last year, that was not the case. Therefore, there is a lot to be happy about with this result for NYCFC fans.

Personally, I am starting to think that NYCFC is best with a four-back formation that does not include Pirlo. However, I would like to see him given another chance. After all, it is possible that a stay on the bench is exactly what the Italian has needed.