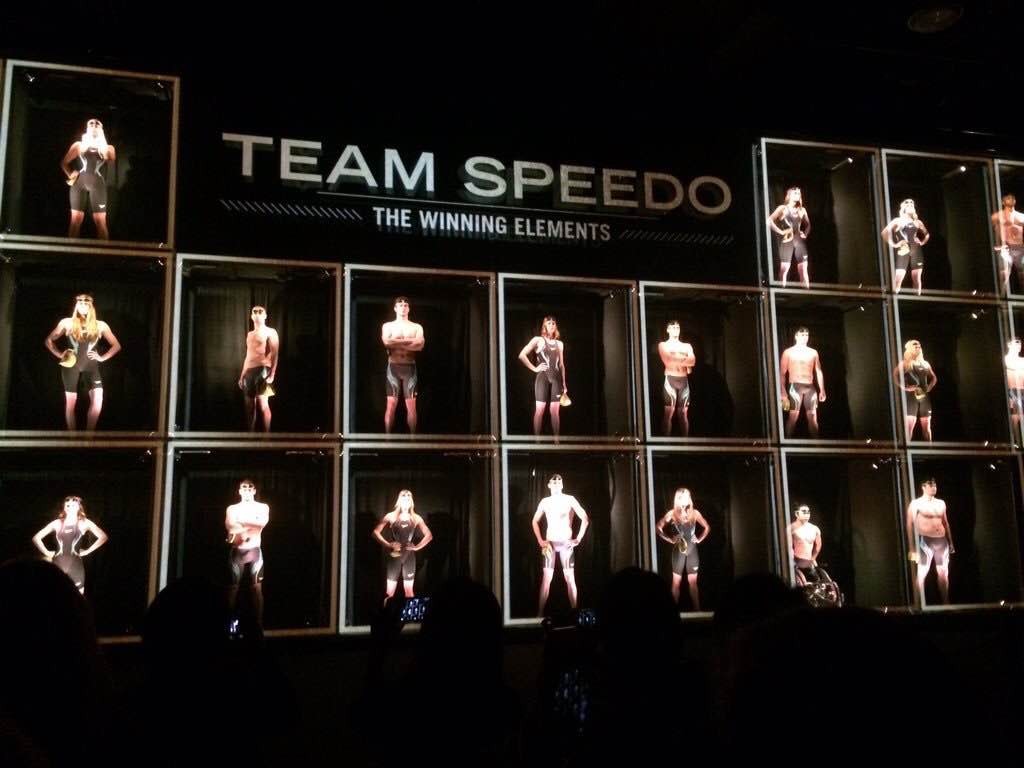 New York – “It feels great knowing that you have the best technology when you step up on the blocks and you have a suit that works and has been proven time and time again.”

It was the message spoken by twelve-time Olympic gold medalist, Natalie Coughlin, at the official launch of the newest Speedo racing suit, the Fastskin LZR Racer X, for the 2016 Summer Olympic Games in Rio de Janeiro.

In a chic late-afternoon event at the trendy, SIR Stage 37 in Manhattan, 24 members of Team Speedo were unveiled by spotlight, one-by-one, against a voguish backdrop of black and gold to an audience of eager spectators. In what at first glance appeared to be life-sized artificial versions of each athlete, Speedo revealed the swimmers modeling the official racing suit, noting its sleek gold details and overall structure that, “is engineered on look, feel and speed to maximise performance and create the optimum hydrodynamic conditions for speed in the water.”

Carrying an impressive history of 78 Olympic medals and 12 world records between them, the 24 members of Team Speedo in attendance included gold medalists’ like Ryan Lochte, Missy Franklin and Grant Hackett and world record holders like Mireia Belmonte, Thiago Pereira and James Guy.
Following the mod reveal was a panel discussion in which each athlete answered questions on things like how they define success as an Olympian, what it’s like getting to be a part of team Speedo and why this iconic racing suit is so special.

“The most important thing with the suit, no matter what, is wearing one that makes you feel confident,” said four-time Olympic gold medalist Missy Franklin, “It makes me feel the most confident behind the blocks and then you pair that with the technology of the actual suit, which is incredible, the suit gives us the ability to keep our hips up higher in the water, it keeps our core engaged and not having to think about these things and just focus on racing is a huge emphasis for us. It makes it so much easier for us to just get out there and swim.”

As a spectator it’s easy to judge the racing-life of a professional swimmer from what can be seen on the surface, or in this case, in the water, but competing at an Olympic level means that every inch of the racing suit is crucial to swimming success. In their rich 87-year history, Speedo has developed a superior technology and perfected their design to create a racing suit like the Fastskin LZR Racer X that allows the athletes they represent the best possible chance at success.

Aside from their accomplishments working with Speedo and their own success in the water, Franklin and co-panelist Thiago Pereira noted that being an Olympic athlete means that they have a responsibility to spread the message on the importance of learning to swim. In the words of several panelists at the evening’s event, it’s more than just a sport; it’s a crucial life skill.

Franklin noted several times throughout the night that swimming is the only sport that can both save your life and be practiced for the rest of it. Pereira on the other hand more candidly noted that it would certainly be a shame to survive a plane crash only to land in the water and not know how to swim.

Although most civilians won’t ever get the opportunity to wear the Fastskin LZR Racer X, unfortunate plane crash scenario or otherwise, the elusive technology woven seamlessly into every detail of the racing suit will certainly give Team Speedo athletes competing in Rio an excellent chance of bringing home the gold.