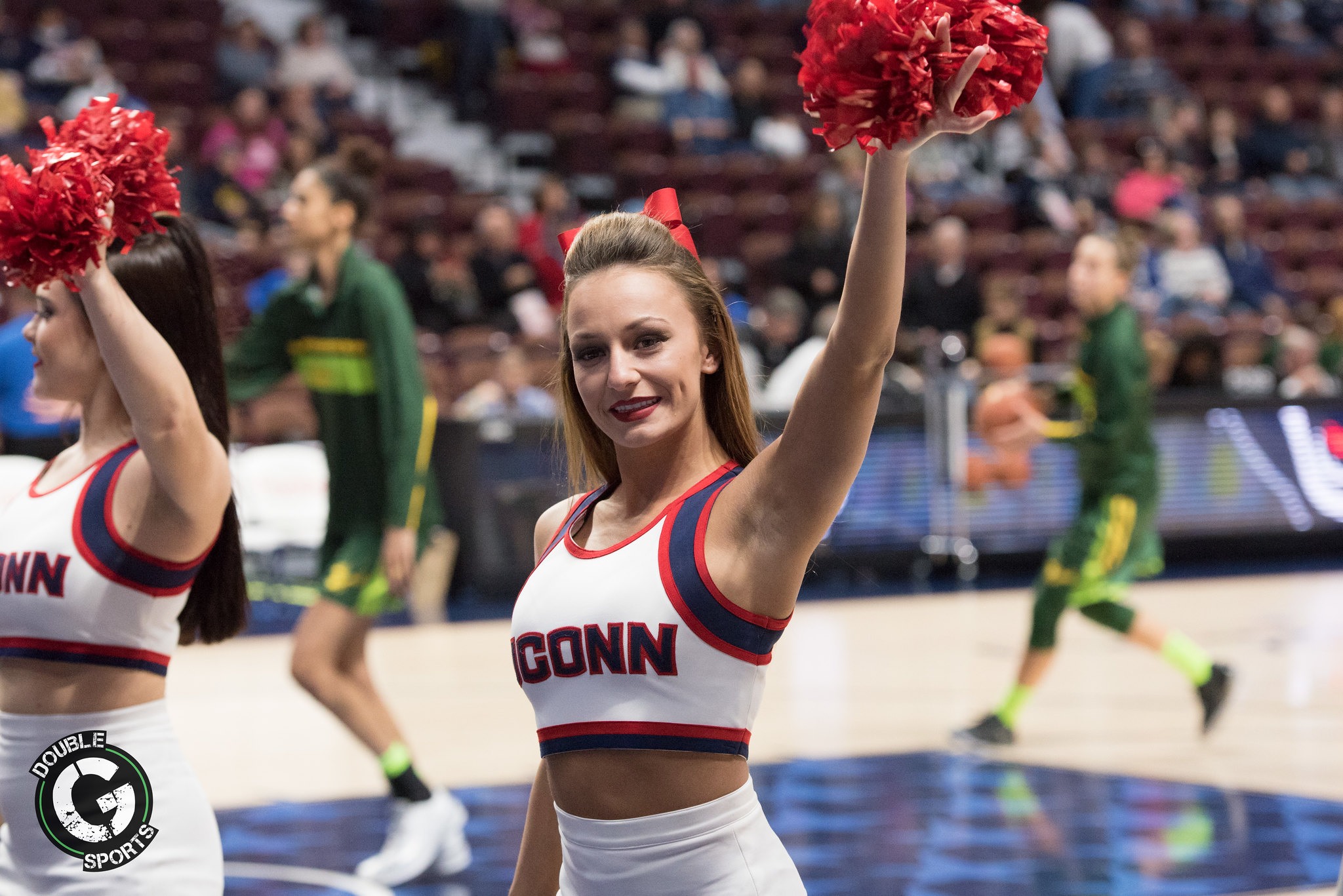 Game days for UConn fans would not be complete without UConn cheerleading.

Game days for University of Connecticut fans would not be complete without the bright smiles, glittery pom-poms, and flawless stunts of UConn cheerleading. However, as Rentschler Field sees its first fall without football since opening in 2003 and college basketball’s fate remains unknown, the squad is preparing for a much different 2020-2021 season.

“We are planning to step up our social media presence and teach people about game day [traditions] without there being game days,” says Samantha Breault, head cheerleading coach and coordinator of UConn Spirit, Pride, and Tradition. “Our goal is to bring happiness to people through our social media to take them away from some of the hardships they might be facing.”

This is no small feat. Last fall, supporters were planning their tailgates and counting down the days until they could buy season tickets to their favorite winter sports. Now, they face a deadly pandemic, an unemployment rate that has more than doubled, and social isolation. 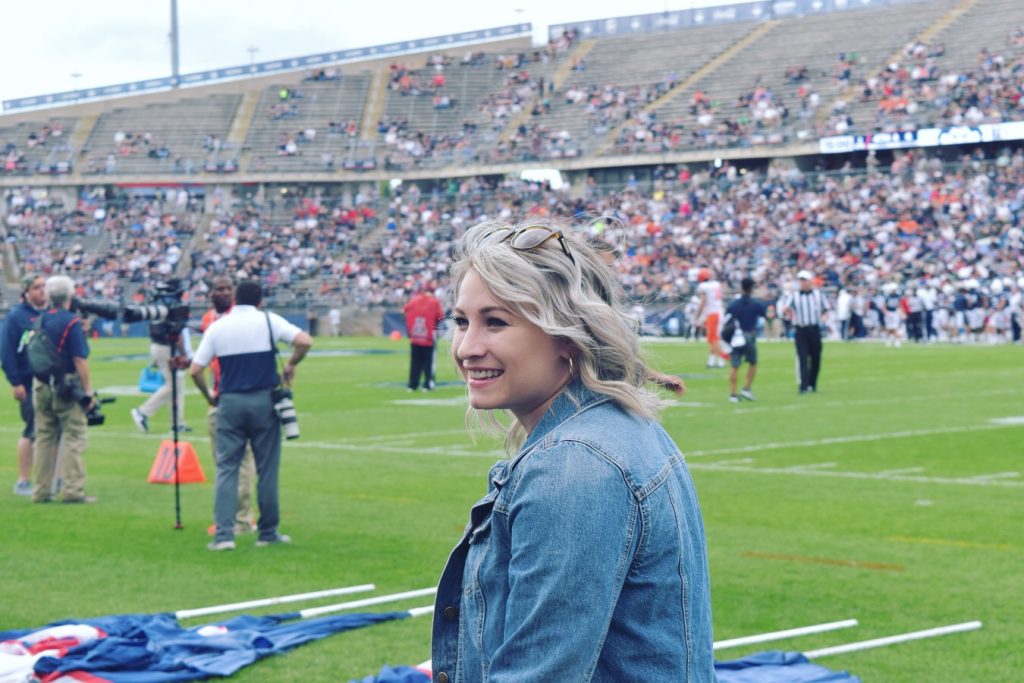 These impacts have hit the UConn cheerleading team, as well. As they prepared for March Madness, a busy time at a school with 15 national titles in men’s and women’s basketball, life suddenly changed. Universities sent students home to complete their semesters remotely as the college life they once knew disappeared. For student cheerleaders, this also meant an incomplete season.

“I’m not going to lie and say it’s been easy,” shares Breault, entering her sixth year with the Huskies. “It’s definitely been difficult. I think myself and my team have gone through a wave of emotions. At first, there was sadness in losing March Madness and our seniors missing out on the end of their year.”

Despite the unexpected ending, we are incredibly proud and grateful for every moment we cheered together this season. This year alone, we competed for the first time in a decade, hit our first night routine, and became even more talented than we could have imagined. Thank you to Coach Sam and Coach Britt, for pushing us to get better, as teammates and as athletes, and believing we could become the team we ended the season as. To our seniors, you affected our program in ways that will last far longer than the years you spent on the team. Thank you so much to student activities, athletics, and marketing for believing in us and giving us the opportunity to showcase our skills. Most importantly, thank you to UConn Nation for cheering with us from the stands at games and supporting us at nationals. This is only the beginning. We’ll see you next season! #IGYYGM #BleedBlue

2020-2021 cheer captain Avis Ebron said he felt similar emotions, but tried to stay positive for the fall. “At first, I didn’t think it was going to last this long. It cut my season short, [we didn’t have] any March Madness games, but I thought ‘it’s fine, it’ll probably clear out.’”

Despite the initial optimism, the psychology major from Waterbury now faces a different type of senior year. A majority of classes have remained online to help mitigate the spread of coronavirus. Given the highly contagious nature of COVID-19 and increasing cases across the nation, many fall sports have been postponed or canceled entirely.

“Seeing how far it has progressed where now it’s impacting the football season, it kind of hurts because … I love our football team, and because this is my last year, this is my last chance to cheer for football.” 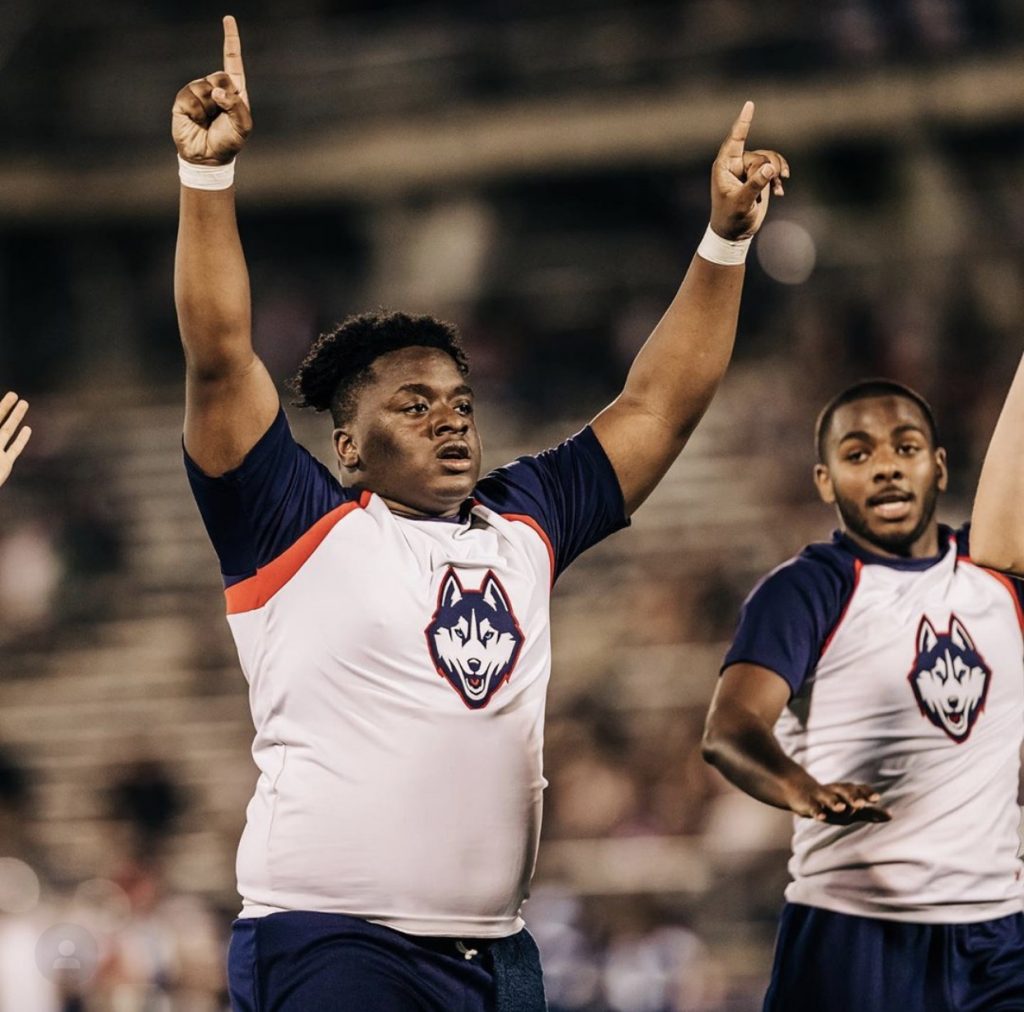 While this came as a disappointment, it also gave the cheer captain a new perspective and motivation for his future in cheer.

“I’m trying to put 110% into cheering for whatever sport that may happen this year because knowing this is my last year; I have to give it my all … I didn’t know my last football game to cheer was going to be last season. I thought I had a whole other season this year. [I’ve learned that] no matter what you’re doing, whether it’s cheerleading, sports, college, or even just school or [being young], enjoy it as much as you can.”

In spite of the obstacles in their way, both Ebron and Breault are both looking forward to when UConn cheer can be reunited with their loving community.

Ebron, who joined the roster as a sophomore, describes the cheerleader-crowd relationship as a symbiotic one. “I don’t think the fans realize that … we feed off their energy too.  I still need them to be as hype and as engaged as possible so that everyone can still feel that type of energy, whether it’s a full crowd or people watching from home.”

Audiences should expect a full-strength team when they can return. Despite misconceptions, the head coach and Syracuse alum shares that cheerleaders, like athletes in any other sport, partake in a multitude of different forms of preparation. “I don’t think people realize how cheerleaders have to push themselves just as other athletes do. Not only do they have to go to practice but they also have to keep up on their muscle building and that sort of skill as well.”

Until that time comes, the squad will be practicing remotely. “Every virtual practice and thing we do is one step closer to being back together. We’re trying to look at this in a positive light and just realize that the steps we are taking are helping keep our community safe and bring us one step closer to seeing each other,” notes Breault. “As much as UConn fans are so excited for game day to come back in the future, so are we, and we will be waiting right here with them.”

Starting our week off safe with a reminder for the upcoming semester!

Double G Sports sends our support to UConn cheerleading and will continue our coverage of the return of college sports.

For Brock Riley, it’s been a long but worthwhile journey in baseball
Dancing With The Stars Season 29 Cast Announced