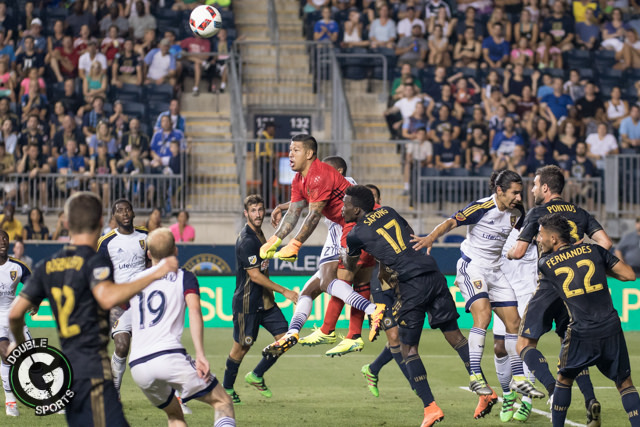 There are very few forwards that spend their seasons with single digit goal totals and still get praised for their efforts. CJ Sapong is among that hollowed class of forwards, and for good reason.

In 2015 Sapong started the year off hot. The Philadelphia Union were playing well and Sapong was scoring, assisting, and doing the little things that don’t show on the stat sheet. Fans were pleading to get Sapong a US National Team call up. That all came to an abrupt stop – literally. A DUI that saw him suspended in the middle of his hot streak cooled any promises of a career season.

Sapong is now two years removed from that time in his life. Two weeks ago at Union Media Day I saw a changed person. A man who is ready to lead the lines and do what it takes to help the team win.

There is a small table of reporters asking Josh Yaro questions about the upcoming season. The door to the room swings open and in walks CJ Sapong. “Ah, must be nice,” he says with a grin concerning the overwhelming attention the young defender is receiving from the press. CJ proceeds to give Josh space as the interviews wind down. As soon as Yaro is up from his chair the elder Sapong is joking and putting his arm around Yaro. It almost brought a tear to my eye it was so adorable.

Sapong was next to take the hot seat with the team of reporters. What he talked about through the interview put the previous few minutes into perspective. It was quite clear through presence and actions that CJ Sapong was a leader in the Philadelphia Union locker room.

When asked about the disappointment of last season, CJ took it head on saying, “The last season shook off when last season ended. We are all moving forward and you can tell in our training sessions and the atmosphere we have. Everybody wants to take it a step further this season. When you introduce accountability to the situation you are not being accountable only to yourself but to your teammates as well. Whatever we’re doing we’re doing it together.”

In regards to becoming a leader in the team Sapong embraced that role as well. “It’s funny it kinda crept up on me. Next thing I know I’m six years into the league now. The rookies are asking me where to put their gear and where the towels are. I do embrace that role and I’m glad they feel like they can look to me. On and off the field I definitely make an effort to let everybody know I’m here for the team. I want all of us to be better and it starts with myself. I think over the years me actively pursuing being a better me on and off the field has helped me help other people. It’s cool to go through that process myself and witness it for others too.”

With all the depth at forward and on the wings, the team seems to be sticking like glue. Veterans like Sapong will be critically important to lead the lines and make everyone on and off the field better. There are 21 other teams that think they have something special this preseason but the Union have depth and a mold. It’s powerful for a team that won’t spend money on designated players like LA Galaxy or Atlanta. The group has to believe and be strong enough to take on the superstars of the league.