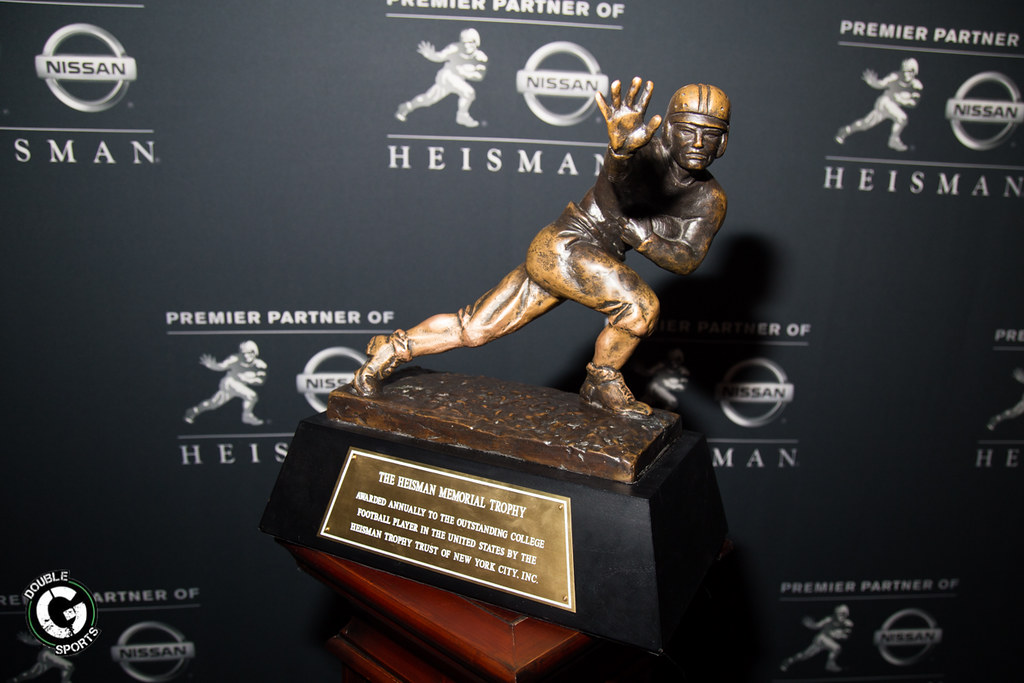 America needs college football. This is the phrase that I have been repeating for months now since this pandemic started. Take basketball away, you can have hockey, but do not take away the beauty that is college football. It is an American staple that needs to happen on an annual basis. Without it, what is the point of even having a fall?

With that being said, I am going to continue to write, and continue to prepare for the college football season ahead. Why? Because optimism in these tough times is crucial. I am not going to sit here and lose all hope. College football IS coming, so we might as well be ready for it. Now let’s discuss some damn Heisman hopefuls.

Over the last few years, Oklahoma has established themselves as QBU. In 2017, a former walk-on named Baker Mayfield won the Heisman Trophy and led the Sooners to the CFP. One year later, a scrambling sensation named Kyler Murray followed suit, taking home the schools second consecutive Heisman Trophy. He would also go on to lead the Sooners to an appearance in the CFP. This past season, Jalen Hurts, who was a transfer from Alabama, led the Sooners to their third straight CFP appearance and was named a finalist in the Heisman race. Three years, three QBs, two Heismans, three CFP appearances. Pretty damn impressive if you ask me. If you want to be the next QB at Oklahoma you can’t just be good, you can’t even be great. You must be elite. The bar has been set that high.

Looking to continue this rich QB tradition in Norman is none other, then Spencer Rattler. Rattler, a 6-foot gunslinger from Pheonix, is the type of QB you dream about. He is quick, versatile and has a cannon for an arm. Coming out of high school, Rattler was THE guy. He was one of the top recruits in the country and was sought after by almost every high-level program in the country. During his Freshman season, Rattler was forced to take a back seat, and watch Jalen Hurts run the Sooners offense. With Hurts now gone, it will be interesting to see what Rattler can do under the intercollegiate spotlight.

Oklahoma State has had just one Heisman Winner in the history of their football program. In 1988, the electric Barry Sanders was awarded the Heisman Trophy after rushing for 2,628 yards to go along with 37 rushing TDs. To this day, it is considered to be one of the most dominant single-season performances in the history of college football.

During a podcast last fall, I claimed that Chubba Hubbard was as electrifying of an RB as Sanders was during his time in Stillwater. I did not receive positive feedback. Now mind you, I was not alive to watch Barry Sanders play at Ok State, but I watched enough highlights to form an opinion.

The reason I made the statement was becuase I knew if Oklahoma State was ever going to have another Heisman winner, it was going to come from the likes of Chubba Hubbard. I watch a lot, and I mean A lot of college football. And let me tell you, Chubba Hubbard is a star in the making.

The explosiveness that Hubbard presents is almost unfair. He is a downhill runner who can accelerate in very tight windows. And once he gets in open space, it’s game over, as he is as fast as the day is long. Last season, Hubbard was able to rush for a total of 2,094 yards, accumulate 21 TDs and rack up 328 carries. These are video game-type numbers.

If last year was any indication of what is to come,  Hubbard and the great people of Stillwater are in for a special season.

This one may come as a surprise to some of you guys, but it shouldn’t. Kyle Trask is not your typical college QB. He was not a coveted high school recruit and heck, he was not even the starting QB when he first arrived to Gainesville. And if it wasn’t for Feleipe Franks dislocating his ankle at the beginning of last season, Trask could very well be sitting on the bench to start this year. But that is why I like this kid so much. He saw an opportunity to shine and he did not waste it.

By last seasons end, Trask had shown the world why he should have never been a backup QB in the first place. He had thrown for 2,941 yards, 25 TD passes and just 7 INTs. When I watch Trask play, I am in awe of just how composed he remains in the pocket. If you are familiar with the SEC, you know that they have some DAWGS at the DT position. To sit in the pocket and make tough throws, knowing you are going to get smacked just seconds later, takes some real guts. Trask is a dime a dozen, and I can’t wait to see what he does come fall.

Perhaps the biggest news that came out of this offseason was the announcement that dual-threat QB, Jamie Newman would be transferring from Wake Forest, and heading south to play for SEC powerhouse, Georgia. Newman, who is a native of North Carolina, is the type of QB that the SEC is imidate going to fall in love with. He is strong, can get the ball out of his hands extremely fast, and plays at a tempo that caters perfectly to the style of college football that is played down south (Fast and Physical.)

However, one problem that Newman may run into during his time in Athens, is the coaching staff. I will be the first to say that I love Kirby Smart, but he is a defensive-minded head coach. For whatever reason, Georgia has had a problem in recent years letting their QBs play to their full potential.

Jake Fromm, who I think is a hell of a talent, was restricted mightily during his time at Georgia. He was not given the ability to run the offense like he had the capability of doing and as a result, Georgia fell just short of their main goal, which was to win a national championship.

With this being said, Georgia will head into this year with Todd Monken as their new OC. Monken, who has spent time coaching at the NFL level, looks to bring a new and improved look to the Bulldogs offense. For Newman’s sake, I hope this is the case, but as long as Kirby is the head coach, I don’t see top much true change happening.

If you haven’t yet boarded the Sam Howell bandwagon, you may want to hop on soon. Howell, who is entering his sophomore season with the Tar Heels, is a star on the rise. I can not recall a young QB who has made such a leap in just one year of playing time. Sure, you can compare him to a guy like Trevor Lawrence, who made it to the national championship game when he was a true freshman, but Lawrence was a big-time recruit. Howell came out of nowhere and made his presence heard right out of the gate.

When Howells freshman year was all said had done, he had accumulated a total of 3,641 passing yards, 38 TDs and just 7 INTs. If you didn’t know of Howells age prior to watching him play, you would think he is a 5th year senior. He plays with composure, poise,  and has an ora about him that states “I have been here before.” Howell is only going to get better from here on out and for the ACCs sake, they better watch out.

Let me paint a picture for you as to how special Trevor Lawrence is. At 18 years old, Lawrence first steps foot on the campus of Clemson University (As an enrolled student.) He is regarded as one of the most coveted recruits Clemson has ever had. He is tall, has luscious locks and fits the picture-perfect look as to what a big man on campus should be. He starts his Freshman season on the bench as Clemson is host to Kelly Bryant, who at the time was a star for the Tigers. Lawrence waits for his number to be called and when it finally does, he does not look back.

As soon as Lawrence took the field, it was clear he was the most talented player on the field. He was stronger, faster and was more athletic than everyone who shared the turf with him. Bryant knew he had no chance to compete so he transferred to Missouri.

With the starting job secured, Lawrence became a star, throwing for a total of 3,280 yards, tossing for 30 TDs, and hurling just 4 INTs. He would then go on to lead the Tigers to a national championship, throwing for 347 yards and 3 TDs against powerhouse, Alabama, in route to a 44-16 win. Lawrence became the first true freshman QB to win a national championship in 33 years.

Trevor Lawrence is the first true freshman starting quarterback to win a national championship since Oklahoma's Jamelle Holieway in 1985.

So what did Lawrence do his Sophomore year you may ask? Oh, nothing, besides lead his team to another undefeated regular season, another ACC championship, and another national title appearance. Lawrence is a competitor, a winner and is THE best player in college football.

When Justin Fields made his way to Athens Georgia as a freshman, he knew he would have to fight for the starting job. Jake Fromm had just come off a freshman campaign in which the Bulldogs appeared in a national title game and were a play away from winning it. For all intents and puposes, the starting job belonged to Fromm and Fields had to have known that.

After a year of hiding in someone else spotlight, Fields decided it was his time to shine. He made the conscious decision to transfer from Georgia and go play for The Ohio State Buckeyes. During the first game of the season, Fields immediately showed Georgia why they should have never let him go. Fields went 18-25, throwing for 235 yards to go along with 4 TD passes in route to a 45-21 win against Florida Atlantic. What transpired next, can only be described as pure, QB magic.

At the conclusion of his FIRST season with Ohio State, Fields had led the Buckeyes to an undefeated regular season, a Big Ten Championship, a CFP appearance and finished 3rd in the Heisman voting. He also produced one of the most impressive stat lines the Big Ten has seen in quite some time. 3,273 passing yards, 41 TDs, 3 INTs, 67.2 comp %, 484 rushing yards, 10 rushing TDs.

Justin Fields is going to be playing the QB position for a long time. And soon, he is going to be making a lot of money doing so. We, as college football fans, have to make sure we appreciate his talents because a guy like him only comes around every so often.

Today, I am not only projecting Fields to be the winner of the 2020 Heisman but I, Peter Snyder, am going out on the limb and saying that Justin Fields will be the first pick of the 2021 NFL draft. Book it, baby.

Where does Seton Hall turn after the graduation of Myles Powell?
North Jersey standout Giuseppe Papaccio makes successful transition from player to coach