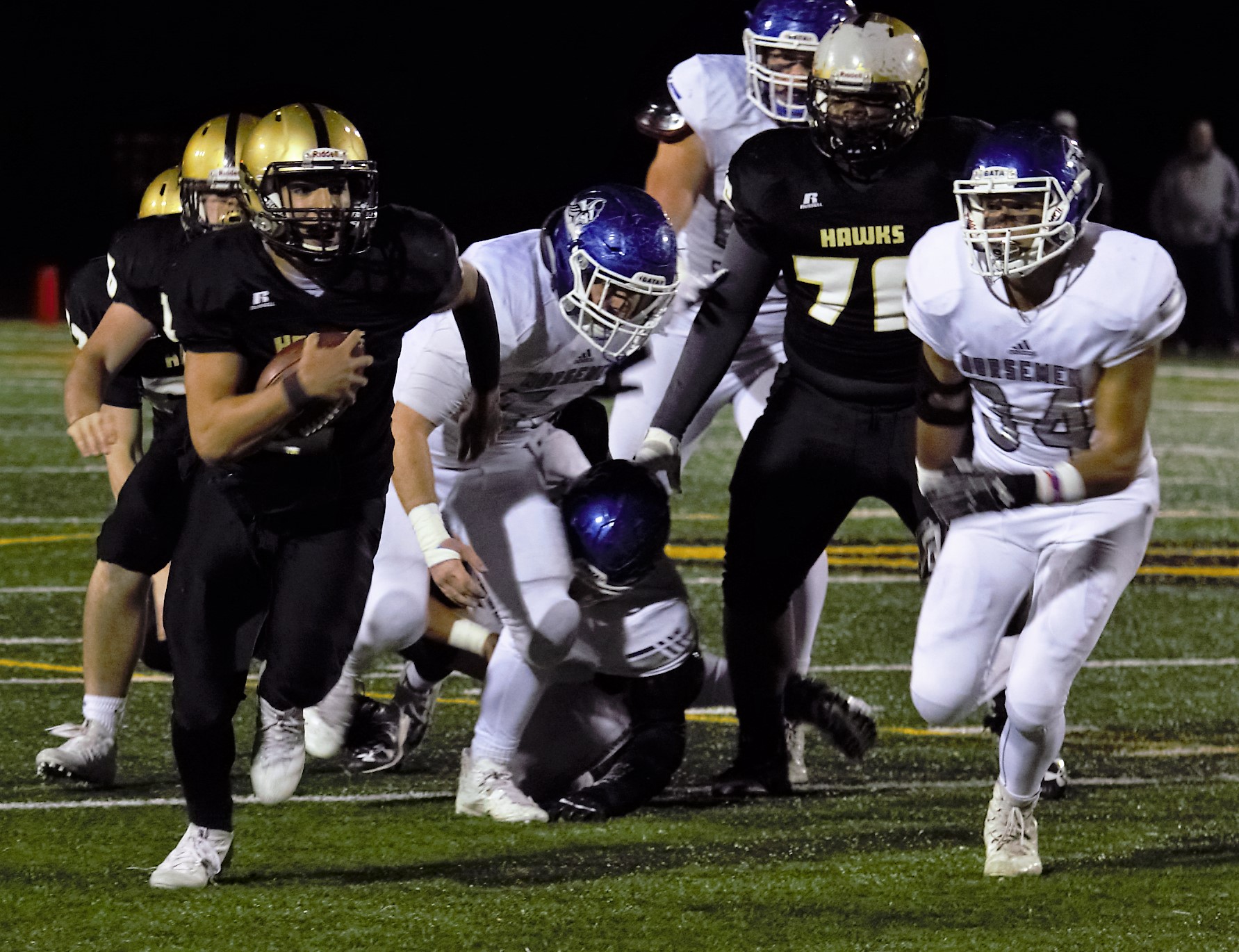 River Dell will next face Ramapo in North 1, Group 3 Final

Facing a fourth & 20 at the 35 after consecutive penalties assessed against the Golden Hawks, Estevez scrambled out of the pocket and eventually found Racine for a 25-yard gain to the Norsemen 10. With time winding down, Estevez rolled out and fired a pass to Racine in the endzone for a nine-yard score with 36 seconds remaining, putting River Dell up 38-34.

“Ran a 25-yard out, had to freaking throw a rifle and luckily the defender did not come in time and deflect it and got the first down,” said Estevez. “Jack (Racine) is a very good player and really works hard on our team. At halftime I got us all together and said this is the last half we’re playing together on this football field and either we’re playing for the last time or at Met Life Stadium. They (NV/Demarest) have a great team and knew coming in it would be tough. We had a big lead in the beginning and they fought back and we did and came down to one big play.”

“A great game and we couldn’t give it up and battled all night and back and forth,” said Racine. He (Dave Estevez) is amazing and love playing receiver because the play is never dead and you can get open and the ball. The best leader I have ever played with. We never felt we were out of it and our game to lose.”

“We prepared all week and best quarterback (Austin Albericci) we faced this year and just had to play some good defense and we were there. There is no other place I would rather play at and tonight loudest it’s been. We work for this, 365 days and now get a chance to do it again and not take it for granted.”

Just when you thought the game was over, Norsemen quarterback Austin Albericci (6 rushes for 39 yards, 14 for 20, 187 yards, 3 TD’s) refused to throw in the white towel, completing a 15-yard pass on 4th down. With eight seconds left on the Golden Hawks 40, Albericci took the snap and scrambled out of the pocket launching a Hail Mary bomb into the end zone. Numerous players converging on the play, River Dell defensive back Dave Fletcher knocked the ball away securing the victory and setting off a wild celebration.

“I have to thank Dave Fletcher for deflecting the ball and saving the game,” Estevez said. “All year in practices and during the summer we worked really hard. Since we have a lot of experience we’re very calm and have composure. I have been playing here since I was a freshman so I love this place and special and seeing everybody in the community come together means a lot and never get to experience this again.”

DJ Nimphius on the victory, “Going to enjoy this one and we’re fortunate, a 50-50 game. An epic game and bunch of kids on both teams’ fighting it out and doing the best they can and a great football game. We have been in a lot of dogfights and fortunate to come away with the win. I’ll get to enjoy it for a day and then start preparing and get two more weeks to coach the kids and fortunate to do that. Dave (Estevez) has got to go there (Met Life Stadium) four years in a row and we only have 10 seniors.”

Next up for River Dell (10-1) is Ramapo (9-2) in the North 1, Group 3 sectional final in the first weekend of December, most likely at MetLife Stadium. Earlier this season, the Raiders ended the Golden Hawks 11-game unbeaten streak 23-20 at River Dell High School. Last season River Dell defeated Ramapo in the state playoff semifinal game at Ramapo High School 35-21.Two years ago in the sectional final the Raiders crushed the Golden Hawks 45-15.