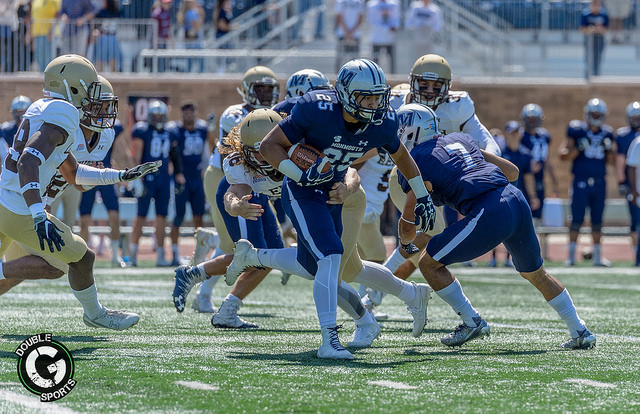 WEST LONG BRANCH, NJ – For the second time in program history, the Monmouth Hawks defeated a ranked program as 26 unanswered second half points downed the No. 19 Lehigh Mountain Hawks, 46-27. The program’s first victory over a ranked opponent came on Oct. 17, 2015 when the Hawks defeated No. 21 Liberty in overtime, 20-17.

Freshman running back Pete Guerriero followed up his impressive collegiate debut, which saw him earn Big South Freshman of the Week honors, with another huge day. It began with the opening kickoff, which he ran back 70 yards before stepping out of bounds at the Lehigh 26. He finished the game with 189 rushing yards on 25 carries and two touchdowns.

While Guerriero deserves credit for another dynamic performance, he was quick to give credit to his experienced offensive line.

“It definitely makes it easier running behind [the offensive line]. The running backs and offensive line are really close with each other,” Guerriero said. “Every single day at practice we talk about being patient and running behind them. They open up holes that is like running through a tunnel. It is great to be behind such an awesome five.”

Monmouth got on the board six plays after Guerriero’s opening return as junior running back Devell Jones rushed in from six yards out. The extra point attempt was blocked and Monmouth jumped out to a 6-0 lead.

After a Lehigh three-and-out, Guerriero made his presence felt once again with a 71-yard sprint untouched to the end zone. Jones converted the two point conversion, giving Monmouth a 14-0 lead.

The Mountain Hawks answered with back-to-back scoring drives to tie the game at 14. Brad Mayes found Troy Pelletier from eight yards out and Gatlin Casey from one yard out to tie the game as the first quarter came to a close.

The game remained close throughout the second quarter. Monmouth scored on its first drive on a 24-yard field goal by senior kicker Matt White, but Lehigh responded with a 12 play, 78 yard drive capped off by a Dom Bragalone touchdown that gave the Mountain Hawks their first lead of the afternoon.

Monmouth scored one more time before the intermission on a 31-yard field goal by White, and the Hawks went into the locker room down 21-20. Lehigh came out of the half and struck quickly as Mayes connected with Luk Christiano for a 54-yard strike on the second play of the drive. The extra point attempt was no good, and Lehigh went up 27-20.

It was all Monmouth from that point on. 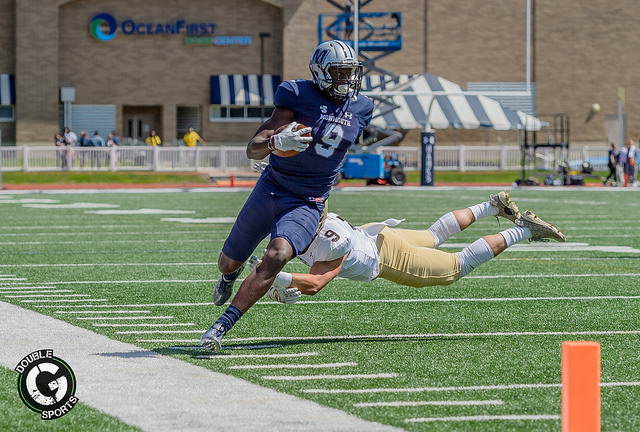 Two drives later, Bahar broke a 56-yard run on third-and-11, setting up Jones’ second touchdown of the day. White converted the point after and the game was tied at 27.

After a Lehigh punt, Bahar found redshirt junior wide receiver Reggie White Jr. on first down for a 28-yard gain. Three straight Guerriero rushes gave the Hawks another first down, and Bahar connected with sophomore wide receiver Lonnie Moore on third-and-13 for a gain of 32 yards. Guerriero scored his second touchdown of the game two play later capping an eight play, 80 yard drive, and Monmouth took a 33-27 lead as White’s extra point attempt was blocked.

The Hawks found the end zone two more times in the fourth quarter. Set up with second-and seven after two Guerriero rushes, senior running back Michael Jolly broke off two straight 31-yard rushes, the second for his first touchdown of the season. Monmouth failed to convert the two-point conversion, but had a 39-27 lead with 11:23 remaining.

Jones’ third touchdown of the afternoon from four yards out with 5:02 on the clock sealed Monmouth’s second victory over a ranked FCS opponent in program history.

“I just think it was a great team effort throughout the entire game,” Monmouth head  coach Kevin Callahan said. “We talked to our guys all week about how this would be a four quarter game because each of the last four years we’ve played Lehigh, it’s gone right to the fourth quarter.

“I was happy about how we took the lead in the second half and turned that into a dominant fourth quarter in particular. Our defense did an outstanding job in the second half of getting themselves off the field and giving the ball back to the offense. I can’t say enough about the job our offense did. Rolling up 350 yards on the ground and throwing for over 200 yards is just an outstanding performance.”

Bahar finished 15-21 with 204 yards through the air and also ran for 61 yards. Jolly racked up 73 yards on just five carries and a score.  Jones found the end zone three times out of five rushes. The Monmouth offense totaled 351 yards on the ground. With plenty of weapons, Callahan wants to make sure everybody gets involved.

“We’re very fortunate that it’s a position that has some depth to it,” Callahan said. “We have several guys that we feel are talented and have the ability to make plays for us. We use them all in slightly different types of situations, but they all have roles and they all contribute to what we’re doing on offense.”

Monmouth (2-0) hits the road next week for their first of four consecutive road games. They will travel to Albany, NY to take on the Albany Great Danes of the Colonial Athletic Association. Kickoff from Bob Ford Field on Saturday will be at 7 p.m.