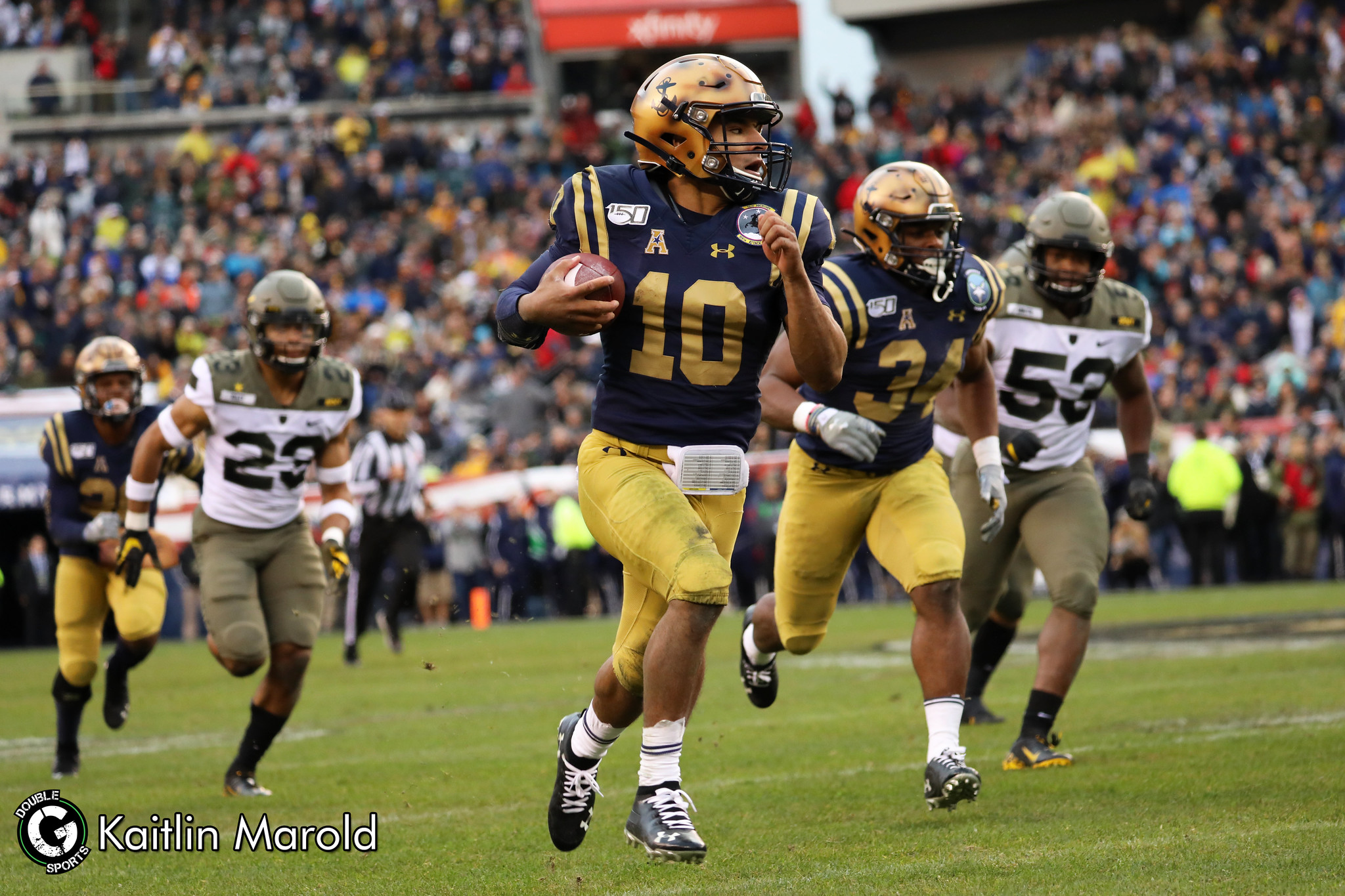 PHILADELPHIA: The 120th annual Army-Navy game returned to the city of brotherly love today for the 89th time. Army (5-8), was looking to extend its win streak to four straight vs. Navy (10-2). The President’s trophy and bragging rights were at stake. ESPN began the pre-game festivities hosting their iconic College Gameday segment at Xfinity Live!, located across the street from Lincoln Financial Field. The men and women of the Army and Navy were in full force turning the traditional event into quite the spectacle. Philadelphia Phillies new manager Joe Girardi and 1st-basemen Rhys Hoskins made an appearance to discuss America’s Game. College Gameday would conclude with celebrity guest picker, Sir Charles Barkley. Charles jokingly predicted “America” to win sending the men and women into a frenzy of cheers. Long-time host Lee Corso would naturally select Navy to win, as he coached the Midshipman defensive backs throughout the 1966-69’ seasons.

Army would tally the first and only scoring drive with just 27 seconds remaining in the 1st quarter. Quarterback Christian Anderson would take matters in his own hands as he ran for a 5-yard Touchdown, completing an 18-play 78-yard opening drive that lasted 10 minutes and 41 seconds. Unfortunately for the Black Knights that would be the last time they would find the back of the end-zone. Minutes later Navy would tie the game at the 13:34 mark of the 2nd quarter, courtesy of a dazzling 55-yard rushing touchdown by quarterback Malcolm Perry. He was just getting warmed up (more on Perry in a minute) .

The Black Knights thought they had Malcolm Perry…but he had other ideas.

WHAT A MOVE. TOUCHDOWN NAVY. pic.twitter.com/PlpjbpfV3G

With just six seconds remaining in the half and a chance to break the then 7-7 tie, Navy decided to visit their bag of tricks. They would run a trick play mimicking one made iconic by the Philadelphia Eagles during their Super Bowl 52 victory, fittingly in Philadelphia. Malcolm Perry would take the snap, fake the run, pitch it to wide-receiver Chance Warren who would find full-back Jamale Carothers in the back of the end-zone to give Navy the 14-7 lead.

As play resumed in the second half, Navy would take full control for the remainder of the game. Quarterback Malcolm Perry turned into Superman, shattering several records in the process. Full-back Jamale Carothers picked up his second touchdown on a 5-yard run to put Navy up 21-7 with 4:35 left in the 3rd quarter. With 12:48 to go in the 4th quarter, Kicker Bijon Nichols would successfully clear the up-rights on a 37-yard field-goal, increasing the Midshipmen’s lead to 24-7. The games final scoring drive was set-up courtesy a forced fumble by Navy’s DT J’arius Warren with just 4:59 in regulation. Three minutes later Malcolm Perry would yet again turn on the jets and rush past the Black Knights defense for a 15-yard touchdown. Navy would go on to defeat Army by a final score of 31-7.

Senior Quarterback Malcolm Perry made sure he did all it took to help his senior class reclaim the President’s Trophy by ending Army’s 3-year win streak. He would go above and beyond as he shattered former Navy tailback Eddie Meyers rushing record of 278 yards during the 1979 game. Perry would rush for a total of 305 yards. He also surpassed Meyers to become the all-time leading rusher in Army-Navy game history. Meyers tallied a total of 547 yards from 1979 through 1981 and Perry would post a total of 606 yards from 2017 to 2019. Perry also set the Navy single-season record for rushing yards, surpassing former Navy tailback legend, Napoleon McCallum (1981-85). His record of 1,587 yards had remained unbroken since 1983. Perry’s rushing record currently stands at 1,804 yards. It will be interesting to see how much he adds to that in his hometown of  Tennessee during the upcoming Liberty Bowl on New Years Eve.

What @NavyFB quarterback #MalcolmPerry had to say when asked how it felt to finally beat #ArmyFootball in his senior year. #ArmyNavy2019 @DoubleGSports pic.twitter.com/WRRbQGvfOJ

A look at what #NavyFB head coach Ken Niumatalolo had to say about his squads dominant performance in yesterday’s #ArmyNavyGame pic.twitter.com/QFwrxFu1Hk

The now 23rd ranked Midshipen will take on the unranked Kansas State Wildcats in the upcoming Liberty Bowl. Game will be played on Tuesday, December 31st, 3:45PM ET on ESPN at Liberty Bowl Memorial Stadium, in Memphis Tennessee.