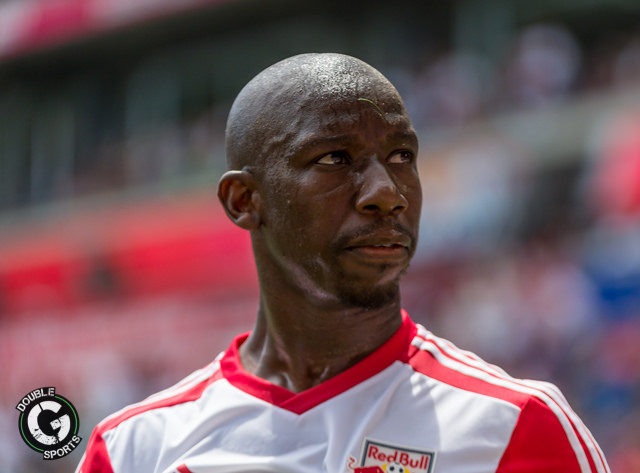 On a rainy afternoon in Washington, DC, the New York Red Bulls looked to rectify their dismal away record, winning only once on their travels. The two teams, boasting a rivalry that extends to the beginning of the league’s history, were set for a dramatic match which saw a massive weather delay, a two-goal lead for the Red Bulls, and that lead being unraveled, a normal for the 2016 New York Red Bulls.

Jesse Marsch, for the first time this season, put out an unchanged lineup for the encounter, leaving the same starters in after the team’s 3-1 win over the Montréal Impact. On the other side, Lloyd Sam made the start for DC United, marking the first time he played against his former team after being traded away in early July.

The match got underway with a few shots for each team, but just nine minutes after play began, lightning began to strike near RFK Stadium. Play stopped immediately, and per league rules, was only to begin again 30 minutes after the final strike of lightning. 75 minutes later, the match resumed on what was a waterlogged pitch. The ball rolled very slowly throughout a first half which saw water fly up every time a foot hit the grass. Both teams eventually found some sort of rhythm, with DC posting nine shots and New York having six.

The Red Bulls drew first blood in the 38th minute, a ball from Mike Grella found Bradley Wright-Phillips, who volleyed it past DC goalkeeper Bill Hamid for the go-ahead goal. The goal was Wright-Phillips’ 15th of the season, which puts him within one of the tied top goalscorers Sebastian Giovinco of Toronto FC and David Villa of New York City FC. The score stayed the same by the time the halftime whistle was blown, with the away team leading.

The teams came out to a drier pitch and a brighter sky for a second half that would prove to be more dramatic as the first. The Red Bulls managed another goal in the 64th minute, this time through Felipe. Goalscorer Wright-Phillips this time was part of the buildup, sending a ball into the heart of the penalty area from the endline. After the ball passed several players, it eventually found Felipe who just crossed into the area and shot the ball past Hamid.

Then became the familiar part of many Red Bulls away trips this season. Seven minutes later, Kemar Lawrence fouled Sam in the penalty area, winning the home team a penalty in the process. Marcelo Sarvas stood at the penalty area and easily slotted it to the right side of Luis Robles to bring the deficit to one goal. Just two minutes later, the score was level again after Taylor Kemp replaced Sam on the corner kick DC had won. The ball first found Steve Birnbaum, who redirected the ball towards a waiting Patrick Mullins, who scored the equalizer.

With more than 15 minutes on the clock, both teams searched for a winner. DC United head coach Ben Olsen made two attacking substitutions in Lamar Neagle and Kennedy Igboananike, after bringing in Nick De Leon. The Red Bulls, meanwhile, gave a debut to midfielder Daniel Royer shortly after the equalizer. Despite the efforts, neither team scored a third goal, and New York and DC recorded a point each.

The two teams finished with almost equal position, but DC boasting 22 shots, ten more than their opponents. For the sixth time this season, the Red Bulls relinquished another lead away from home, and still have just the one away win at New York City FC.

Following the match, Marsch responded to his lack of substitutions, as he left one substitute on the bench and only made a second substitute in stoppage time, bringing on Gonzalo Verón for Wright-Phillips. “It wasn’t a game for soccer, it was a brawl,” the coach said, remarking on the tone of the match.

Wright-Phillips discussed the troubles on the road post-match, saying “I just heard a stat from Jesse that it’s a potential 16 points lost. It makes me sick.”

The Red Bulls next host the New England Revolution at home on Sunday, August 28.