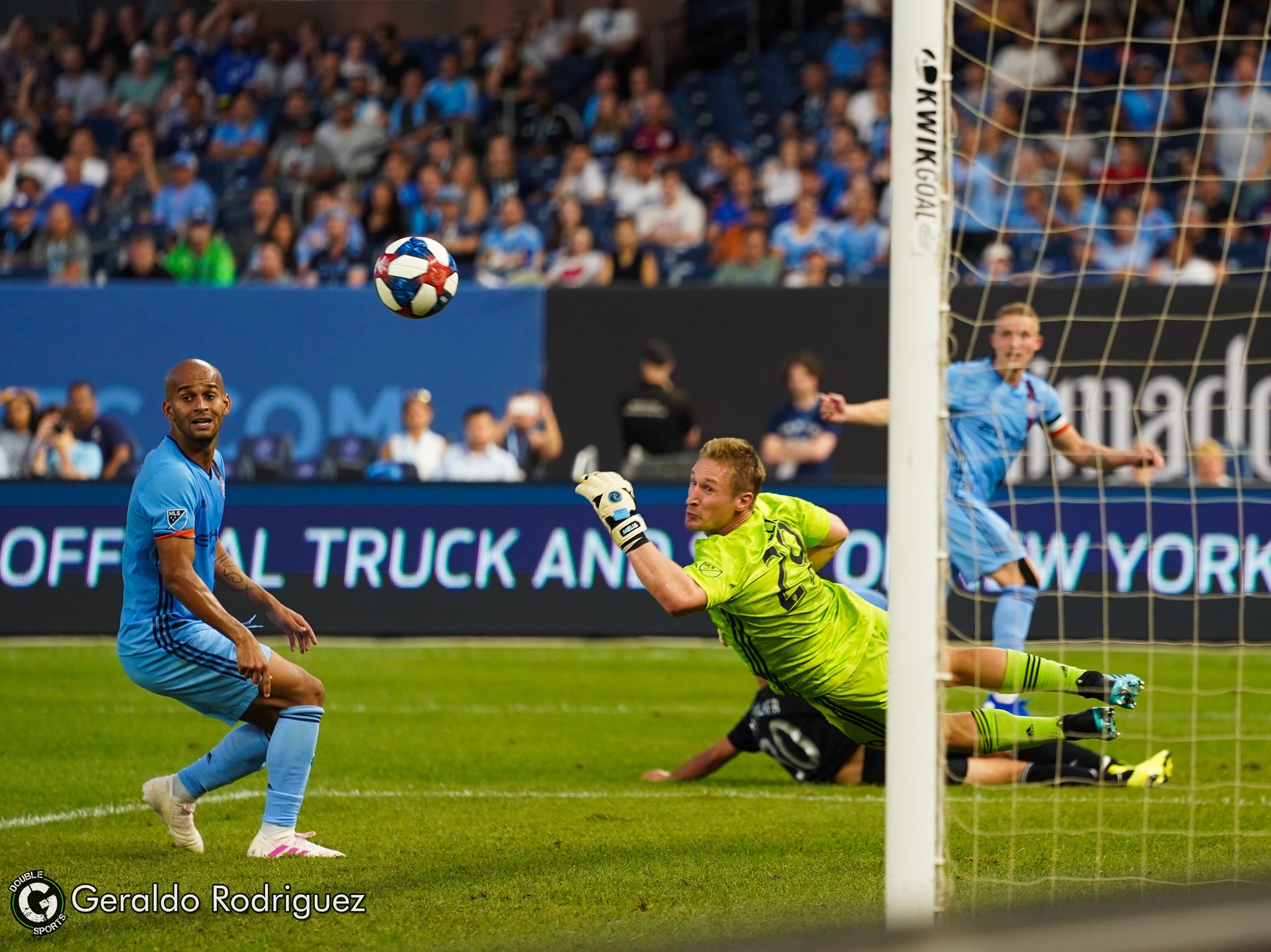 The starting 11 saw a couple of familiar faces back in the lineup with Maxine Chanot and Alex Ring who returned after the one-game suspension due to yellow card accumulation.

NYCFC started off great but the one who stole the show was Alexandru Mitriță. He didn’t delay as he pushed up the momentum for the blues.

Mitriță exploded on the field and even had the ball in the net in the 12th minute, but unfortunately it was ruled offsides so the goal was discounted.

Sporting KC wasn’t falling behind the blues as they took some close shots and gave Goalie Johnson a run for his money.

The hunt for the lead continued and Sporting Kansas City almost had it on 34’. Maxi Moralez, attacked with the second shot on goal and he was the one who headed a Ronald Matarrita cross towards goal, but Tim Melia came up with a brilliant one-handed save to tip it over.

The blues finally found the back of the net for the lead in the 41st minute, thanks to Anton Tinnerholm. The goal was a perfect cross from Ring for Anton to tap in at the back post for his first goal of the season.

The boys in blue secured the lead before the half-time whistle blew and went to the half with a sigh of relief.

The second half of the match was equally as intense as the first, as NYCFC came out of the locker room looking to further their advantage and close the game in a grand way.

NYCFC scores in the 54th minute courtesy of Héber, the team’s lead-scorer, who broke out his signature celebration after the Ringleader passed the ball through SKC defenders to find him.

Our Brazilian No. 9 led the charge, beating Melia to double the lead with his ninth goal of the season, also becoming the first NYCFC player to score in five consecutive MLS games.

Unfortunately in the 73rd minute, Ilie Sanchez got a goal past the ‘keeper to put themselves on the board, 2-1.

NYCFC didn’t let that get their spirits low and in the 77th minute Gary Mackay-Steven, who came in as a sub, set Ring up to strike the ball from outside the box for his third goal of the season.

That’s how the guys concluded a second consecutive victorious match under their belt. And Tinnerholm seemed confident and positive looking forward for the next games for the Blues.

“We had a tough week when we had three straight losses, it was a really tough week mentally, but we’re strong and we bounced back. We got a win against Colorado and again today, in the second half we showed that we’re a really good team. We know that we’re gonna lose some games throughout the season, but it’s all about bouncing back as soon as possible. Now we’re back on a winning streak and we’re looking forward to the Saturday game against Salt Lake.”