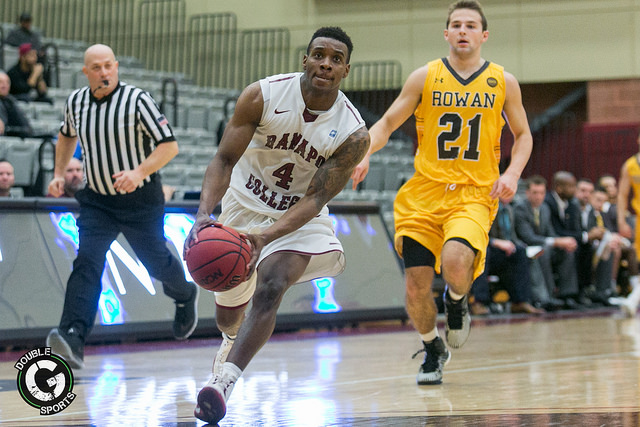 Watching Rowan end the first half on a 10-0 run to go up 50-47 at halftime in the NJAC Tournament Semifinal at the Bradley Center Wednesday night, the Ramapo College Roadrunners found themselves trailing for the first time at intermission against the Profs. In the previous two match-ups, the Roadrunners held the advantage.

Senior forward Sultan Aminu (20 points, nine rebounds) held the mentality it’s his last year and did not want to lose.

Junior forward Christopher Moseley who led a contingent of six players in double figures with a game-high 24 points and 10 rebounds on the talk in the locker room at intermission, “Coming out of halftime we knew we had to play our game and in first half playing their game too much and in second half got to play Ramapo basketball by getting rebounds and to the rack.”

The Roadrunners came out a motivated bunch relentlessly crashing the glass and were rewarded with trips to the charity stripe line. With the game tied at 57-57 four minutes into the second half, Ramapo fed off the energy of two bench players in junior forward Nick Stanek (16 points) and freshman guard Patrick Peterson (18 points). Peterson netted six points in 19 seconds leading to a 10-0 spurt.

Ramapo owned the space underneath the basket, out rebounding Rowan in the game (55-33) and leading to second chance opportunities. The Roadrunners built a comfortable cushion to 93-74 with less than six minutes left with the Profs coming unglued as two technical fouls were assessed. Just when victory was in the bag, Rowan fought back with a series of runs shrinking the gap to 95-85 with 2:36 remaining. The Profs were sizzling from beyond the arc connecting on 17 of 45 shot attempts.

A trifecta from Profs sophomore guard Nick DePersia (22 points) with 1:01 sliced the Roadrunners lead down to 101-95. However, Ramapo(24-2) squashed the rally sinking 6 of 8 free throws to secure the 110-101 victory. Junior forward Thomas Bonacum chipped in with 16 points while junior guard Josh Ford added 11 points.

“We talk about winning by any means necessary and didn’t guard tonight by letting up 50 points in the first half and 10-0 run to end the half,” Head Coach Chuck McBreen said. “We use the word finish but didn’t in the first half. I’m disappointed from the standpoint we got up by 19 with five minutes to go and this should not have got down to six points and have to sweat it out. We got scared at the end and turned the ball over six times in 7 or 8 trips.”

“If we did the basics by making free throws, scoring and blocking out this is about a 20 something blowout. We went to the line 65 times and shouldn’t have been close as they went to the line 19 times. I’m happy for them we’re in the final but disappointed with the way we ended the first and second half.”

“Coming into the locker room at halftime we weren’t ready to play, Nick (Stanek) came out in the second half and gave us some real good energy and Pat Peterson as well. We were down in bench points 18 to 1 at halftime and made a mention of that. In the first 2 games we dominated the boards and knew it would be a good factor we at the end of the day we won the second chance points 25 to 11 and points in the paint 42-30.”

“We saw what we had to and exploiting Rowan’s weaknesses by boxing out and getting defensive rebounds,” said Moseley. “The bench was great despite getting off to a slow start in the first half and picked it up in the second half when we really needed it.”

“We have been working on our free throws because we missed a lot of them this season but at the end came away with the win. The crowd was great tonight getting the other team frustrated with two technical and helped us get hyped up and whenever we made a good play right behind us the whole way.”

“Coach wanted us to get on the boards and I set the tone for the night in the first half by scoring,” Aminu said. “We have a bunch of guys who can go off on any night and makes our team so good. Good teams find a way to win and we’re a good team.”

Ramapo will tangle with New Jersey City University in the NJAC Championship Game on Friday night at the Bradley Center with tip-off set for 7:00 p.m. The two teams’ split the regular season series as the Gothic Knights ended the Roadrunners school record breaking 14 game-winning streak on January 14 and 11 days ago Ramapo clinched the NJAC regular season title with a 78-70 win at the Bradley Center.

“We’re excited about that and why we worked to have home court throughout and important for us,” McBreen explained. “New Jersey City is a very good team and picked to win the league this year by coaches in NJAC. We have a tough opponent on Friday and hopefully can clean this up.”

“We’re feeling confident and can’t wait for the game,” Moseley said. “We have been waiting for this for a long time and first playoff win since I have been here and ready to make a statement.”

“On Friday night we have to play some defense,” Aminu said. “A great feeling for us, the community and Ramapo College.”

Is there life left in UConn?
Seton Hall Adds To NCAA Tournament Resume After Hard Fought Win Over Xavier
Posting....