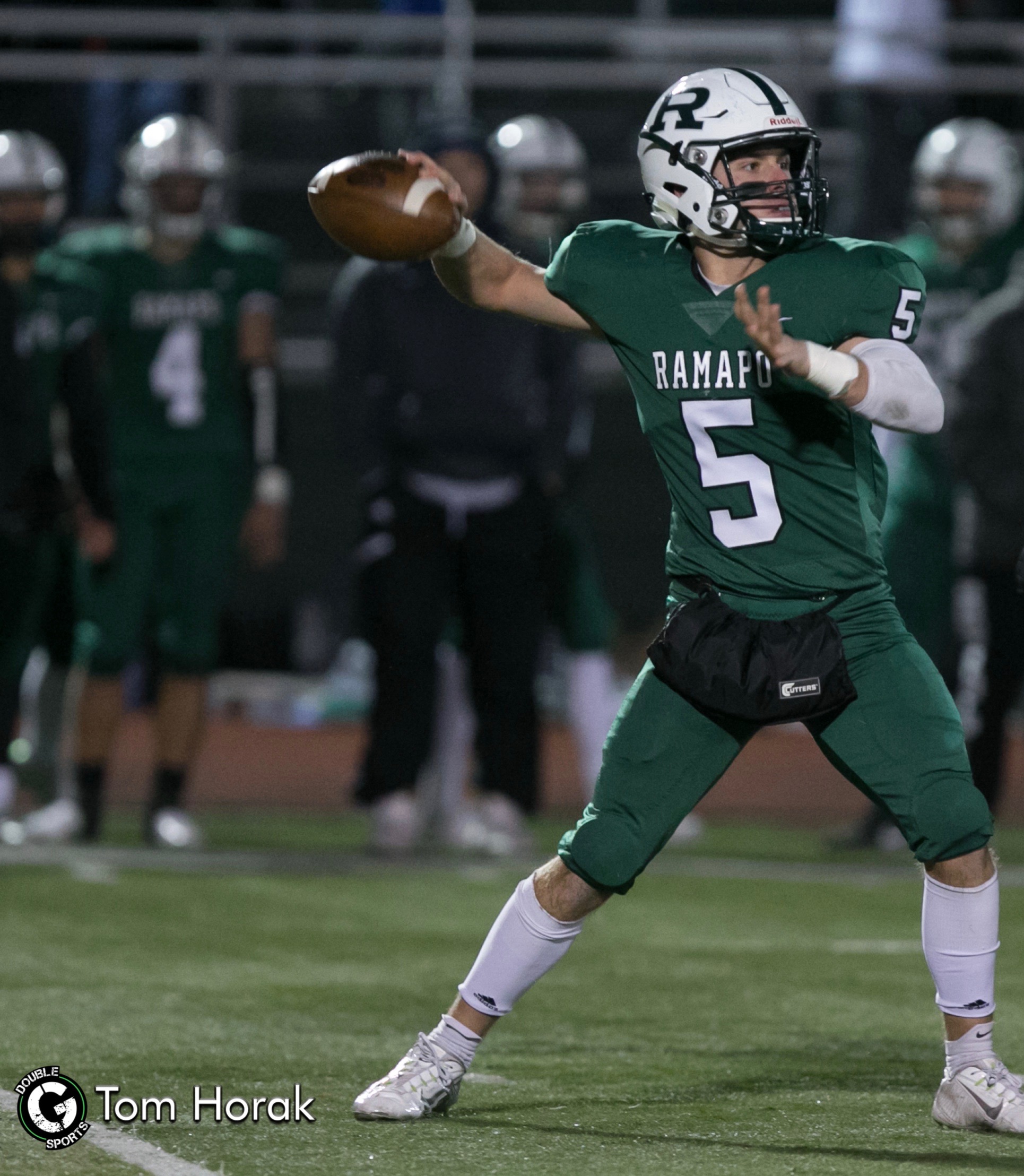 Ramapo quarterback AJ Wingfield remembers the days of playing football with teammates Isaiah Savitt and Tommy Pernetti since second grade. Wingfield said they would play against Max Baker and Anthony Sargenti and had an inclination they would eventually meet up again.

“Funny thing was we did not want to go to a private school and stuck together going to Ramapo,” said Wingfield. “A ton of respect for private kids and got studs everywhere. It goes to show you how kids from Franklin Lakes, Wyckoff, and Oakland stuck together and bought in and how special a group can be.”

Despite not getting much playing time in his two years on the Green Raiders squad, Wingfield learned from two other star quarterbacks in Keith Woetzel and Tom Jaten. “A ton of great quarterbacks, when I was a freshman Keith was here and kind of molded my game after him,” Wingfield said. “Tom and I were really close, he took me under his wing and taught me a lot of mental things. Both of them helped me become the player I am.”

The keys were finally handed to Wingfield in 2017 and he did not disappoint leading Ramapo to a 9-3 record while throwing for 1,410 yards and 10 touchdowns and rushing for 962 yards and 18 touchdowns. However, the Green Raiders lost to River Dell in the North 1, Group 3 sectional title game at Met Life Stadium 28-7 that left a bitter taste with Wingfield.

“We didn’t finish 2017 the way we wanted to and River Dell had a really good plan and got to us. Leaving the field I felt terrible for the seniors and going into my senior year I felt I could not have feeling again for my senior teammates.”

Preparing for the 2018 season, Wingfield said the main motivation was to get back to Met Life Stadium and win it. Not proud just to make it but the goal and to get it. On September 28 at home against River Dell, Ramapo trailed by 15 points in the fourth quarter. With the odds stacked against the Green Raiders, Wingfield rallied his team firing two touchdowns in the final 5:19 and threw the game winning touchdown pass to Savitt for the dramatic 42-35 victory. Wingfield ended up throwing for 361 yards and five touchdowns.

“That was the turning point of the season,” said Wingfield. “They are always tough and have these schemes. We know each other so well and when we came back it showed them when we turn on we’re pretty unstoppable. Two top teams that always have respect for each other, no trash talking, two great coaches, big student sections and crowds.”

Ramapo rolled through the regular season averaging just around 35 points per game. Wingfield put up incredible numbers registering at least three touchdowns passing and rushing touchdowns in 11 of the 12 Green Raiders games played. In the state playoffs Wingfield accounted for nine touchdowns including three against River Dell in the sectional title game as Ramapo became the second team in program history to finish 12-0, first state title since 2015 and 11th sectional title.

Looking to complete an undefeated season the Green Raiders faced off against Summit in the North Group 3 Bowl Championship Game at Met Life Stadium. Wingfield shined once again throwing for 281 yards and five touchdown and in the process breaking Sean Dougherty’s single season of record back in 2013 which was 30 finishing up with 33. Standing at 5’11 did not deter Wingfield passing for nearly 2,600 yards and rushing for 557 yards and nine touchdowns and earning him First-Team All-North Jersey, First-Team All-Bergen County Team and USA TODAY NETWORK All-New Jersey Offense Team and NJ.com Offense Player of the Year.

“Football has shifted to smaller quarterbacks and people started to open their eyes and see you don’t necessarily have to be 6’3 to throw a ball and I’m not into that huge height and don’t think it matters and just have to find a way to make plays.  I really worked hard to transform my body and get a lot faster and stronger Coach (Drew) Gibbs was able to maximize my legs as well as my arm and had such a good running back in Luke (Ragone) and opened up a lot of holes for me.”

“Coach Gibbs offense sets me up very well and dual threat is a huge advantage in the spread offense and being a QB that can put a ton of pressure on the defense. He was right there by my side and helped me become a much better player. He is the reason we went 13-0 this season, his play calling and attitude in practices every day and think he is the best coach in the state of New Jersey.”

“It’s kind of starting to soak in the season is over with, looking back I miss it a lot and remember walking off the field with my best friends and how close our team was. We still text each other all the time and it’s kind of crazy to think what we did, how we did it and means a lot to Ramapo and supporters. It’s really special to be in the Ramapo and New Jersey history books.”

The next stop for Wingfield is Ithaca College where he will continue to play on the gridiron. The Bombers went 8-3 during the 2018 regular season. “It really checked off all the boxes for me, I was looking for a good school academically with a good football program and socially fit for me. A newer coaching staff that has been there for two years and starting to build their own program and new recruiting classes and think future is finally bright.”

Wingfield is not done playing sports with baseball right around the corner and graduation in June. “Playing since I was born and love it. Playing shortstop and third base helped me play football and with my arm angles.”

Knowing he could not do without the support from the school administration especially athletic director Ron Anello, Raider Nation and family this is what Wingfield had to say.

“I have known Mr. Anello since I was very young and helped me in reaching out to schools for me. From the superintendent to the principal and everyone down has been so supportive at each game and on the sidelines and talking about the team in announcements in the morning.”

“On Raider Nation, They made a Twitter account and couple of seniors run it. They were a big part of it as anyone and starting from Monday they would research the other team and try to find other stuff on other players and gave us extra motivation and showed they really bought in and tried to go and play for them.”

“My family means a lot to me and having my brother Matt on the team through our ups and downs. We live right behind the school and my parents both went to Ramapo and Mom is in the Hall of Fame and Dad played football. They have been through it and any problem that came up and knew how to solve it.”

Wingfield says the future is very bright for Ramapo football considering the way the team performed in 2018. “We’re not the most athletic kids out there but what separated us is how hard we worked in practice and our game plans were off the charts. Some of the younger kids reached out to me during the season and loved that stuff. There are some really talented players in the system.”