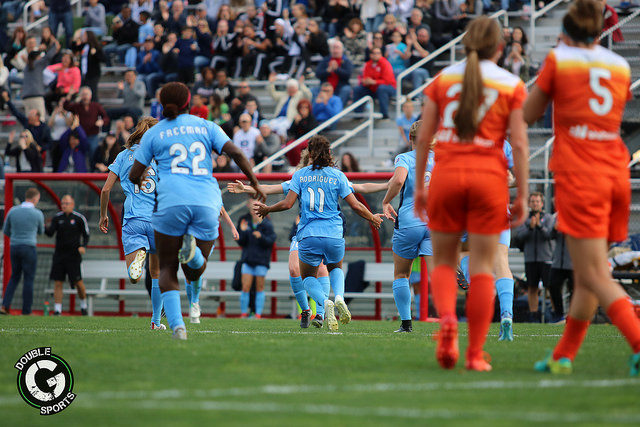 Sky Blue FC returned home yesterday to earn three points against the Houston Dash. Raquel Rodriguez’ late goal at the 85th minute came at the right time, to give the locals their hard fought win on what was likely going to end in a draw, as coach Christy Holly describes it. “The attitude, the application to get through and turn what should have been a draw, maybe a lost into a win, is something that is different of this team from last years.”

It was a beautiful day for soccer. Sky Blue FC was feeling the pressure after winning 3-1 against a visiting Houston Dash that had just conceded them 3 points last weekend. Except the locals never liked to make it easy for their opponents at Yurcak Field. “We have been stressing the importance of establishing a winning culture at home,” said Sky Blue FC head coach, Christy Holly. “We want to make Yurcak Field a very difficult place for our opponents to come play. With the attitude and ability that this team compiles together, we are very excited about what we can do over the remainder of the season for our fans.”

From Dream to Realization

It was a dream-come-true kind of night for Costa Rican, Raquel Rodriguez. Lifetime’s Player Profile, which was livestreamed nationwide previous to the game, was a feature of her childhood and her path to become a professional soccer player for the NWSL.

Rodriguez played a key role on the first Sky Blue FC goal, and it was Rodriguez herself that puts the ball in the net on the late goal that earned her team the win. “It’s important to win back to back, and it’s also important for the team. It sets our standards and we are here to compete.” said Rodriguez on a post-game interview.

With 6 weeks into the season, the O’Hara-Kerr-Rodriguez trio was prominent on the field against the Dash. We continue to see their chemistry there, and this time it was no exception.

The game started at a slow but steady pace for both teams. However, at the 20th minute Sky Blue FC’s Sarah Killion opened the score off a penalty shot. The play started in the midfield where Kelley O’Hara finds Sam Kerr on the right, Kerr ran the ball into the right side of the area, cutting it into the center of the box, where Raquel Rodriguez gets fouled by Houston’s Amber Brooks. The referee called the penalty shot without hesitation.

The game remained even most of the first half, both teams were attacking and we only saw a couple of dangerous plays. A response from the visiting team came at the 40th minute from Houston’s Andressinha, who after hitting the post, gets the second ball herself and nets it in. Halftime score was 1-1.

Sky Blue came stronger on the second half. They generated more offensive plays than Houston and all that paid off at the 85th minute, after Leah Galton was fouled by Dash’s Rachel Daly. Daphne Corboz took the free kick, which ended on a loose ball that Rodriguez was able to finish, leaving Sky Blue up 2-1 and leaving the 3 points at home.

It is going to be an interesting week 7 coming up for Sky Blue on Wednesday, when they face the standing’s leaders NC Courage on an away game. Kickoff time is 7:30pm ET. The game will be livestreamed on the go90 app.