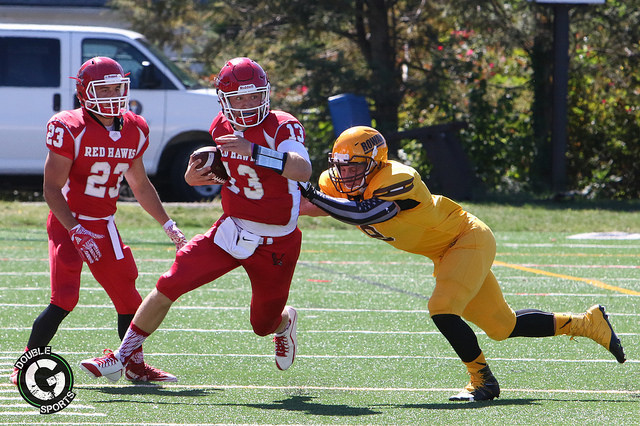 The Montclair State Red Hawks started off a right foot by jumping out to a 14-6 lead over Wesley but two scores including one with 24 seconds left in the first half put the Wolverines ahead 20-14 at halftime. Wesley would tack on 17 second half points to pull away as the Red Hawks dropped back to the .500 mark at 4-4 and 3-4 in the NJAC.

“I thought we played well against a very good team and hard in a game that certainly had several swings of momentum back and forth,” Head Coach Rick Giancola said. “That’s how the game probably went through three full quarters and clock became out enemy more and more and we tried to do a little more in the passing game and didn’t work out.”

Down 6-0 in the first quarter, sophomore quarterback John Apicella tossed a 28-yard touchdown pass to junior wide receiver Julanee Prince( 4 catches for 54 yards). In the second quarter, senior running back John DiStefano extended the margin with an 11-yard rushing score. For the seventh time in eight games DiStefano rushed for more than 100 yards carrying the ball 29 times for 143 yards.

“John is an outstanding back and he is capable every time he touches the ball and makes something positive happen,” Giancola said. “Sometimes our lineman don’t know where he is not there and ends up somewhere else.”

“Julanee likes the ball going away, up the field and down the middle deep and John knows that,” Giancola said. “What Julanee brings is a unique ability to adjust to the football and when it’s up in the air and battling for the ball and comes away with it. He maneuvers his way to the football where he can catch it and get away from the defender. John gets the ball to him where Julanee has a shot at the ball and those two have only been playing a half a season right now and time is well ahead for them to get this going and better.”

“We’re happy to have Michael back and was injured earlier in the year and didn’t get a lot of game time because he was still nursing the injury,” said Giancola. “With him back on the field it gives us some maneuverability and those two sacks came on direct blitzes called for him and they didn’t pick him up.”

This upcoming Saturday the Red Hawks return to Sprague Field for the home finale of the 2016 regular season and face a stiff test against the top team in the NJAC in Frostburg State University. The Bobcats record stands at 7-1 overall and 6-1 in the NJAC.

“We’re 4-4 and certainly disappointed with that,” Giancola said. “It’s been a very frustrating season being so close in some instances and lack of maturity that our club has show against some of the better clubs and haven’t been able to complete the task.”

“Frostburg State is a good club and has talent. Hoping we can line up and play without major errors so we can hopefully control the tempo at the line of scrimmage because that’s the difference in any football game. If you can command the line of scrimmage, you got an opportunity and chance to win the game and have done that against the three best teams’ but only came away with one win.”

The majority of the team will return next season but for seniors John DiStefano, Joe Falato and a couple of other players this will be last game at Sprague Field on Saturday at 1:00 p.m.

“I’m always partial to our seniors and feel when you become a senior it’s an honor and you have played through all the thick and thin,” Giancola said. “Whatever a season gives you for four years  and proud of these guys and really am. It’s not easy to through tough times and the seniors have high expectations for their last season. I’m hoping we can give them something very positive in their last home game and hopefully week after that. I love these guys and seniors are really special.”

Yale Capitalizes Off Columbia’s Turnovers For The Win
Career of William Paterson’s Versatile Star, Anthony DiMarsico, Coming to an End