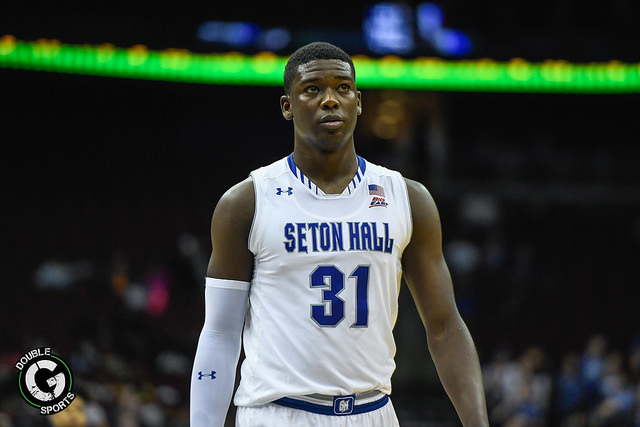 The biggest stretch of the Seton Hall season started on Wednesday as Providence came to Newark. At 4-6 in Big East play, the Pirates have five of their final eight games at the Prudential Center with three of these games against the worst of the conference. For the Pirates to even consider a return to the NCAA Tournament, they must make a solid run through these final games and make some noise in Big East Tournament at MSG.

In a game that felt like a must-win, Seton Hall played one of their better games of the season defeating Providence 72-70 in overtime. Freshman Myles Powell hit the game winning shot with 7.2 seconds left in overtime as the Pirates moved to 5-6 in the Big East. Angel Delgado had his 18th double-double of the season as he scored 19 points and grabbed 15 rebounds.

The game started as bad as possible for Seton Hall as they fell behind 27-12 in the first half as the Friars went on a 22-3 run. Seton Hall was able to cut the lead to five points at halftime as Seton Hall outscored Providence 24-14 to end the first 20 minutes of action.

The second half saw the lead go between both teams as gravity of the game was not lost on both teams. Providence (14-11, 4-8 Big East) is also fighting to stay afloat going into the Big East Tournament in March. One thing that was noticeable about Wednesday’s game was the defense of Seton Hall as down the stretch the Pirates forced an important shot clock violation on Providence’s final possession of regulation.

Overtime was back and forth as well as Providence jumped out to a three point lead midway through the extra period. A Delgado lay-up and a Khadeen Carrington three-pointer gave The Hall the lead. After two more possessions from both teams, Powell hit the game winning basket after driving inside to give the Pirates the W.

Carrington finished with 21 points, his ninth 20-point game of the season, along with seven rebounds and five assists. Providence was led by Rodney Bullock who finished with 19 points, but the Friars were held to 30 percent shooting in the 2nd half of the game.

Wednesday’s game came on the heels of Seton Hall announcing that Jevon Thomas left the program. Thomas was the third Pirate player to leave the program after Veer Singh and Myles Carter left in December. The departure of Thomas, while his playing time was inconsequential, makes the point guard situation dicey in this final month of the regular season.

Seton Hall returns to action Saturday against St. John’s (11-14, 5-7 Big East) at Madison Square Garden. Game time is 12 noon and will be a nationally televised game on CBS Sports Network.