The Somerset Patriots clinched a championship in the Somerset Professional Baseball Series on Thursday with a victory over the New Jersey Blasters. They were presented with the Joe Torre Championship Trophy before Saturday’s game and celebrated in the dugout with their well-earned hardware. Torre, an MLB Hall of Fame player and executive, congratulated the Patriots with a virtual speech on the scoreboard.

In the 13-game two-team series, the Patriots finished on a high note with seven wins in a row, besting the Blasters by a record of 9-4.

Postseason awards were handed out on Saturday as well, including the Willie Randolph MVP Award and Sparky Lyle Pitching Award.

Blasters infielder Martin Figueroa won the MVP award for the series by Yankees legend Willie Randolph, the namesake of the honor. Figueroa had a tremendous series at the plate, batting .323 with four doubles in 11 games. 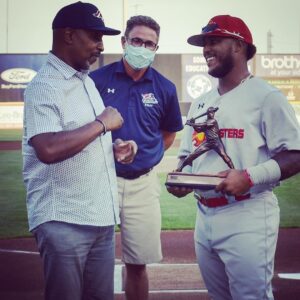 “It means a lot. The competition is very great,” Figueroa told me. “It’s just awesome to get the experience here, showcase myself and get the opportunity to be out here playing.”

Patriots relief pitcher James Pugliese received the Sparky Lyle Pitching Award, given to the series’ best pitcher, for his 1.13 ERA and one run allowed over seven outings. 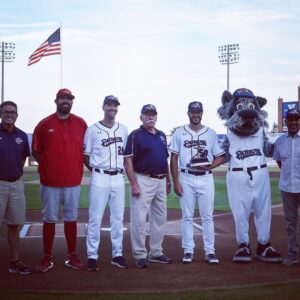 Highlights of the series included a socially distanced walk-off by the Patriots in the second game, as well as the uplifting story of Brandon Leibrandt. After a career-derailing injury, Leibrandt came to Somerset to prove he could perform at a high level.

In his three starts with the New Jersey Blasters, the southpaw posted a league-leading ERA of 0.75 along with 15 strikeouts. On August 6, he signed with the Miami Marlins. Just two weeks later, on August 13, Leibrandt was promoted to the major leagues by the Marlins. Saturday he made his major league debut with three shutout innings against the reigning champion Washington Nationals.

The Somerset Professional Baseball Series at TD Bank Ballpark was one of only 18 locations where pro baseball took place in 2020. The series provided the community with baseball in New Jersey and gave many the opportunity few fans experience in this chaotic year by heading to the ballpark.