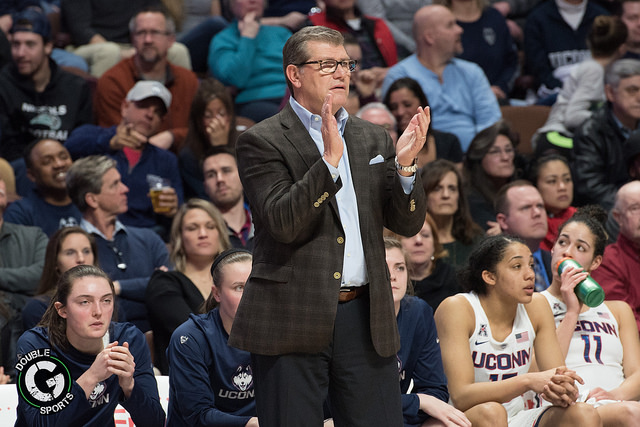 Ranked a second seed for just the fifth time in program history and first time since 2006, the UConn Lady Huskies(32-2) first round opponent in the 2019 NCAA Tournament were the Towson Tigers(20-13), a team making their first appearance in the tournament while the Lady Huskies were competing in their 31ststraight tournament.

UConn did not waste anytime racing out to a commanding lead, leading 13-2 not even five minutes into the first quarter and up by 20 at the three-minute mark. When the first quarter ended, the Lady Huskies held a 31-7 advantage with Collier totaling 12 points. UConn shot a sizzling 64 percent from the perimeter and 57 percent from beyond the arc.

In the second quarter, the Lady Huskies continued to pour it one canning three more triples. By the time Crystal Dangerfield buried a trey at the five-minute mark, UConn hit 7 of 11 three’s. When both teams’ hit the locker room, the Lady Huskies held a commanding lead at 64-24, shooting a scalding 69 percent from the outside and three-point lane. Defensively, UConn did a masterful job limiting Towson to 31 percent shooting. Collier had tallied 18 of her game high 23 points, Christyn Williams 15 of her 21 points and Dangerfield adding 14 of her 20 points.

Not stepping off the gas pedal in the second half, the Lady Huskies led by 46 at the end of the third quarter and eventually cruised to the 110-61 win. This was the fourth time the team had scored 100 points in the first round of the tournament. Megan Walker chipped in with 16 points and Katie Lou Samuelson contributed 11 points. UConn finished shooting 58 percent from the perimeter, sinking 15 of 29 three’s and knocking down 13 of 17 from the charity stripe line.

Next up for the Lady Huskies is a second round match-up against Buffalo(24-9) on Sunday afternoon at Gampel Pavilion.