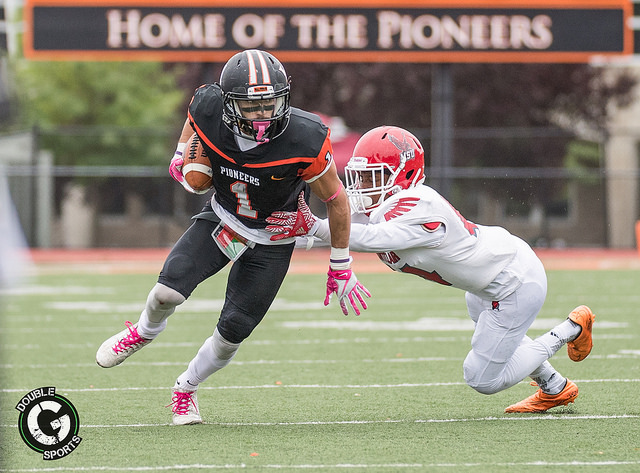 Turnovers continued to be costly for the William Paterson Pioneers last Saturday at The College of the New Jersey. The Pioneers turned the ball over four times including three fumbles as the Lions won their first game of the season 42-28 and sent William Paterson (2-6, 1-6 NJAC) to their 4th consecutive loss.

“The guys played hard and with a lot of effort and to be honest when you look at Waldron’s stats you think we won but we turned the ball over too much and that’s been the theme the past few weeks,” Head Coach Jerry Flora said. “You just can’t turn the ball over and expect to win football games and really what it is coming down to and consistent thing.”

The Pioneers fell behind 14-0 in the second quarter but junior quarterback James Waldron connected with senior wide receiver Anthony DiMarsico on a 57-yard touchdown pass with 2:23 remaining. However, TCNJ scored with only six seconds left to take a 21-7 lead into the locker room.

DiMarsico had a spectacular game hauling in 7 catches for 124 yards to go along with two scores.

One minute into the second half, it was senior wide Malcolm Robinson’s turn, catching a 21-yard scoring pass from Waldron cutting the lead to 21-14. The Lions scored twice later in the quarter to take a commanding 35-14 advantage.

Robinson had a spectacular day reeling in six catches for 161 yards and two scores. Waldron put up impressive numbers completing 21 of 32 passes for 389 yards, four touchdowns and one interception.

“Anthony and Malcolm played great and Anthony was consistent with his route running, catching and blocking was really good,” said Flora. “Defensively I thought we played hard on defense and gave it all they got and you can’t ask for anymore.”

Next up for the Pioneers is the final home game of the 2016 regular season against Christopher Newport (5-3, 4-3 NJAC) at Wightman Stadium on Saturday at 1:00 p.m. Last season the Captains won 42-30. 12 seniors will step on the field for the last time.

“It’s always emotional when you graduate kids in your program and a couple of them have been with me for four years and one five and it’s interesting when they first came here they were boys and now men,” Flora said. “It’s hard to believe four years have gone by and they have given us all we can ask for and at the end of the day their leadership has been good, working hard and coming to work every day.”

“Even after the loss on Saturday everyone came into the weight room on Monday getting ready to go,” he continued. “We had really good practices, guys are focused and trying to finish strong. A lot of people don’t seem to see beating Montclair was the biggest win for this program in 27 years and played lights out. We didn’t turn the ball over and played a perfect football game.”

Career of William Paterson’s Versatile Star, Anthony DiMarsico, Coming to an End
Despite Disappointing Season for William Paterson, LB Charles Faulkner Excels On and Off the Field