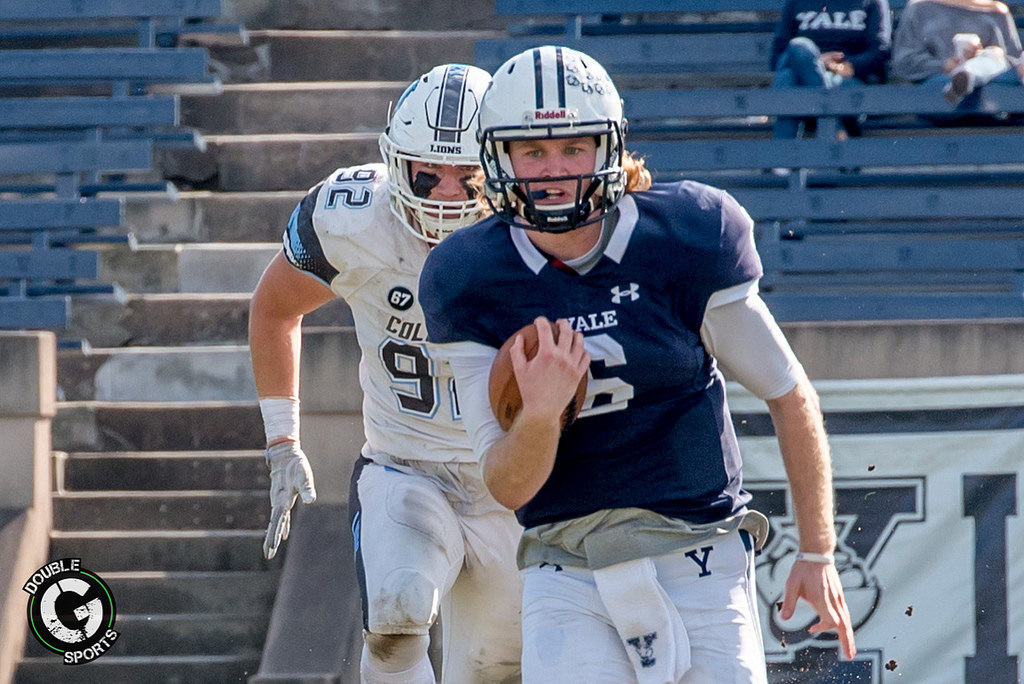 Yale is currently deadlocked at the top of the Ivy League standings with Columbia and Cornell.

The Yale Bulldogs are on a roll after they defeated previously unbeaten Columbia 23-6 at the Yale Bowl. The key win for Coach Tony Reno’s Bulldogs improved their record to 6-1 (3-1 Ivy) while Coach Al Bagnoli’s surprising Lions fell to 6-1 (3-1).

The Bulldogs are currently deadlocked at the top of the standings with Columbia and Cornell.

Yale’s defense was the story in this one as they had four sacks and two interceptions in limiting the Lions to just 206 yards of total offense.

Yale quarterback Kurt Rawlings threw for one touchdown and ran for another while freshman phenom Zane Dudek rushed for 173 yards and caught four passes.

Yale will host the Brown Bears 2-5 (0-4) in a potential trap game Friday evening at the Yale Bowl. Brown is struggling having lost four straight games, including last week’s 17-7 loss at home against the Penn Quakers.

Tonight’s game between the Bulldogs and Bears will mark the 122nd meeting between the two schools. Yale leads the series 81-35-5. Last year Brown defeated Yale 27-22 in Providence.

The game will be broadcast on the NBC Sports Network(8:00 p.m.) and air on the Yale Football Radio Network (ESPN Radio AM-1300 in New Haven). Ron Vaccaro and Carm Cozza have the call on radio.

The Bulldogs are on the road to the 2017 Ivy title. There will be no trap game this weekend for a Yale squad that is looking like an Ivy League champion….

Next week: Yale at Princeton in an Ivy League showdown, November 11 for a 1 p.m. kickoff.

Ten of Zane Dudek’s 25 carries last Saturday against Columbia went for first downs as the freshman rushed for a season-best 173-yards. The effort earned the first-year phenom National Rookie of the Week as well as offensive player and co-rookie of the week in the Ivy League.

Dudek, who ranks second among all Football Championship Subdivision ball carriers (8.4 yards per attempt), was placed on the FCS Jerry Rice Award Watch List. The freshman owns the Yale freshman record (9) for touchdowns and has been Ivy Rookie of the Week three times while having four games where he rushed for over 100 yards.

Harvard freshman quarterback, Jake Smith, had quite a game in the Crimson’s 25-22 comeback win over Dartmouth. Smith was 18-for-35 for 125 yards and three TDs. He also rushed for 64 yards.

Yale’s senior linebacker and Double G local standout Matthew Oplinger (Summit, NJ) leads the FCS averaging better than one per game and has 9.5 on the year.

Dartmouth’s upcoming matchup with Brown on Friday, Nov. 10, will be held in historic Fenway Park.

Looking way ahead to a game that is looking more and more like it will determine the Ivy League football champion, Yale will host Harvard in THE GAME on Nov. 18.