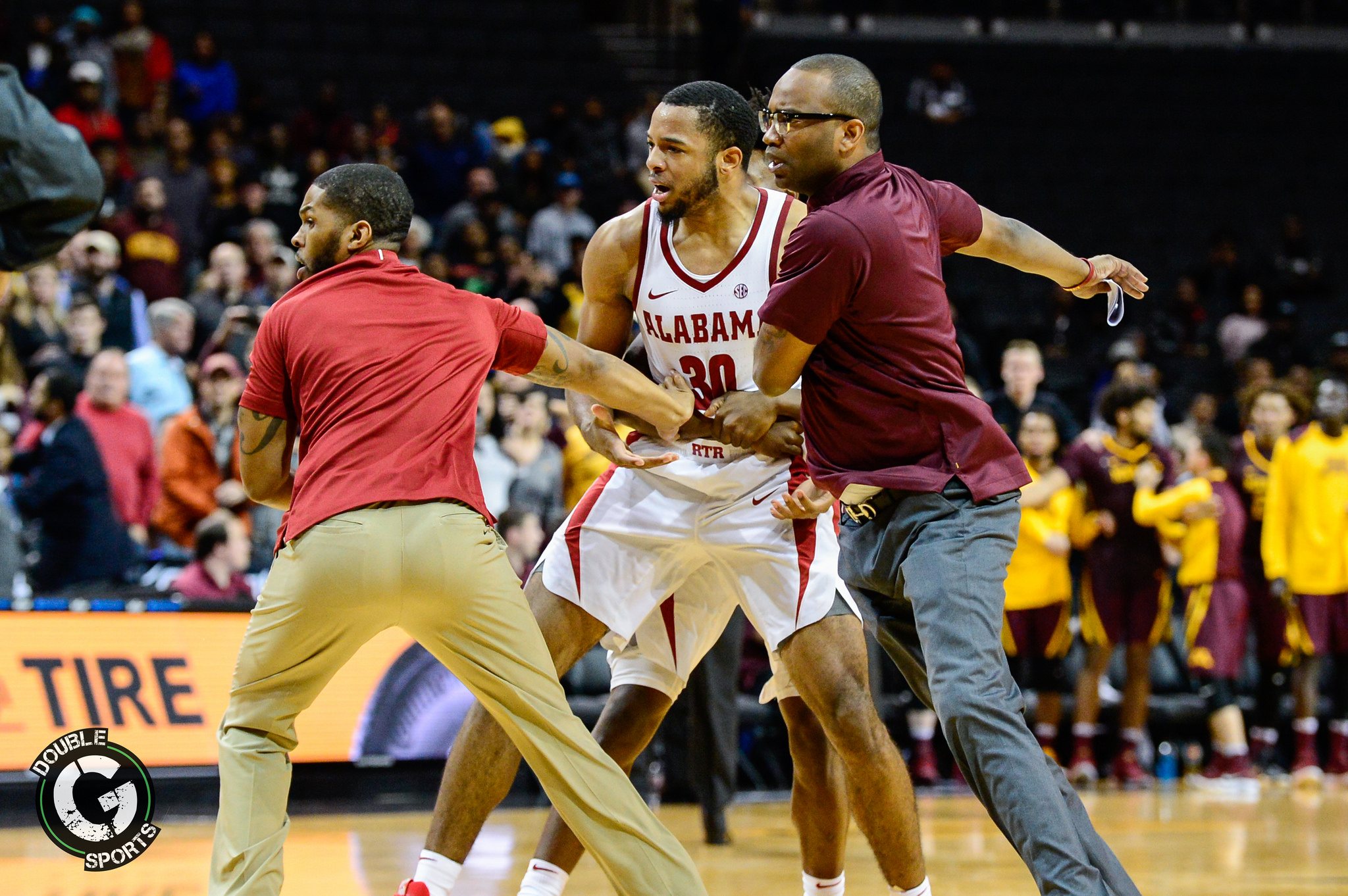 Electricity flowed through Brooklyn during Day Two of the Barclays Center Classic.

Saturday’s games featured UMass vs. BYU and Alabama vs. Minnesota. While most of the attention has gone to the PK80 Tournament and other non-conference matchups, all four teams in Brooklyn have focused on these resume-building games. Let’s look at three takeaways from Day Two of the Barclays Center Classic.

The Minnesota/Alabama game became chippy in the second half as there were technical fouls on both sides. A scrum ensued midway through the half that saw all but five Alabama players ejected for leaving the bench area. At the 11:37 mark of the second half, Dazon Ingram picked up his fifth foul, which left the Crimson Tide with just four eligible players for the remainder of the game.

John Petty landed awkwardly on his ankle at the 10:30 mark and had to leave the game, which left Alabama with three players. They took the floor with just three and played Minnesota 3-on-5. With all of that, Alabama put on a show and a feverish comeback and only lost to the Golden Gophers 89-82. Freshman phenom Collin Sexton almost single-handedly won the game scoring 40 points.

It was a scene that I have never seen in my time covering college basketball.

I Finally Saw BYU In Person And I Am Impressed

Over the last few years, BYU has appeared on ESPN at least once a week it seems. Going back to the days of Jimmer Fredette, the Cougars always played the late game, usually on a Thursday night. I began to question why this team received so much exposure. Other West Coast Conference teams, like the University of San Francisco, never appear on the ESPN family of networks. This weekend was my opportunity to see them live for the first time and I will say that I know why they appear on television often.

Under Dave Rose, BYU has had 12-straight 20-win seasons and are consistently in the hunt for the West Coast Conference crown. In the Barclays Center Classic, the Cougars lost to Alabama on Friday, but their fortunes changed on Saturday. Down for the duration of the game, BYU came from behind to defeat UMass 68-66 to salvage their weekend in Brooklyn. BYU outscored UMass 40-28 in the second half and grabbed 19 rebounds in the victory.

The Cougars have an exciting team. Even when one of the team’s leading scorers go 0-for-10 from the field (TJ Haws), they can grind out a win. I understand why BYU is on TV so often now.

Are We Seeing A Renaissance Of The Big Man?

In basketball, we have started seeing a shift away from the power forwards and centers who play near the basket. Teams in both college and the NBA want big men who can stretch the defense and shoot perimeter shots. Gone are the days of Moses Malone and Shaquille O’Neal roaming the paint and causing havoc. Over two days of the Barclays Center Classic, two young men showed that the big man in the middle could be coming back.

Minnesota’s Reggie Lynch (6’10”, 265 lbs.) and UMass’ Rashaan Holloway (6’11, 310 lbs.) are two players that show that low past basketball is still a thing. Holloway picked up 16 points and eight rebounds against BYU while Lynch finished with eight points and 10 rebounds against Alabama. It may be a pipe dream in the era of basketball we are currently in, but these two players showed that bruisers inside with size still has a place in the game.

One of the biggest storylines for the many of the early season tournaments has been the attendance. The first day of the Barclays Center Classic was played at an on-campus venue. Saturday it was back at Barclays Center, and the crowds were fantastic. Attendance may not have been what the organizers wanted, but the fans from all four schools made it feel like there were 19,000 fans in the arena.