Five Things NY Red Bulls Must Do This Season

Last season was something of a mixed bag for the NY Red Bulls.

While 2017 did yield a U.S. Open Cup final appearance – their first since 2003, when they were known as the MetroStars – they lost 2-1 against Sporting Kansas City in the showpiece final. Furthermore, the high of reaching a cup final was leveled by the low of finishing sixth place in the Eastern Conference, followed by elimination at the hands of eventual MLS champs Toronto.

In what will be their 22nd season, the Red Bulls know their championship window is closing fast. Their squad is a mix of aging veterans and young starlets, making this season all the more intriguing. We’re a little over a month before the season starts, and if things fall into place, this season could be magical – here are five things the NY Red Bulls must do: 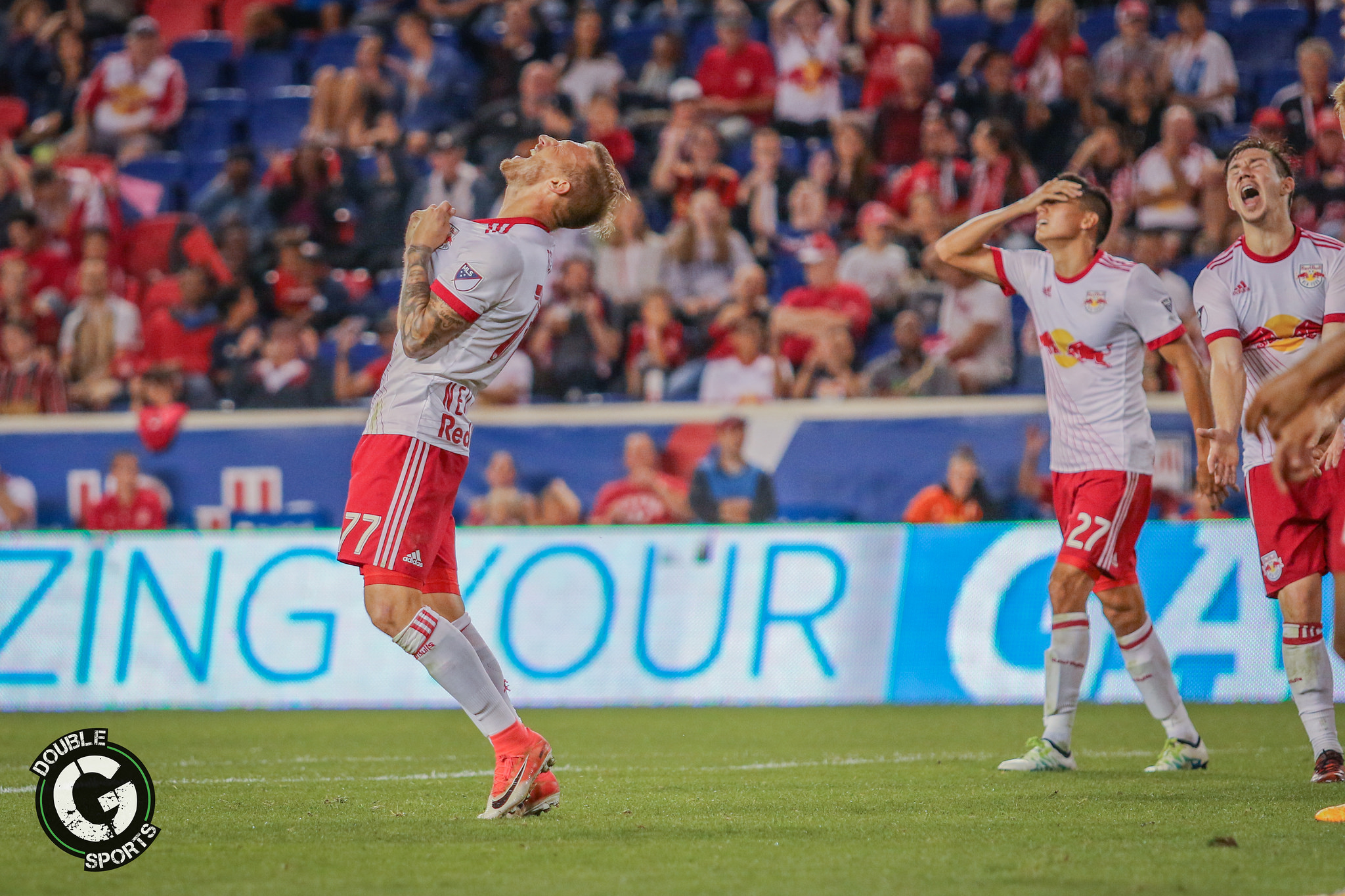 Depending on how you look at it, the NY Red Bulls will face a few tough hurdles to begin the season. Their opener at home against the Portland Timbers will fine early test for both teams. After that, they face the likes of Orlando City, Houston and Chicago throughout the first two months – before opening the month May at home to New York City.

Simply put, it’s imperative that this club gets off to a hot start. Historically, Jesse Marsch’s men haven’t started all that well under his tenure, and that needs to change. Take a look around the Eastern Conference and nearly every club – Atlanta, Toronto, NYCFC, Orlando, Columbus – have all improved. You wouldn’t be wrong to bet on one of those aforementioned clubs winning it all this year.

And even with all that said, the Red Bulls can still hang with the best of them. Have they improved? It remains to be seen, we’ll get a good look at them when before the MLS season starts as they face CD Olimpia in the CONCACAF Champions League. However, the first 10 league games will give us a good sense of what this team is, a hot start to the campaign will be just the boost this club needs.

2) Ditch Three At The Back 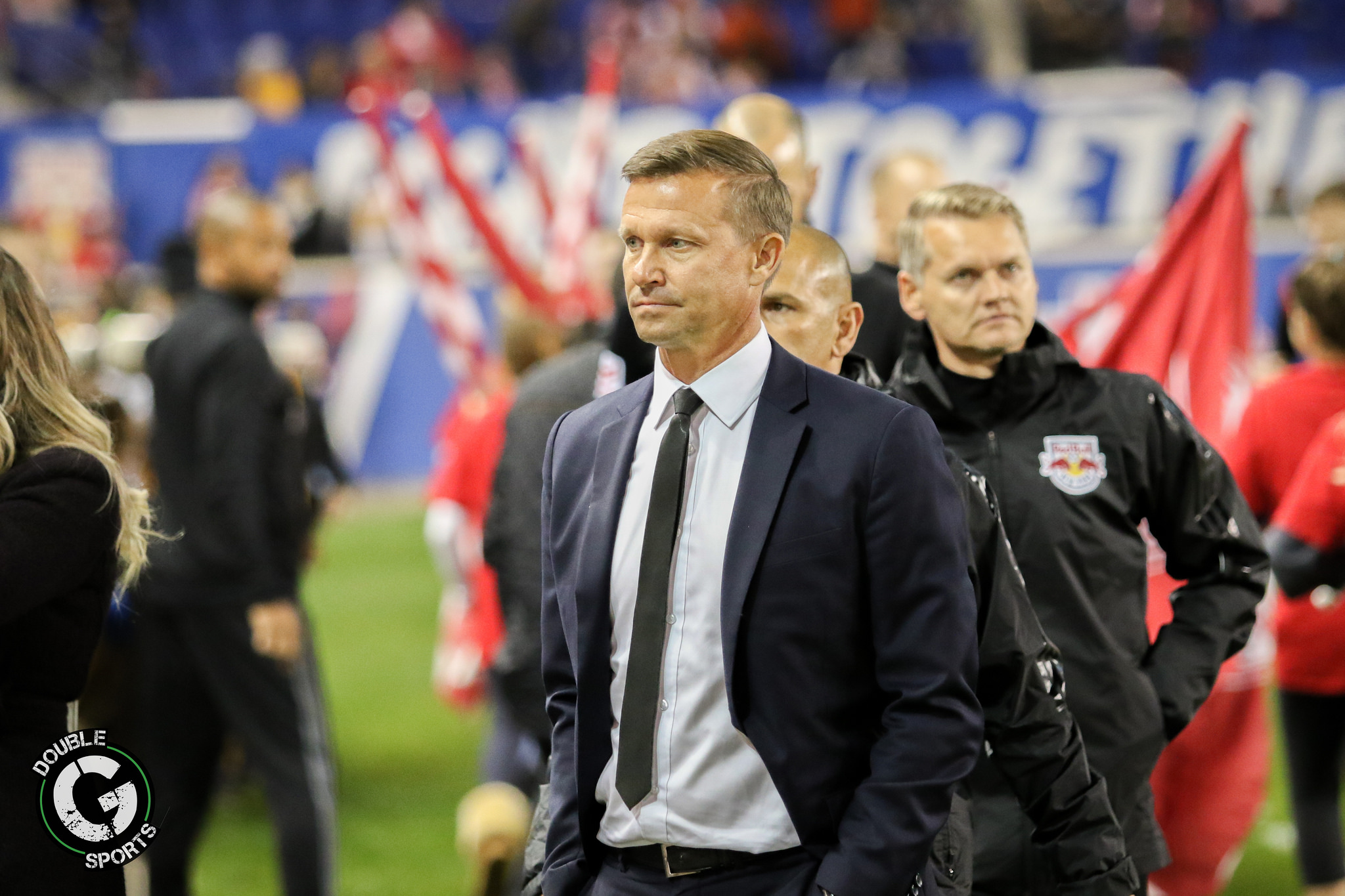 It was cool when Chelsea and Antonio Conte were doing it last season as they strolled towards the Premier League title. Then Arsenal started doing it, and all of a sudden, the NY Red Bulls adopted it for most of last season: a 3-5-1-1 formation.

And while that formation gave the club a new dynamic of attack, probing wide areas and working better passing angles in the middle of the field, it also gave the opposition the upper hand when it came to the counter attack. It’s time to give up three at the back and stick with either a fluid 4-3-3 or 4-4-2 – there’s no one at the club at the moment that can work in the hole behind the striker as a number 10 in a 4-2-3-1. Playing with three central defenders kills depth, there were times where Connor Lade had to play at the heart of the defense, constantly losing headers to bigger strikers.

4-3-3 gets the best out of their midfield, with players such as Felipe, Sean Davis, Vincent Bezecourt, even Alex Muyl can give it a go. 4-4-2 is more balanced with two strikers – mainly Bradley Wright-Phillips and new acquisition Carlos Rivas, and who wouldn’t want to see Tyler Adams whip crosses from the right?

Jesse Marsch may have to realize that a simple tweak in formation can get these players to press more collectively, while not have to race back when they’re behind numbers-wise on the counter attack. Hopefully an injury doesn’t convince him to do so.

3) Give Youth A Chance To Shine 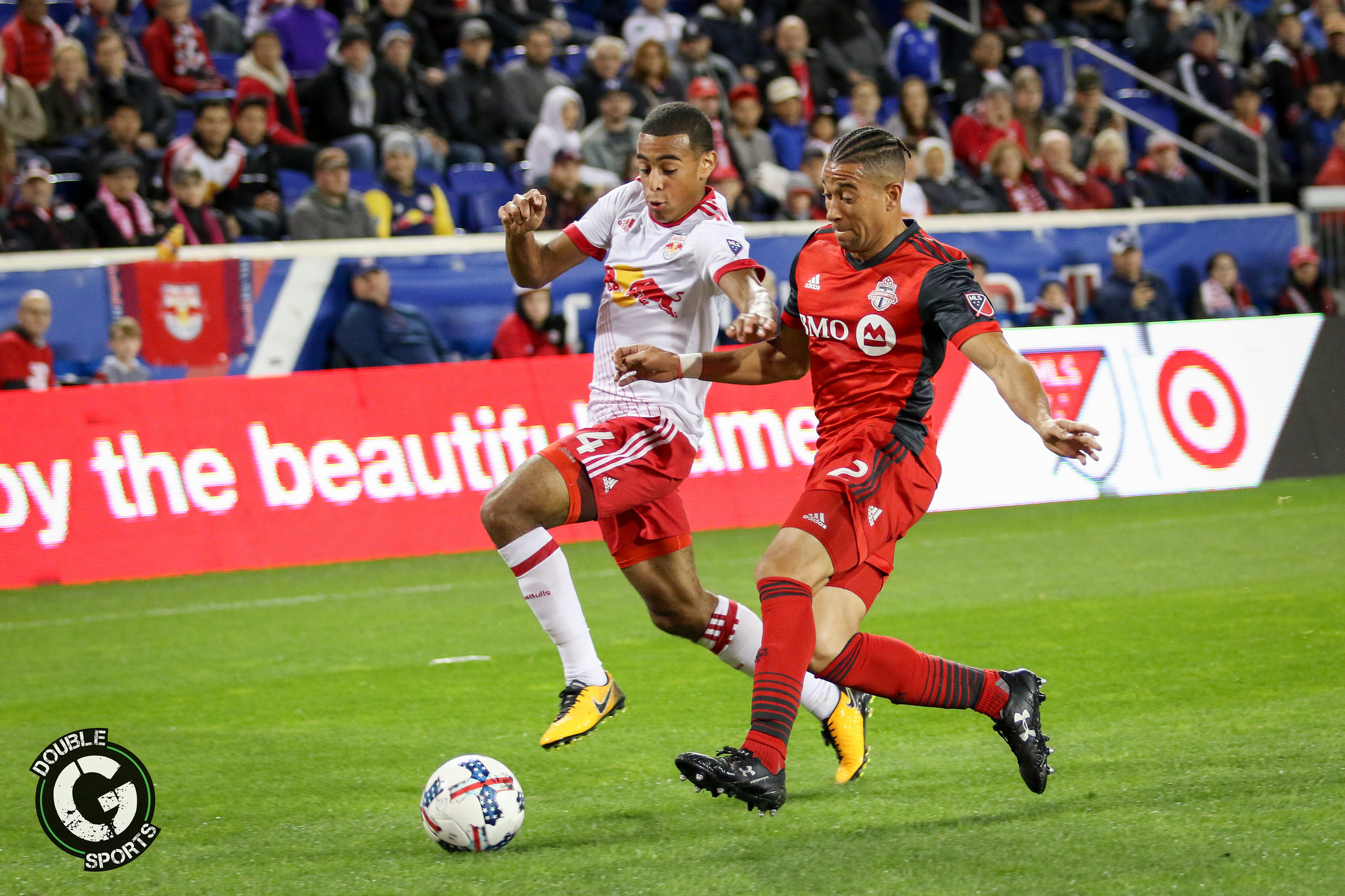 This club traded then-captain Dax McCarty to Chicago, and this squad got younger as a result. They recently traded another captain, Sacha Kljestan to Orlando, and the team has gotten younger. Now, more than ever, the kids will have to make the most of their opportunities.

It could start as soon as the match against Olimpia. Draft picks such as Brian White, Niko De Vera, Tom Barlow, Tommy Redding will surely get a look this year against MLS opposition. Last year’s U.S Open Cup run gave goalkeeper Ryan Meara a chance to shine when he started every game, including the final. Tyler Adams and Alex Muyl stood out, especially the former, who turns 19 this February but was incredible as a right-back, central midfielder and winger. Muyl handled himself well with this dribbling, and sharp runs, he’ll have to improve his end product but Marsch certainly favors him and could be penciled in to start opening day.

The biggest question, which has become the case in recent seasons, is who gives Bradley Wright-Phillips a rest? The club legend turns 33 in March, his legs got heavy during the latter stages last season, so Marsch will have to select when to rest the club’s all-time leading goalscorer. It could be Rivas, the 23-year-old Colombian, Stefano Bonomo, or even Derrick Etienne Jr., who came in for Wright-Phillips as a substitute a handful of times last season.

Nevertheless, youth will most definitely be served for the NY Red Bulls this season. 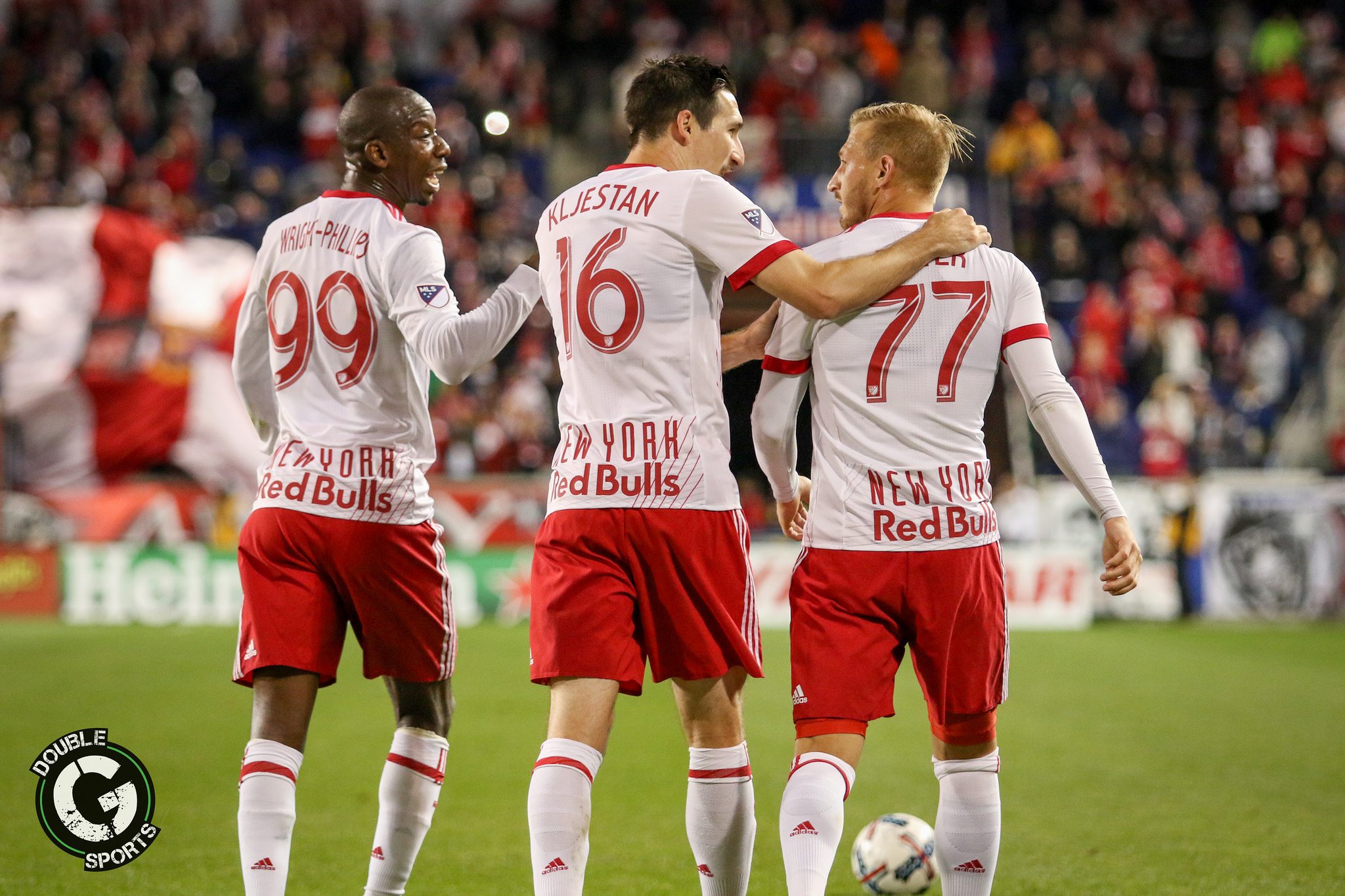 He’s the club’s all-time assist leader, he led the Red Bulls with double-figures in assists since his return to MLS, and now he’ll have to be replaced by the club that traded him.

It’s a bit of a shame this trade happened and went so suddenly, a fine servant for the club, he was largely criticized for his performance in big games – mainly the playoffs. His penalty miss against Montreal in 2016 could’ve changed the tide of that series, and against Toronto he publicly threw Amir Murillo under the bus and was sent off in the second leg. He’s recently come out and criticized the NY Red Bulls’ lack of difference makers during his time at the club, but what shouldn’t be lost in all this is that he’s now gone, and the Red Bulls must find a way to replace him.

Should they try to buy someone, Lee Nguyen of the New England Revolution would be a fine replacement. A crafty midfielder with an eye for a pass, he can slow the game down and links up play nicely. It’ll be hard to pry him away from New England as new coach Brad Friedel really wants to keep him.

Let’s not forget, the Red Bulls didn’t properly replace McCarty and suffered for it, hopefully they learn this time around. 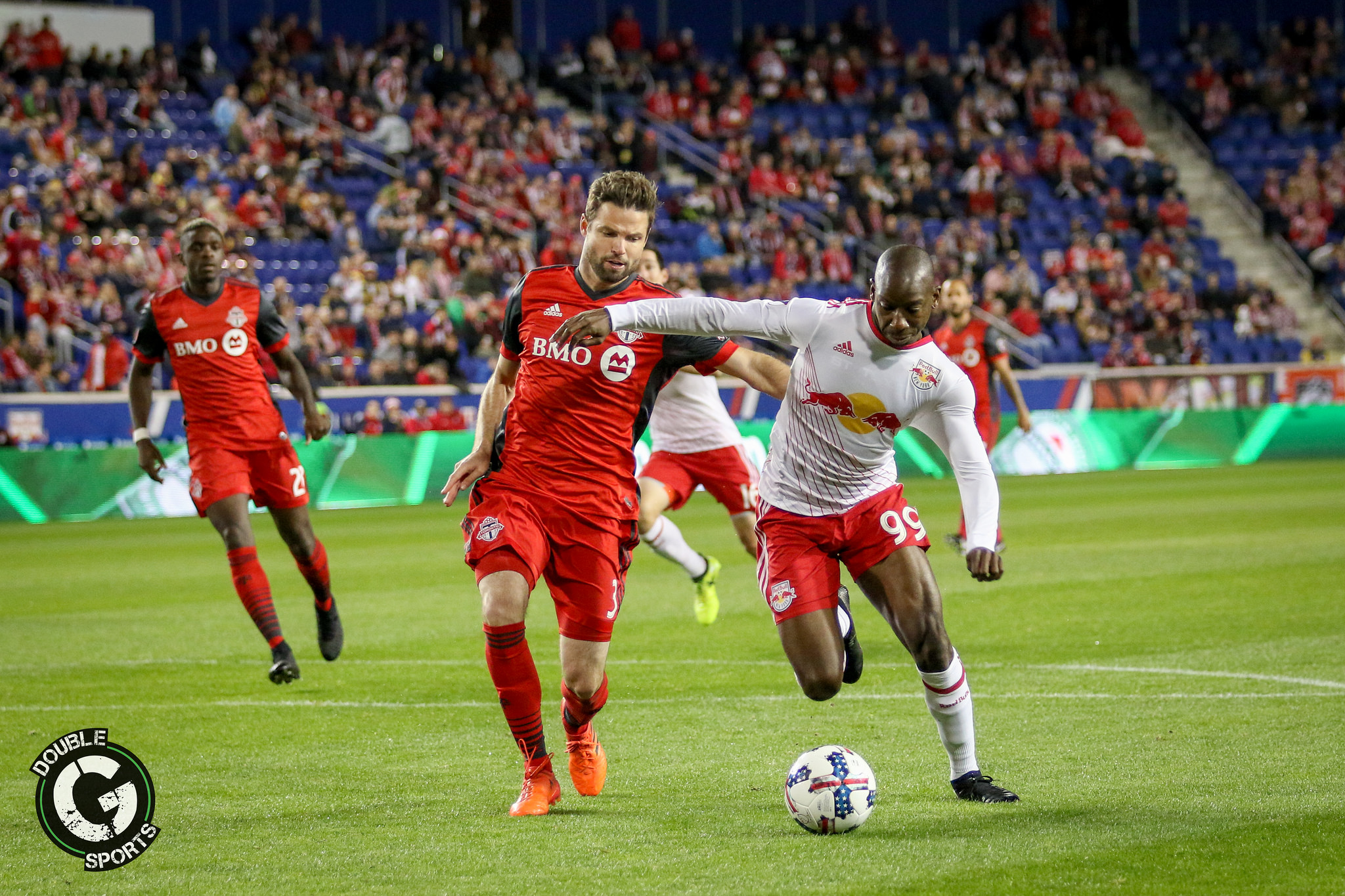 The window is closing, and it rarely stays open when it comes to hunting championships.

In what will be their 23rd season, the NY Red Bulls have tasted glory twice and flirted with it many times. The Supporters’ Shield back in 2013 became a landmark moment in the franchise’s history, it was their first ever MLS trophy, under club legend and then manager Mike Petke. That season ended in disappointed as they were bounced out by Houston in the playoffs. That same feat was accomplished two years later in Jesse Marsch’s first season as coach, and once again, the high of that trophy win ended in a disappointing low losing to Columbus in the postseason.

Last season would’ve kept the odd year pattern going had they beaten Sporting Kansas City in the U.S. Open Cup final, but they didn’t and now fans are wondering when the next trophy celebration will come. With a younger squad, that may feel like a while from now, which will upset a few supporters who’ve long starved to see this club lift silverware at the end of December.

In any case, now would be a year in which the NY Red Bulls prove doubters wrong by shocking everyone with a third trophy celebration.