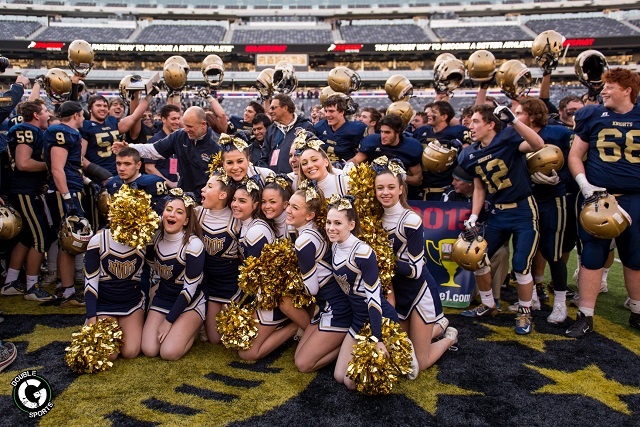 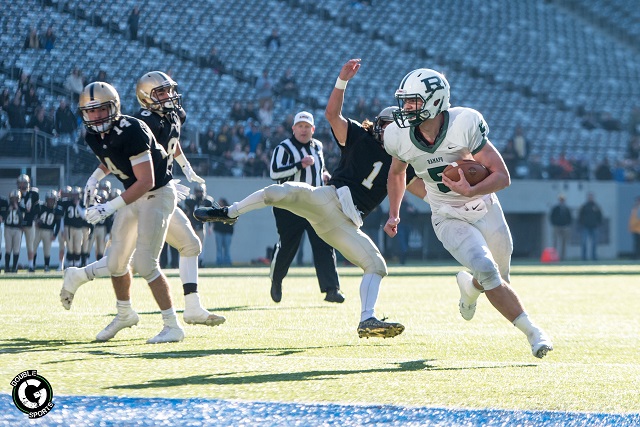 Senior quarterback Keith Woetzel did it both through the air and on the ground, passing for 204 yards and a touchdown while running for 117 yards and a score.

“Defense wins championships and we held them to 15 points due to turnovers” said Woetzel. “That got us into good field position and we capitalized. The offensive did a great job and reason for our success. We just pounded the ball in the second half and they couldn’t stop us. This is what we have been working for all fours years in high school and to achieve is the greatest thing ever.”

In the first quarter, Ramapo jumped out to an early 14-0 due to costly mistakes by River Dell. The Raiders defense came up with a stop on fourth down, plus a successful fake punt run by Woetzel. Faced with a fourth and goal at the two yard line, Woetzel faked a handoff and snuck into the end zone for the first points of the game. A fumble by Golden Hawks senior quarterback Dylan Connolly that was recovered by Joe O’Hagan gave Ramapo the ball in River Dell territory. On third and five at the 22, Woetzel squeezed a pass between two defenders to Ryan Curtiss who galloped in for the touchdown.

“Our senior skills players Latushko, Curtiss, O’Hagan, Woetzel stepped up early and in the second half our offensive line took over,” said Ramapo head coach Drew Gibbs. “We changed up our scheme to prevent the big play. We thought their triple option offense would turn the ball over and struggle to score against us in the red zone. I thought the last five weeks we were a dominant team.”

The Golden Hawks got on board in the second quarter with a nifty reverse play and Estevez rumbling into the end zone trimming Ramapo’s lead down to 14-3. However, senior Greg Latushko drained whatever comeback hopes River Dell had on the ensuing kickoff going straight up the middle and scampering 86 yards virtually untouched pushing the advantage up to 21-7.

On Ramapo’s first possession of the third quarter, it only took 38 seconds for Woetzel to connect on a 27-yard touchdown pass to a wide open Dan Diaz extending the margin to 28-7. Late in the quarter, O’Hagan scored the first of his two touchdowns on the day, spinning and powering his way into the end zone widening the lead to 35-7. O’Hagan carried the ball 21 times for 106 yards.

Ramapo won its tenth sectional title, seventh since 2001 and first since 2012. 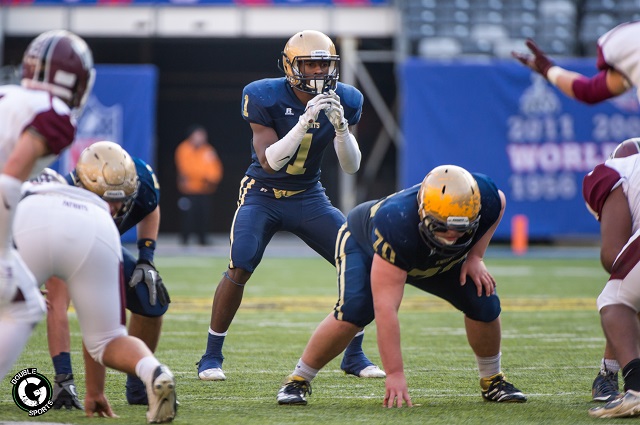 The last time Old Tappan played Wayne Hills in a sectional championship game at Met Life Stadium, the Golden Knights watched the Patriots play without nine suspended players and score 15 unanswered points in the second half. Searching for their first sectional title in 30 years, this marked the first undefeated season in school history and set a record for most wins in a season with 12.

“If you go 12-0, you’re a special team,” said Old Tappan head coach Brian Dunn. “Jordan plays like a man out there but we have a lot of great players on this team who made lots of contributions today.”

New Jersey’s Gatorade Player of the Year, Jordan Fuller, kept the Patriots off the scoreboard late in the first half, intercepting a pass in the end zone. With 8:30 left in the third quarter, Old Tappan started at their 48-yard line. Fuller kept the drive alive gaining two yards on a fourth-and-two play and bursting through 19 additional yards moving the ball down to the 23. On first and 10, Fuller lobbed a 23-yard TD pass high into the air to Jedh Downey.

“We finally got over the hump today as the past few years we lost in the semifinals,” said Jordan Fuller. “We knew the X’s and O’s and had to just execute and get more physical. We knew the momentum was changing when we got the first points on the board and gave us confidence.”

On Wayne Hills ensuing possession, a bad exchange led to sophomore Stephen Crevani recovering the ball. On third and seven from the 10-yard line, junior quarterback Kevin Martinez lofted a 10-yard strike to Downey, making it 14-0 with 2:33 left in the third quarter.

Last year, Passaic Tech watched Montclair hoist their third consecutive sectional championship. Seeking their first state title since 2001, the Bulldogs were not denied this time around, using a smothering defense that had just allowed 86 points in 11 games, recorded five shutouts and held nine out of eleven opponents to one score or less.

“We wanted to prove today we are a great program and not just a one year team,” said Passaic Tech head coach Matthew Demarest. “We always have been a good defensive team and have been able to sprinkle in some offensive players. You got to see one of the best players in the state in Yassir Thomas. We had to make sure Ridgewood worked for yards.”

In the fourth quarter, Cuavers and Thomas hooked up again on a 26-yard score making it 20-0. Sophomore Rhazeer Jones finished off the scoring, picking off a tipped pass thrown by Ridgewood freshman quarterback Jack Barclay and returning it back for a 65-yard touchdown.

The Bulldogs took the lead in the first quarter, embarking on a 10-play, 77-yard drive consuming 4:39 off the clock that was capped off by a two-yard score from junior running back Kevin Copper. Passaic Tech held the Maroons offense to 175 yards of offense and only allowed four plays of 10 yards or more with the longest gain being 12 yards.

With nine sectional titles under their belt and searching for their first since 2006, Middletown South (12-0) was hungry for a championship. Their offense, that had been averaging 41.5 points a game, got off to blazing start with junior Jeff Landowski returning the opening kickoff 88 yards to the Phillpsburg 9-yard line. Two plays later, Eagles leading rusher Cole Rogers found the end zone by the left pylon for the first score of the game, just 47 seconds into the 1st quarter.

“I thought we did a great job putting 35 points up on the board tonight,” said Middletown South head coach Steve Antonucci. “In previous years we fell behind and tonight we got off to a good start and had talked about getting the momentum early. Dylan Rogers proved to me tonight he is one of the best linebackers in the state and a damn good football player.”

From that point on, senior quarterback Matt Mosquera took over, throwing two touchdowns passes and adding another score on the ground. Going for it on fourth and seven at the Stateliners 28-yard line in the second quarter Mosquera connected with  junior Jeremy Joyce, making it 14-0.

In the third quarter, sophomore Joel Vargas picked off a pass thrown by Phillipsburg quarterback Zachary Ringoff. Four plays later Rogers would add his second score of the game, increasing the lead to 21-0 with 8:24 left in the quarter.

Rogers finished the game with 155 yards on 27 carries.

“Matt is the leader of the offense and got the job done,” said Cole Rogers. “They say defense wins championships and tonight they had so many stops and credit them for pulling their weight. We wanted a big lead so we could feel comfortable on this big stage. We carried it all the way and very exciting to be the top in the state.”

The Eagles defense found a way to bottle up the Stateliners offense much of the game, led by Dylan Rogers’ four and half sacks and Vargas’ two interceptions. Phillpsburg was held to 24 yards on 20 carries in the first half.

Don Bosco Prep Gets Back On Top and Mahwah Tastes Glory For First Time Since 1981
With Henry Taking 2015 Heisman, Is McCaffrey The Early 2016 Favorite?