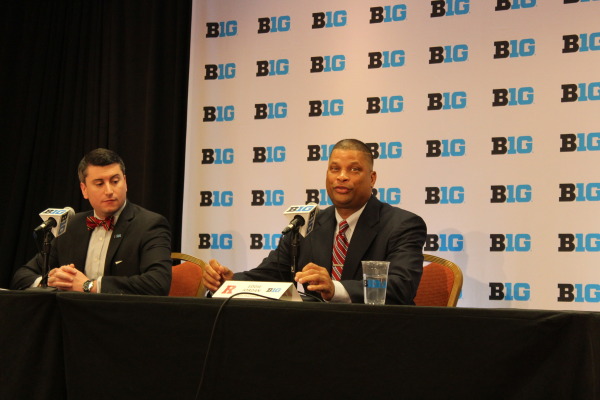 Following its most recent defeat to Iowa last Thursday, the Rutgers men’s basketball team came into its contest against Michigan with one goal in mind – compete.

The Scarlet Knights’ losses in Big Ten Conference play have been nothing short of embarrassing, having lost all seven contests with the closest margin of defeat being seven points.

But Wednesday night’s game against Michigan showed a different Rutgers team. Despite losing 68-57, this squad of Knights, injury-riddled and slumping in the worst way, found a way to hang with the superior Wolverines all game.

This newfound competiveness was highlighted by none other than freshman guard Corey Sanders on a play in the second half.

With 11 minutes remaining in the second half and trailing by six, Sanders stole the ball and went untouched to the hoop for an emphatic dunk. It showed what this Rutgers team could be, and perhaps will be, in future seasons.

The Knights remained in striking distance of the Wolverines’ lead for the rest of the contest, but could not string enough effective offensive possessions together to mount a comeback.

In the first half, Rutgers jumped out to a quick 6-0 lead, and still found themselves in control with six minutes left to go before halftime. But Michigan shook off its shooting slump, and came alive from three-point range to go into halftime with a 34-27 lead.

The Knights were able to hang with the Wolverines for much of the game due to Michigan’s lack of any low post presence. Rutgers caught the injury bug in the worst way this season, as three of their four players in the frontcourt rotation have been lost for the season. But against the Wolverines, the

Although Michigan did not hurt the Knights in the paint, the difference in three-point shooting was the deciding factor in this contest. Michigan made 11 shots from downtown on 39 percent shooting, yet Rutgers managed to shot only 3-18 from long range.

While the Knights overall defense was effective in forcing Michigan to shot only 41 percent from the field, its inability to guard the three-point line cost them.

Even in defeat, Rutgers head coach Eddie Jordan has to be more satisfied in how his team has come out in these past two contests. After a stretch of consecutive blowout losses, the Knights have played with a competitive fire to hang with their last two opponents.

It is that competitive drive that will be the difference for Rutgers in earning its first conference win of the season.