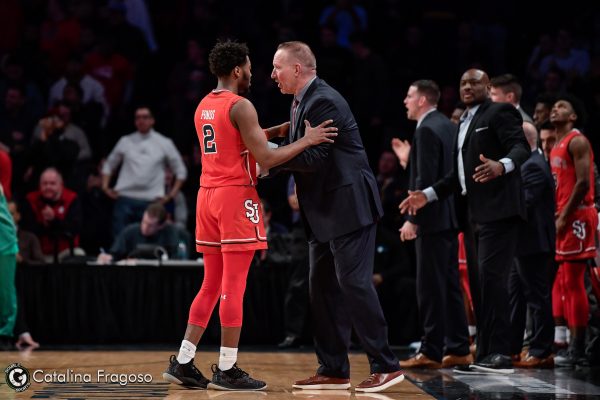 The First Four matchup between St. John’s and Arizona State was one of the worst games in tournament history.  Even though the Johnnies had plenty of opportunities to come back in this game in the second half, they failed to capitalize on ANY opportunity Arizona State gave them.

It was a poor game by two teams who didn’t even look like they deserved to be the last two teams in the tournament.  Arizona State kept looking to give the gave away with multiple turnovers and bad possessions, and St. John’s looked like they didn’t play with each other the entire season.

If St. John’s didn’t have Shamorie Ponds, they would have lost this game by 30 points.  Nothing was falling for the Red Storm and at one point in the first half they didn’t score for nearly eight minutes.  They were getting beat down low all game and the athleticism of Luguetz Dort and Zylan Cheatham overwhelmed them.

Even though technically St. John’s had more rebounds both in the first half and overall, they couldn’t capitalize on any of their rebounds and their complete lack of offense came back to bite them in the end.  If St. John’s had even hit three more of their 30 three pointers taken, they would have been tied.

Well the second half started out more of the same.  St. John’s getting dominated by the athletic duo Dort and Cheatham, but they somehow kept bringing it back to an eight to ten point game.  At one point with around four minutes to go, the Johnnies actually had cut the defecit to five points.

Unfortunately, even when Arizona State tried to give the game away the Johnnies couldn’t buy a bucket.  Whether it be a contested shot, poor shot selection (which was a problem all game) or a costly turnover, St. John’s just didn’t have an answer.  There was a ton of panic in St. John’s game and they just couldn’t get it going the entire night.  They were lucky this was only a nine point game.  Any good team would have blown them out of the building.

St. John’s season is now over and they look forward to hopefully another year of Shamorie Ponds and a renewed energy.  This team did just enough to make it to the NCAA Tournament (literally, they were the last team in) and have a lot to build off of.  One more year of coaching experience for Chris Mullin will do him well, as will the experience of making the NCAA Tournament.  The next step for this program is an NCAA Tournament win.  They’ll have to wait until next season to make their mark.