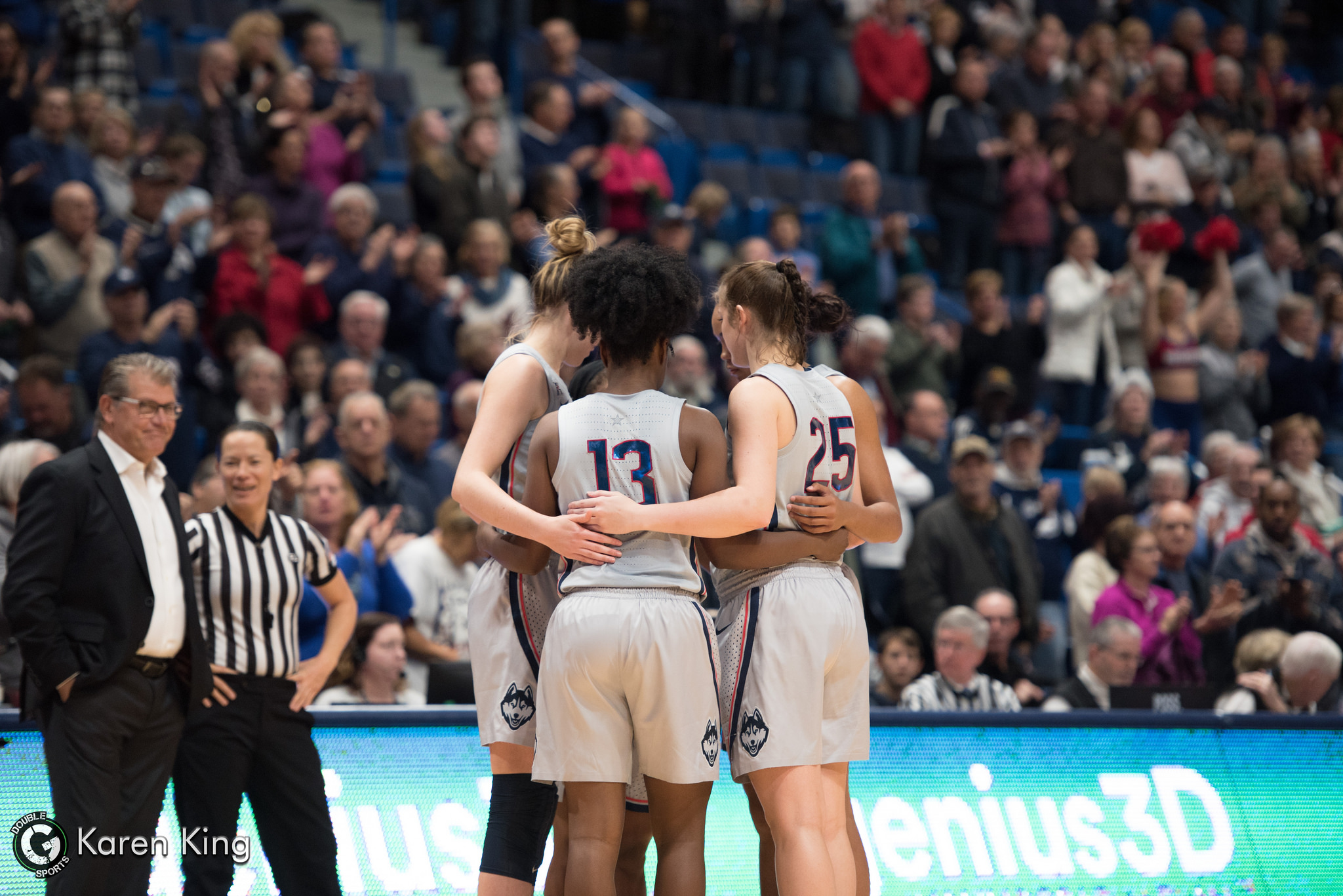 Coming off a gritty Sweet 16 victory against UCLA on Friday night at the Times Union Center in Albany, New York, the UConn Huskies (35-2) faced off against the Louisville Cardinals (32-4) in the Elite Eight with UConn having the opportunity to advance to a record 12th straight Final Four. Back on January 31, the Cardinals defeated the Huskies 78-69. Louisville was looking for a second consecutive trip to the Final Four and fourth overall in school history.

Early on in the first quarter it was a frenzy back and forth action featuring a series of runs by both squads. UConn jumped out to a 12-7 advantage only to see Louisville respond with a 7-0 run. However, the Huskies closed out the quarter on a 10-0 spurt to reclaim the lead.

The Huskies were red-hot from beyond the arc in the first half with Megan Walker knocking down three trifecta’s. Battling a back injury, Katie Lou Samuelson displayed no symptoms tallying 11 points while draining three triples as the Huskies took a 41-34 lead at half on 44 percent shooting from the field and canning 9 of 16 treys.

In the third quarter, Louisville trimmed the deficit to 42-38 with less than nine minutes left. UConn answered back, relying on the fast break and outscoring the Cardinals 19-4 to go up 52-43 at the 4:44 mark. Samuelson showed no signs of cooling off from three-point land, burying two more boosting the Huskies margin to 57-47.  However, Louisville closed out the period on a 6-0 run.

Held to 10 points through three quarter of play, Cardinals leading scorer Asia Durr caught fire netting 11 points as the contest became a three-point affair at the five and half minute mark. Samuelson went back to her bread and butter swishing down two more trifecta’s as the Huskies extended the lead to 72-63 with three minutes left on the clock. Not only effective from the outside, Samuelson proved to be clutch at the free throw line sinking two shots as UConn took its largest lead of the game with less than two minutes to go.

Just when it seemed the game was in the bag for the Huskies, Louisville stormed back with an 8-1 run narrowing the gap to 75-71 with 36 seconds left. UConn had difficulty hold on to the ball, committing three turnovers during the stretch. A lay-up by Arica Carter made it just a two-point game with 26.6 seconds but Samuelson displayed ice water in her veins and calmly drained two more free throws three seconds later.

A golden opportunity to cut the gap to two points, Durr missed two critical free throws while Napheesa Collier hit a pair of free throws. On the next possession for Lousiville, a back breaking turnover on an inbound pass led to Walker hitting one of two free throws to seal an 80-73 victory for the Huskies, a 17th consecutive win and 12th straight trip to the Final Four.

Samuelson finished with a game-high 29 points, 7 of 13 from the perimeter, 7 of 12 from three-point range and 8 of 9 from the free-throw line. All five UConn starters were in double figures, the team hit 14 of 26 three’s and 16 of 20 from the charity stripe line. Christyn Williams contributed 16 points, Megan Walker 13 points, Napheesa Collier 12 points and Crystal Dangerfield 10 points. Durr poured in 21 points for Louisville while Sam Fuehring added 15 points.

On Friday, April 5 at the Amalie Arena in Tampa Bay, Florida, the Huskies will play the winner of Notre Dame vs. Stanford.